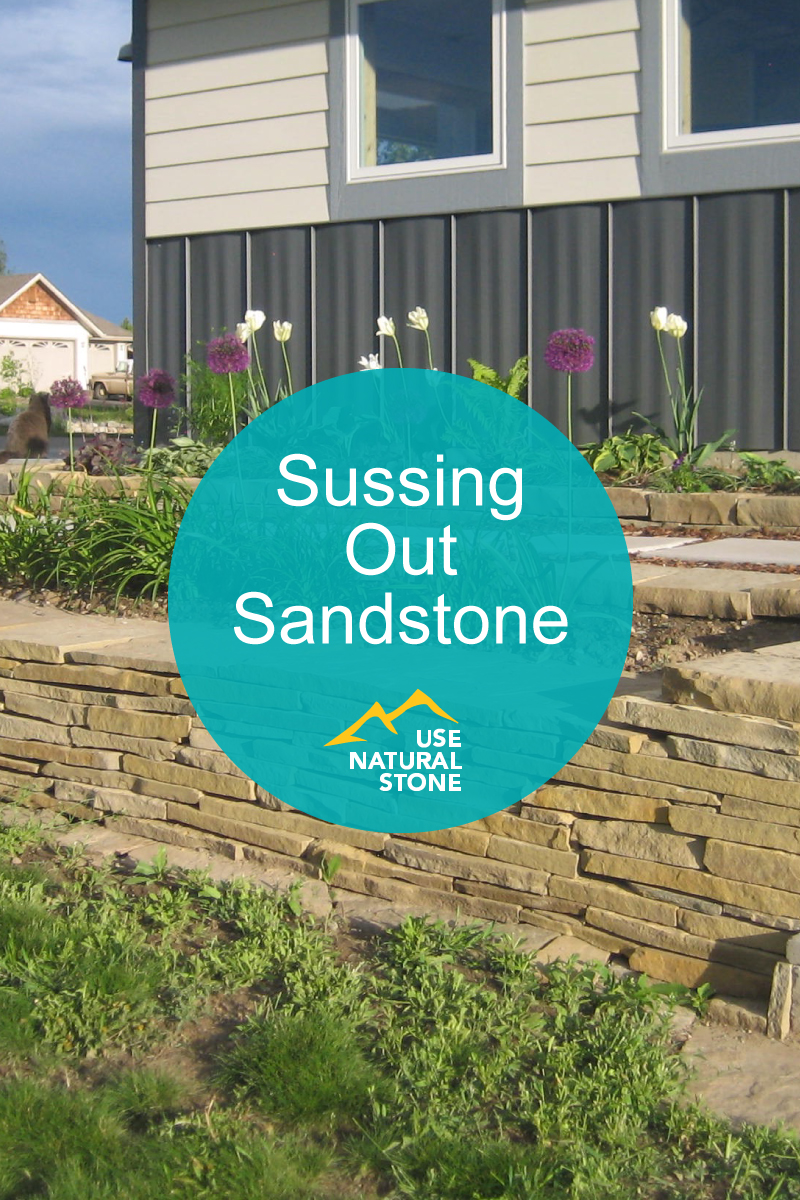 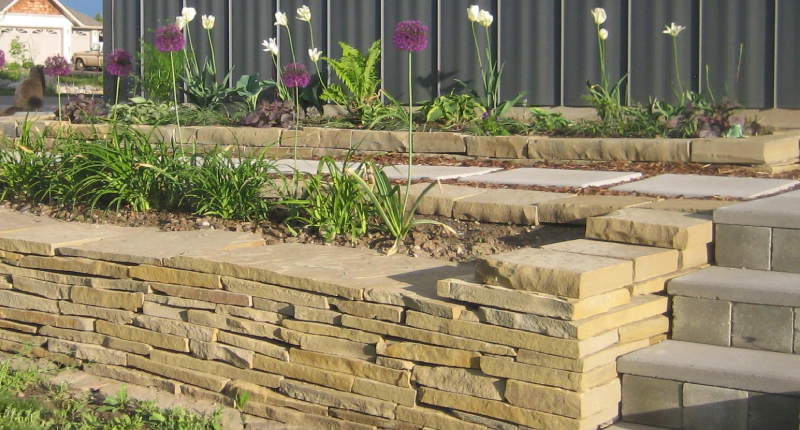 This is the stone that started it all for me. In the throes of a kitchen remodel, I ventured to the local stone yard and worked my way down a tantalizingly long aisle of slabs and remnants. My husband was wise to let me make the first cut on my own, because I had to admire, examine, and/or fondle almost every slab. Whoa, a pegmatite! Oooh, is that amphibole? Breccia, niiiiice! Ahhhh, my sweet marble (presses cheek up to slab). Oh hey, look at the fossils! Yep, I’m a nonstop stream of exclamation points when it comes to rocks. 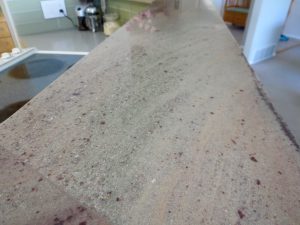 But of all those delectable choices, it was sandstone that stole my heart. Wild Sea. A grey to pale green color with graceful, swooping movement, showing how the water flowed just so, a few million years ago. I imagined gentle waves lapping across my kitchen, and of course, I could hardly wait to tell every houseguest about cross bedding and paleocurrents.

Sandstone sometimes gets a bad rap when it comes to its usefulness and durability, but all sandstones are not equal. Some sandstones are porous and not suited for indoor use, but they make excellent dimension stone and are a natural fit for landscaping projects. Other sandstones are dense and impermeable, making terrific countertops and backsplashes. Read on to learn about the all-important differences in sandstones.

Sandstone is made of… wait for it… sand

Presumably, you’ve wiggled your toes on a sandy beach or river bottom. So you’ve experienced the precursor to sandstone: sand. To a geologist, sand is any piece of mineral or rock that is within a certain size range. Sand is between 1/16th of a millimeter to 2 millimeters. That’s somewhere between fine sugar and coarse cornmeal. Particles larger than sand are called gravel or pebbles, and specks smaller than sand are officially called silt.

Sandstone, by the most basic definition, is any stone that’s made mostly of sand-sized pieces that have been stuck together into a solid rock. That loose definition leaves a lot of room for variation. What minerals are in the sand? How tightly is it stuck together? This is why you can’t lump all sandstones together.

Colors tell us where the stone was formed

For starters, it’s helpful to know what kind of sand we’re talking about. Far and away the most common type of sand is quartz, and hence the most common sandstone is quartz sandstone. Quartz sandstone can be white, light grey, red, yellow, or tan. It’s almost always light colored because quartz is clear or white. The colors come from the mineral cement that binds the quartz grains together.

If a sandstone is dark grey or dark brown, it’s probably made of something other than quartz. Bluestone is a well-known example of sandstone that’s made of feldspar, quartz, mica, clay, and rock fragments. Geologists call bluestone a lithic sandstone or “greywacke.”

Dark brown to dark red sandstones and brownstones are a mix of quartz and feldspar and have iron oxide cement. Red sandstones are significant in geology because they formed at times when the atmosphere had abundant oxygen. These “red beds” are also an indicator that the rock formed on land or in very shallow water. Sediments in deeper water are not exposed to as much oxygen, so they tend to be dark grey or black.

The thing that attracted me to Wild Sea was the pattern made as sand grains were carried along by currents. This is called cross bedding and it’s one of the hallmarks of sandstone. Cross beds look like graceful, diagonal lines that have a gentle curve to them. You know how water flowing over sand leaves a rippled pattern? If you were to slice down into those ripples, you’d see cross beds. The swooping layers show the direction the water flowed. 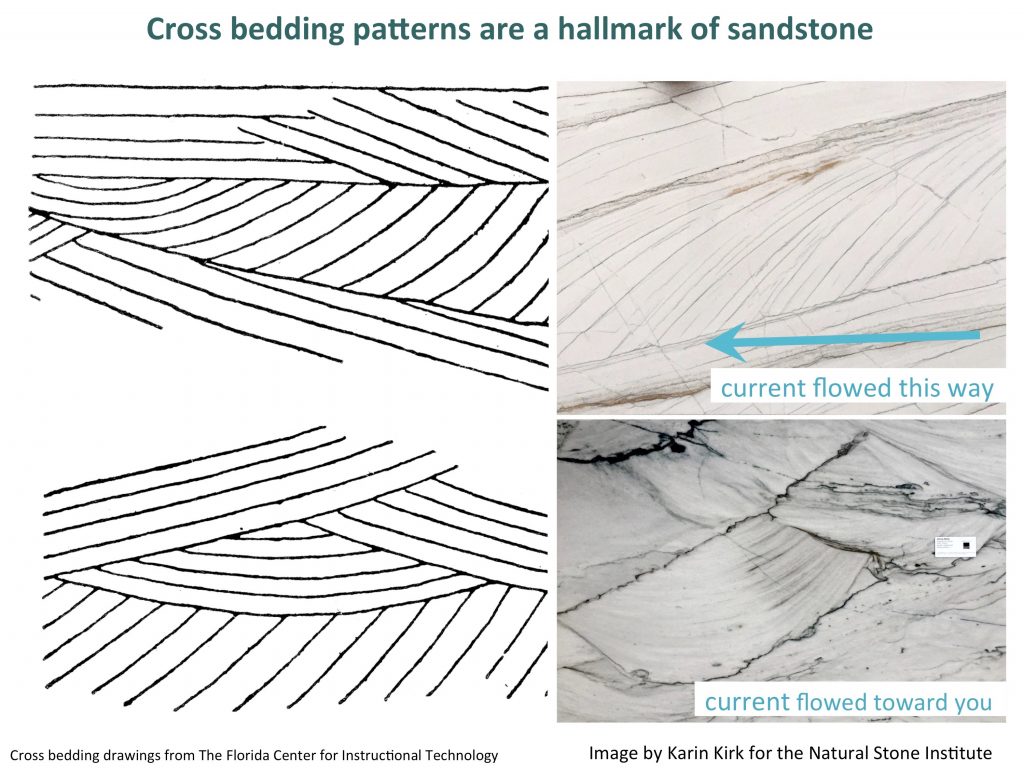 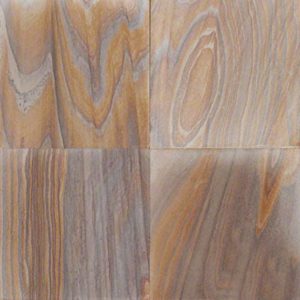 Geologic minutia like cross bedding may seem superfluous. Ah, but no. Cross-bedding is a quick and reliable way to recognize sandstone. This is especially handy because sandstones are sometimes labeled as quartzite or granite. Being able to recognize this distinctive pattern will help you understand what type of stone you’re dealing with.

Some sandstones, like Rainbow Teakwood, have a woodgrain look that is similar to cross bedding. These patterns are caused by dissolved minerals carried in groundwater and they’re called Liesegang rings. You know how a red wine stain on your mother-in-law’s best white tablecloth leaves a distinct, red outline at the farthest reaches of the stain? The same thing happens with minerals too, only with a lot less guilt.

Think of all the places you encounter sand—on a beach, in a river, or across a desert. These are the same types of environments that brought us sandstones.

The thing we love about sedimentary rocks is how they offer a glimpse into former worlds. Even a billion years ago, beaches and sand dunes formed the same way they do today. We can use what’s happening around us now to infer what happened long ago. That’s one of the fundamental rules of geology.

Sand can be deposited in vast blankets, such as in the Sahara desert. The Navajo Sandstone that spans Utah, Arizona, and Colorado tell us this was a Sahara-like desert during the Cretaceous Period. Massive cross beds, like those seen on sandstone cliffs in Zion National Park, are the remnants of huge sand dunes that marched across the desert floor.

Rivers carry sand, too, with bluestone coming from sandy river channels and river deltas. On the banks of rivers, floods deposit alternating layers of sand and mud. As floodwaters recede, the sediment dries out, shrinks, and cracks into polygon shapes. That’s what made Stone Wood and Palomino. The sand developed a network of cracks, and then dark brown clay filled in the cracks and created a stark geometric pattern.

Beach sand tends to be more pure that river sand, because wave action winnows out everything but the quartz grains. White sandstones like White Sea are most likely from former coastlines. Today, pure white sand can be admired on the beaches near Pensacola, Florida. Someday, those beaches will make a gorgeous sandstone (maybe for my next kitchen?).

How does sand turn into solid rock?

Loose sand can become a super strong stone, or one that’s disappointingly crumbly. It’s all a matter of how well those sand grains are stuck together. Groundwater circulates between sand grains, carrying dissolved minerals along for the ride. Over time, minerals fill in the spaces between sand grains and glue everything together. Geologists call this mineral glue ‘cement.’ The cement can be iron oxide, silica, clay, or calcite. More importantly, the cement can fill in all the spaces between the sand grains, or only some of them. When a lot of those spaces are left open, you end up with a porous sandstone. Some, like Rainbow Teakwood, suck up water like a sponge. Others, like Wild Sea, have very little pore space because minerals have thoroughly filled the spaces between the sand grains, making a low-porosity stone that will repel water. In general, the older the sandstone and the more deeply it was buried, the less porous it will be.

Given this big disparity in sandstones, it’s important to match the right stone with the right use. For interior use, like countertops, bathrooms, backsplashes, or flooring, you want a low-porosity sandstone. Fortunately, testing the porosity couldn’t be simpler: pour or spray some water on an unsealed sample of the stone and watch what happens. If the water readily soaks into the stone, it’s not a good candidate for use where the stone will get wet. If water doesn’t visibly soak into the stone but it leaves a dark spot, then the stone has moderate porosity, and would be safe for most uses as long as sealer is applied regularly. And if the water neither soaks in nor leaves a dark area, you’ve got a tightly-cemented sandstone that will resist whatever your 4-year old can throw at it.

Quartzite is a former sandstone 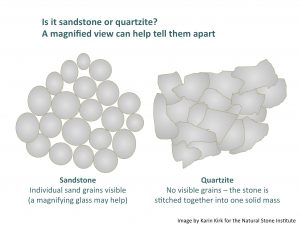 Quartzites start out as sandstone, and then they’re subjected to so much heat and pressure that the sand grains fuse together into one solid mass. Even if you look really close, you won’t see individual sand grains. This makes quartzite less porous than sandstone. That said, this process is not definitive. Some stones straddle the line between sandstone and quartzite. Usually this is recognizable by the patterns in the stone. If you can see cross beds, it’s either a sandstone or a quartzite that has only been subjected to a mild amount of heat and pressure. White Macaubus, Nuage, and Infinity White quartzites are examples of lightly metamorphosed quartzites, while White Sea ‘quartzite’ is actually a sandstone. So, regardless of the label, if a stone has cross bedding, check the porosity before falling deeply in love with it.

Many iconic buildings are made of sandstone 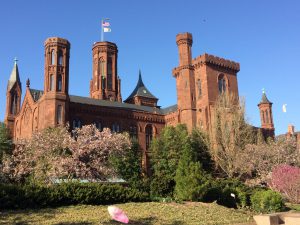 Sandstone on the Smithsonian Castle in Washington, DC.

Sandstone makes wonderful dimension stone, because it’s hard and impervious to the elements, yet it’s still relatively easy to cut, shape, and carve. That said, quartz-based sandstones and quartzites may require some additional fabrication costs due to additional time or tool wear, since the minerals are so hard. Sandstone buildings are commonplace all over the world, from Manhattan’s brownstones to Washington DC’s Smithsonian Institution to Jordan’s ancient Petra. The US is home to many productive sandstone quarries, such as the Potsdam sandstone in upstate New York, the Dakota sandstone in Colorado, and the Berea sandstone in Ohio.

The University of Wyoming in Laramie takes sandstone construction to a whole new level. They have their own sandstone quarry near campus, with a ready supply of dimension stone. Most of the campus buildings are made of this stone, tying together the campus and lending a native feel to the architecture.

Sandstone is versatile for landscaping

Sandstone has a special place in outdoor spaces. It’s easy to work with and it naturally cleaves into flat slabs for patios, stepping stones, and stone walls. The grainy texture offers grip in wet weather, and it’s manageable to work with as a DIYer. Local sandstones are readily available in most places, and each region has its own sandstone vernacular. In Arizona, red sandstone slabs are a proper fit. Sienna Buff, Sienna Grey, and Moss Rock all hail from southern Colorado. In the northeast, bluestone is right at home.

Here in Montana, I’ve become somewhat addicted to working with our native Frontier sandstone. Most years I buy a couple tons of it and have way too much fun building walls, borders, and pillars. My husband jokes that soon our entire property will be covered in sandstone. Like that’s a bad thing? 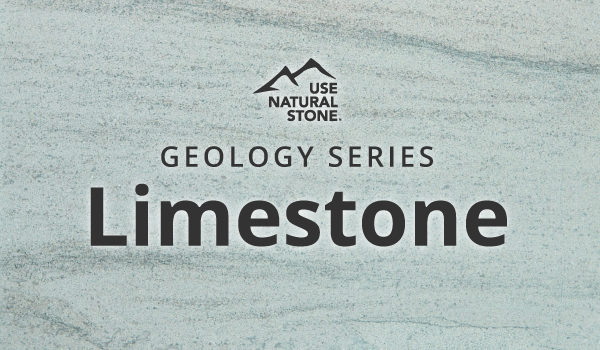