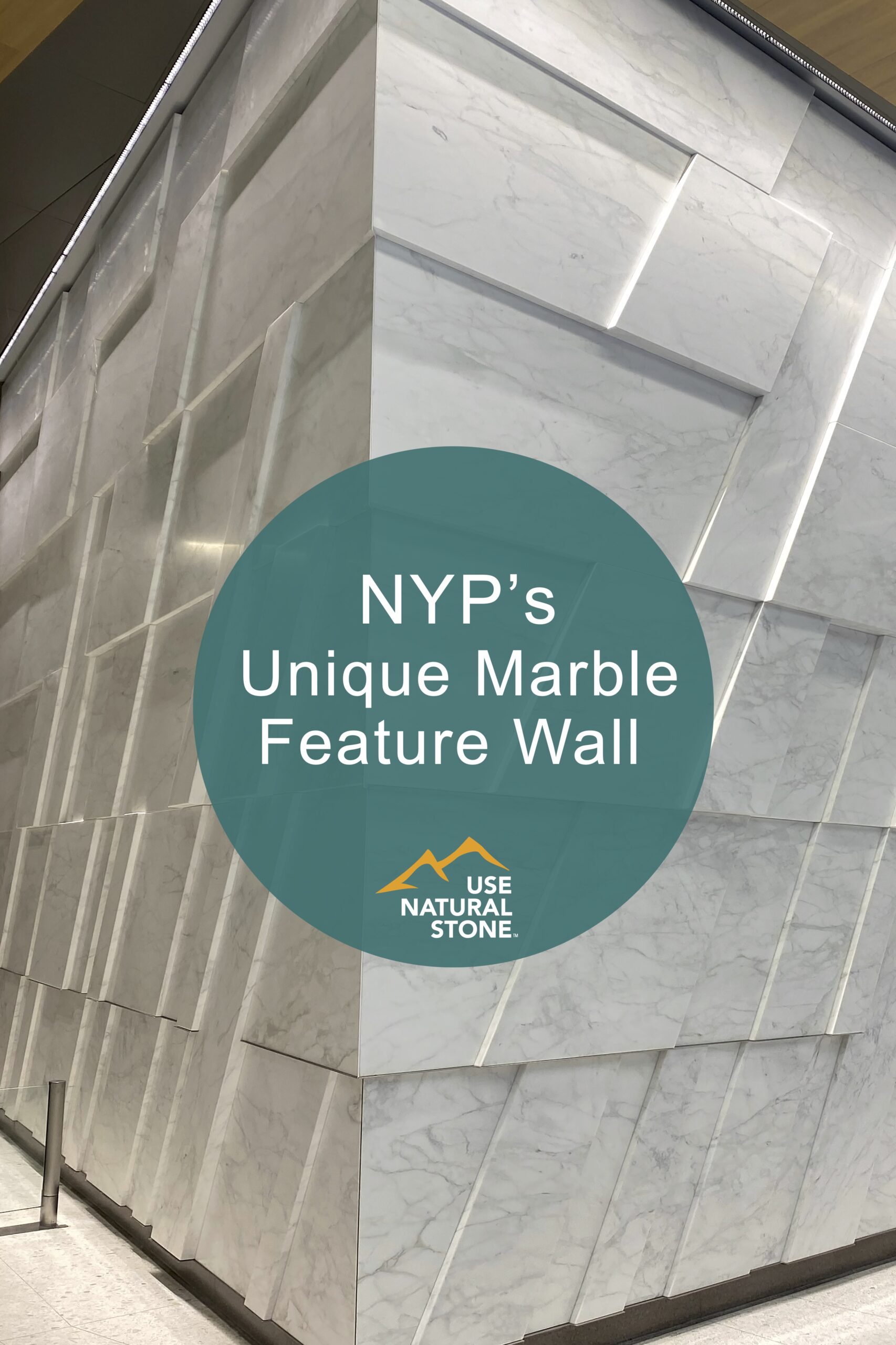 An earlier version of this article appeared in the Spring 2022 edition of Building Stone Magazine. Photos appear courtesy of Jantile Specialties LLC.

Occupying almost an entire city block in the Park Slope neighborhood of Brooklyn is the NewYork-Presbyterian Brooklyn Methodist Hospital Center for Community Health. The new 400,000-square-foot building, which took the last decade to construct, was designed using a variety of sustainable materials, most notably the Calacatta Caldia marble that adorns the walls, reception desk, kiosks, café counter, and credenza in the main lobby.

Upon entering the lobby, guests are greeted by an 18-foot-tall feature wall, created using honeycomb-backed Calacatta Caldia panels. Custom cut into different sizes, the panels are installed in an overlapping staggered pattern, offering a contemporary aesthetic in a classic material. Because the wall is positioned like a corner, with the unique design wrapping around one side to the other, it is visible from all parts of the lobby, serving as the architectural focal point. 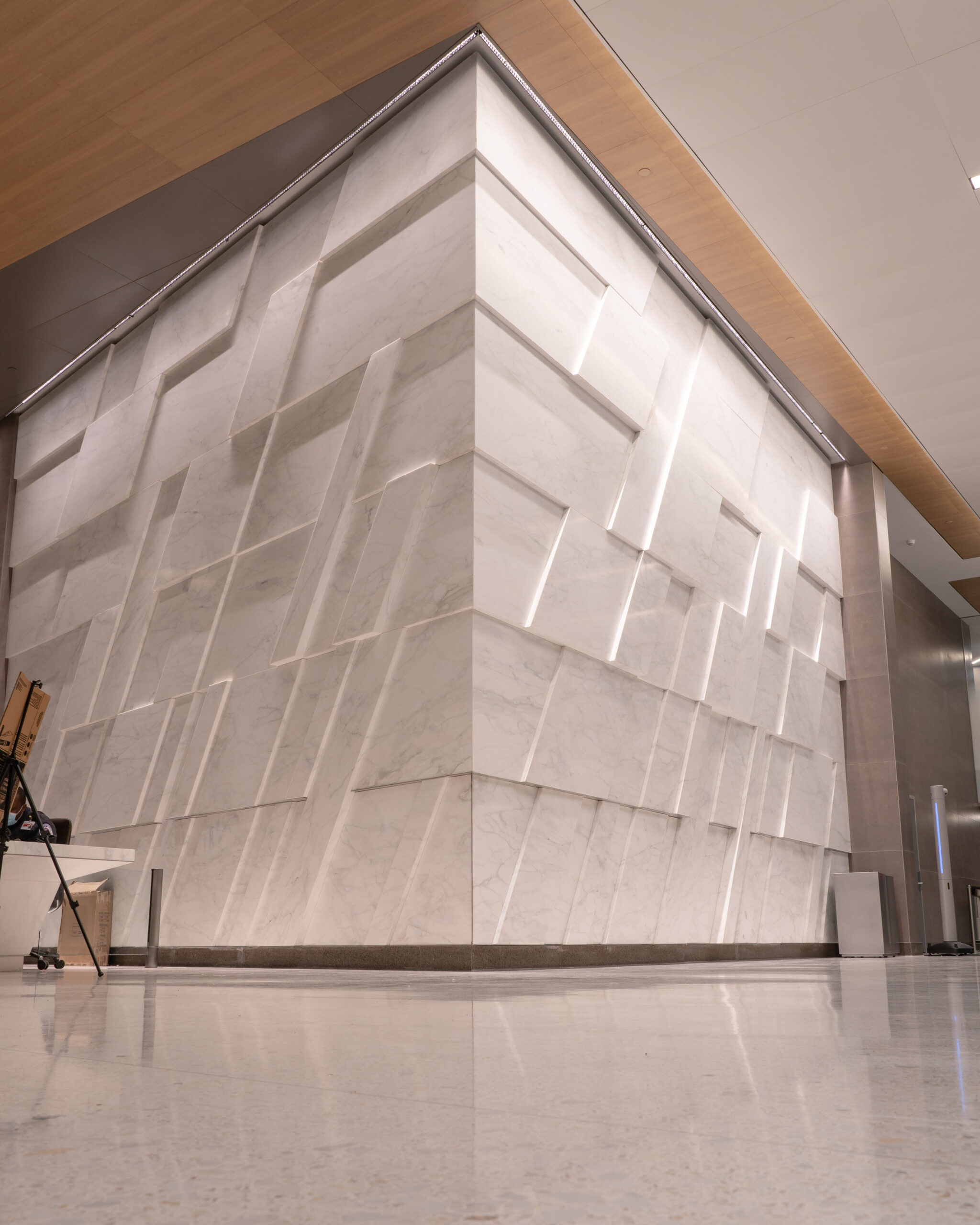 “We developed several different schemes and looked at a variety of different materials [for the feature wall], including large-format tile, mosaic tile, wood, glass, and backlit glass, and we proposed one in stone,” said Steven Wright, Associate Principal at Perkins Eastman Architects in New York, NY. “One of the clients’ requirements was that there shouldn’t be any horizontal shelves for dust to collect on because it’s an infection control issue. Our team, which included Senior Associate, Rico Stanlay, came up with the design for the stone wall. We were all in agreement that this design warranted special treatment and stone would be that material.”

The feature wall consists of 106 custom-made Calacatta Caldia marble panels assembled into six tiers, each partially cascading over the panel beneath it.

“Because the stone panels are three-dimensional, we had to get the grain to work around all the corners so when they were laid out, the grain would wrap all the exposed corners to make it look like massive chunks of stone,” Wright explained. “We were not consciously trying to mimic the look of a stone quarry, but there is a strong affinity between the different graining patterns and those square cuts.”

To harmonize with the wall’s design intent, the 20-foot-long, angular reception desk utilizes the Calacatta Caldia in a 2-cm-thick format. Adjacent to the wall and reception desk are two check-in kiosks and a credenza, which were also crafted from the 2-cm Italian marble.

Around 3,000 square feet of the stone was used for these elements, which was supplied by Marmi e Graniti d’Italia (MGI) in Massa, Tuscany.

The team at Perkins Eastman collaborated with the client and stone contractor, Jantile Specialties, who helped procure the Calacatta Caldia. “The client purchased this specific block for another project and since it was not utilized for that site, the client wanted to incorporate it into NewYork-Presbyterian Brooklyn Methodist Hospital,” said Jennifer Coyne, project manager at Jantile Specialties in Armonk, NY. 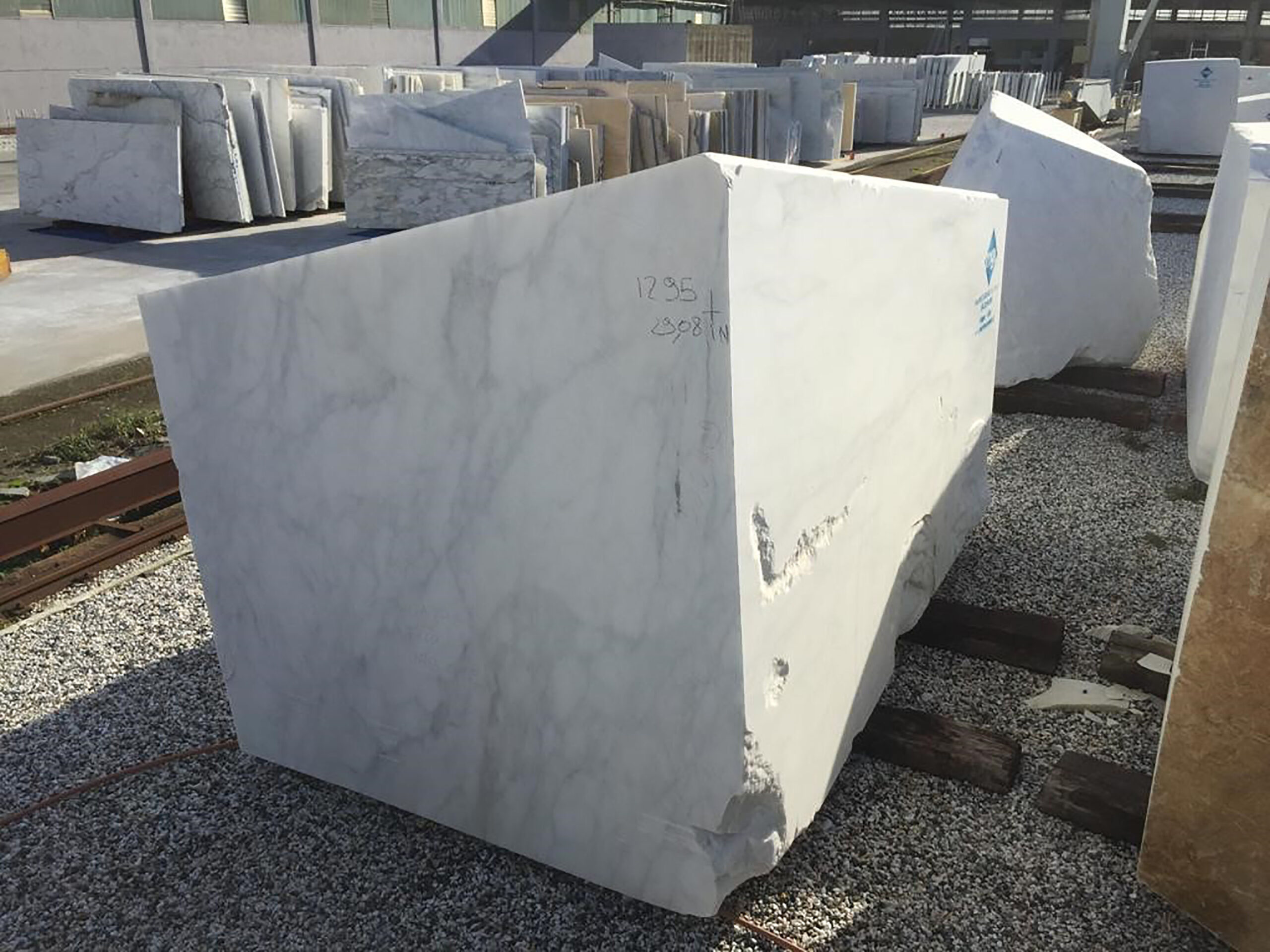 Calacatta Caldia is a very prestigious material, which is extracted in the MGI-owned Rocchetta quarry in the Apuan Alps, one of the most renowned marble sources in the world.

“There is something special about the Apuan Alps, the ‘moon mountains.’ In this area, the extraction of ornamental stones has a centuries-old history, with the production of a great variety of marble that is unmatched elsewhere,” said Nicoletta Caruso, COO of MGI. “Apuan Caldia stands out for its value and interest, a contemporary material of excellence in the range of ‘whites.’ It is extracted in the Rocchetta area, located about 10 kilometers from the town of Massa in the province of Massa Carrara, from which the quarry takes its name.”

Excavation—at almost 3,000 feet above sea level—evolves on three fronts, in an environment designed by the unprecedented vertical and horizontal geometries of the marble bench walls at the Rochetta quarry.

Although a honed finish was applied to the Calacatta Caldia panels used for the project, the material sparkles when the light hits it, especially in the lobby where daylight is abundant.

After a handful of trips to MGI’s facility in Italy, the Calacatta Caldia marble was carefully hand selected and purchased before being shipped back to the United States. “There was a total of five visits to the factory throughout this project to ensure quality and consistency in material,” Coyne said.

“Working with natural stone, especially with a material like this, you start to cut through a block, and as you go from one side to the other, you often get surprises,” Wright added. “You don’t know what it’s going to be until you cut it open, so we had to scramble a bit in order to select the right pieces for the right locations.”

Of the five visits made to MGI, the final visit was for a dry lay approval. The teams at Jantile and Perkins Eastman, as well as the client and its design team, were all present for the dry lay of the feature wall to ensure color consistency and veining. “We needed to make sure they were wrapping the corners that we wanted and that the whole thing felt balanced, with the grain running in consistent patterns,” Wright said. “They laid the two walls out on the floor next to each other and I got up on one of the lifts to look down and make sure everything was flowing properly.” 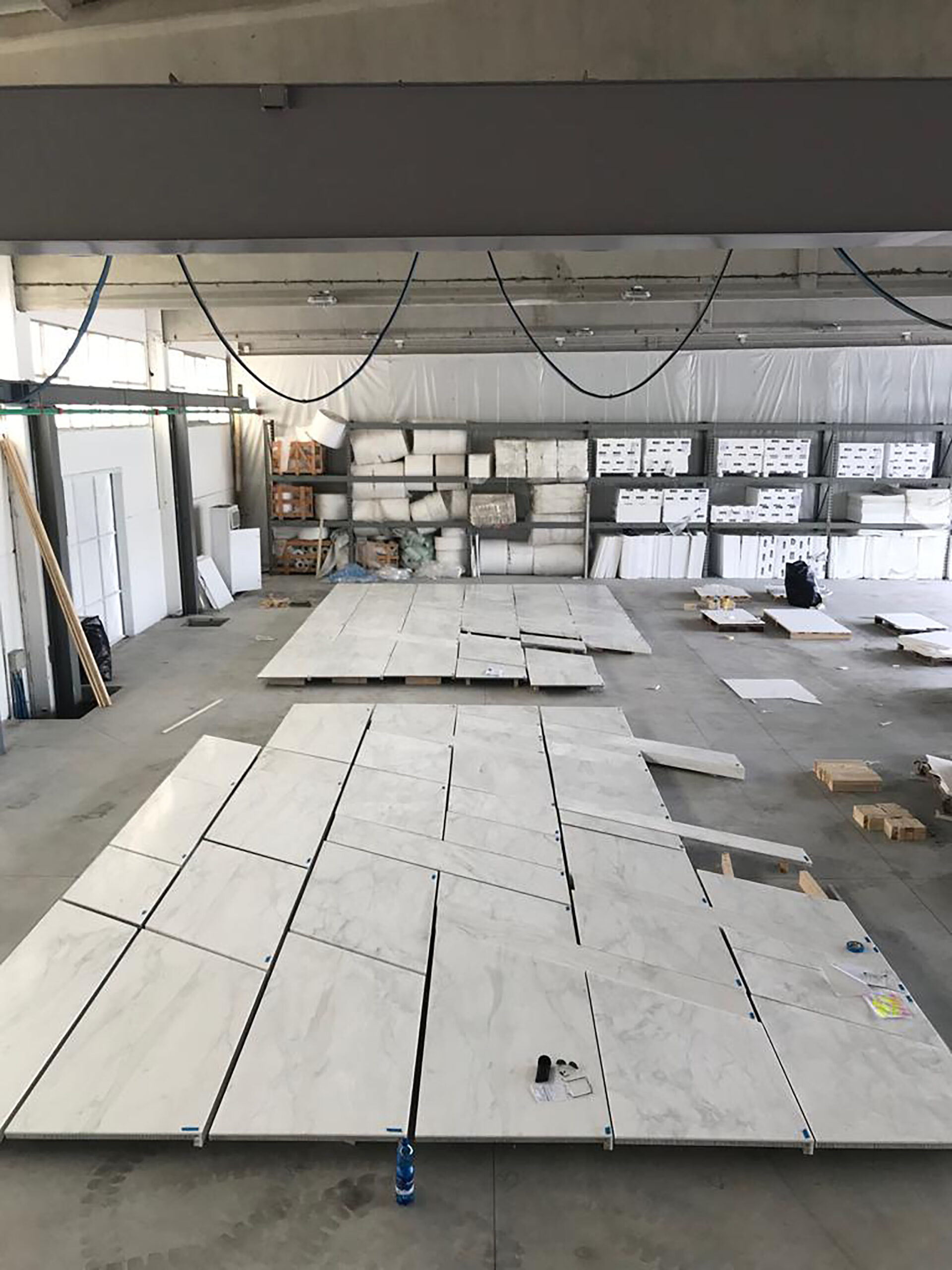 Since the feature wall is composed of 106 different-sized pieces, with no two panels measuring the same, Wright and his team devised a special numbering system for fabrication and installation. Perkins Eastman provided templates for use in laying out the stone on the actual slabs. “Everything was labeled, boxed, and shipped like a jigsaw puzzle,” Wright explained. “We developed a system where each of the pieces was numbered in rows. Then, working from one side and then around the corner on the other elevation as well. Each piece was unique. We developed the geometry then gave it to Jantile to complete the shop drawings and fabrication.”

Although Wright has completed similar wall designs for other projects, this was “unique in every way.” The owner had high expectations, and “we all wanted to assure that this came out as envisioned,” he said. “The hospital was very concerned about this wall, especially since a few pieces of the shipment included for the reception desk were broken and we had to scramble to reselect some pieces and recalibrate the overall composition.”

Once all pieces arrived in the United States, strategic fabrication and assembly were required to execute the feature wall as it was designed. “Putting together this wall, which is about 1,000 square feet of stone, wasn’t straightforward,” Wright said. “It took a lot of effort from a number of people all working together to get it right.”

Each panel had its own individual clipping system of varying lengths, which was integral to achieving the overall design. “The clips were all custom fabricated,” Wright said. “Each one had to be a precise size. Each piece of stone had at least two clips, some had more. You could imagine how difficult it was to put together.” 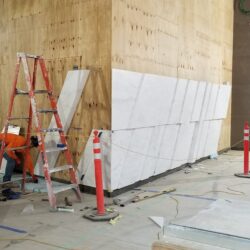 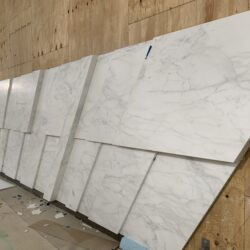 It was imperative every individual panel be placed in the precise location, according to Coyne. “In order to achieve the wall’s dimension, six custom J anchors were made in lengths varying from 1 to 6 inches to create the final ‘push/pull effect,’” she explained of the installation process, which allowed installers to hang the panels like picture frames. “A specific drawing was created to coordinate all anchor locations on both the substrate and the stone panels, guaranteeing all would align during the installation process.

“For the first course, the panels were either epoxied directly to the substrate or hung on one of the project’s shorter anchors,” Coyne shared. “The anchors in the second course were slightly longer than those used in the first course and the process continued up the wall. To alleviate the weight of the stone panels on the anchors, extra layers of plywood were added to the substrate for the third through sixth courses. This somewhat mirrored the ‘stepping’ effect seen in the stone and allowed the stone panel weight to be more evenly distributed across the wall.”

It took approximately eight months for complete fabrication of the feature wall, with an additional four weeks for drawing approvals and four weeks for onsite installation. “An initial crew of two was used to uncrate and lay out all materials. Once the team started installation and got into a rhythm, a second crew of two was added,” Coyne said. “The process was rather slow, as the panels fit like keys and required a specific order of installation. Each panel could only be installed after a specific panel before it. If one panel was installed even slightly out of place or out of level, it would have an impact on the panel that followed thereafter and thus impacting the entire wall.”

Coyne and Wright both agreed that the feature wall required extra thought and focus, as it was the most intricate aspect of the entire project. “All in all, I think it was a really good team effort from Jantile, the construction manager, the owner and their interiors department/design team,” Wright said. 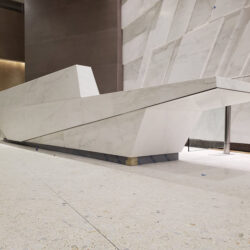 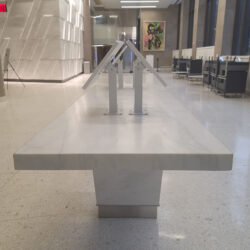 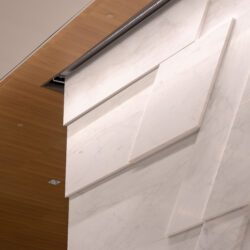 While the feature wall was completely fabricated in Italy, with onsite modifications in the United States, the marble slabs used for the reception desk, kiosks, credenza, café, and other elements throughout the hospital were shipped directly to Jantile’s facility in Armonk, New York, where they were fabricated and dry laid before being transported to the hospital for final finishes and installation.

“We also designed the adjacent café, which features the same Caldia marble on the counter, as well as a small area in the Cancer Center on the sixth floor,” Wright said. “There’s something really nice about looking at natural stone opposed to other materials. It feels nicer and has a high visual interest.”

With COVID-19 delays and other supply chain issues, the entire hospital took around 10 years to complete, with most of the hands-on work completed in the last five years. “I think the building fits into its neighborhood as well as any building of this size could,” Wright said. “The experience of coming into the lobby – a very calm space – really helps patients feel welcomed and appreciated. I think it’s an uplifting space without being overwhelming. The stone really helps to ground that feeling of being the center of the experience.” 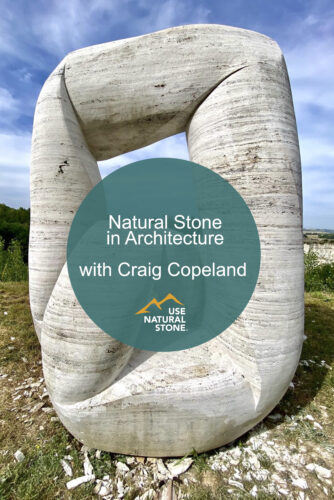 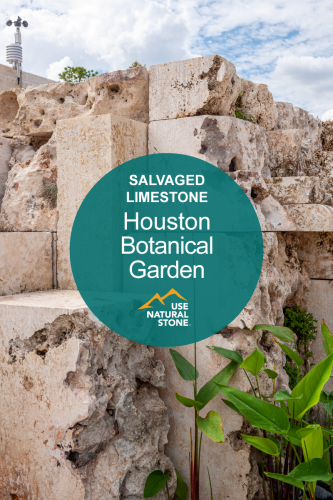 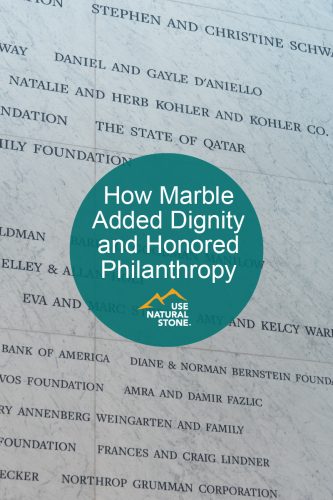