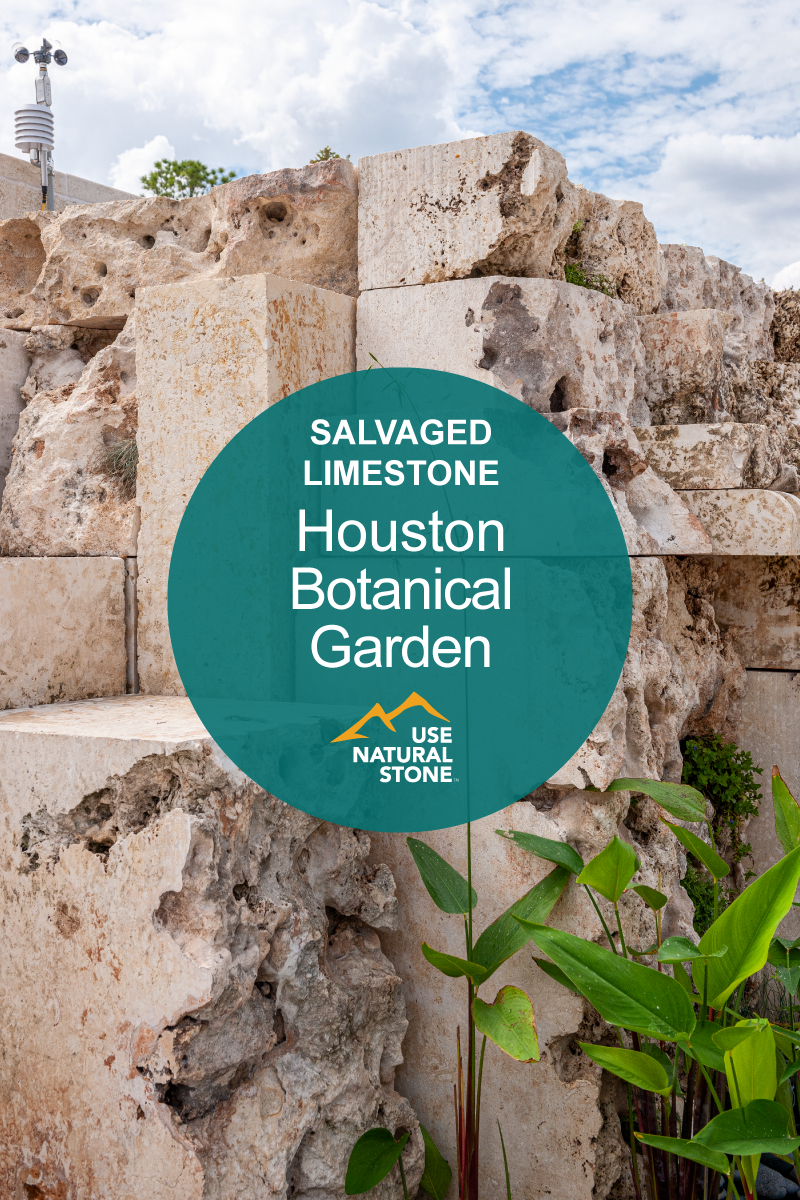 From Waste to Wonderful: Using Salvaged Limestone at the Houston Botanic Garden 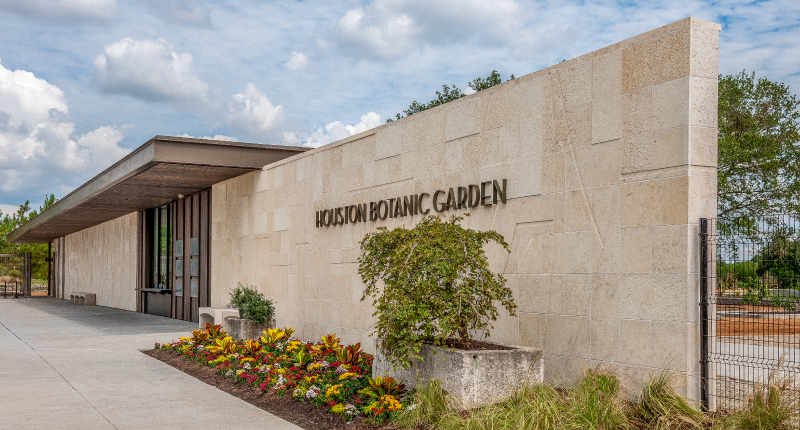 An earlier version of this article appeared in the Spring 2022 edition of Building Stone Magazine.

Cultural anthropologist Margaret Mead is credited for saying, “Never doubt that a small group of thoughtful, committed citizens can change the world; indeed, it’s the only thing that ever has.”

This sentiment rings true for Houston residents. Just over 20 years ago, a small group of Houstonians got together to discuss the idea of creating Houston’s first botanic garden. Today, locals and visitors can enjoy the fruits of that discussion. The Houston Botanic Garden opened its doors in September 2020, signaling the completion of the first phase of what will become a 132-acre design on an island in the city’s expansive Bayou system. 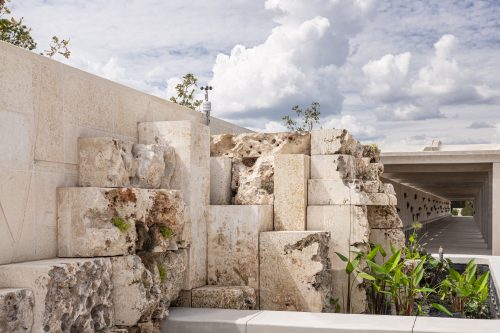 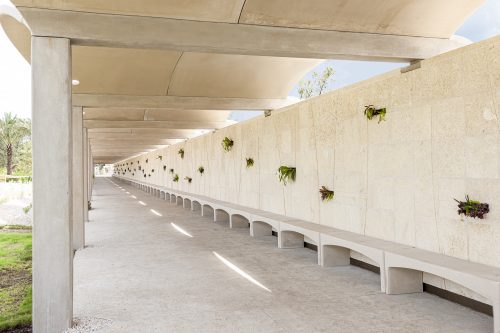 Guests strolling through the garden will see more than 3,000 growing species from all over the world. Many are plants that have never been seen in this area. They will also see a stunning feature wall and fountain created using unique natural stone, some of which was sustainably harvested from the Dominican Republic.

Natural stone played a major role in framing the garden, according to Donna Bridgeman Rossi, the project director at West 8, an urban planning and landscape architecture firm based in Rotterdam, Netherlands, with offices in the United States.

“When you look at the garden in the context of the overall island, it’s essentially plants within green space,” Rossi says. “We went with concrete, stone, metal, and ceramic to introduce a series of architectural interventions that would act as a backdrop to frame the garden and also give infrastructure and shade and introduce water.” Natural stone was included to give the overall design the bones that frame the collection and give it a sense of place.

Rossi often incorporates natural stone for her projects because of its inherently sustainable qualities. “Natural stone is such a noble material, and there’s a gravity to it that is immediately recognizable and universally appreciated by everyone,” she says. “It’s not a subjective mix material, it is good in its own state that we value. You don’t have to modify it in any way to make it do what it needs to do.”

In total, four areas feature natural stone during this initial phase of the Houston Botanic Garden project: the garden entrance, the pavilion, the alcove feature wall, and the fountain. As part of the innovative green wall design, plants grow in natural voids within the stone surface of the fountain or within pockets intentionally lined along a wall. 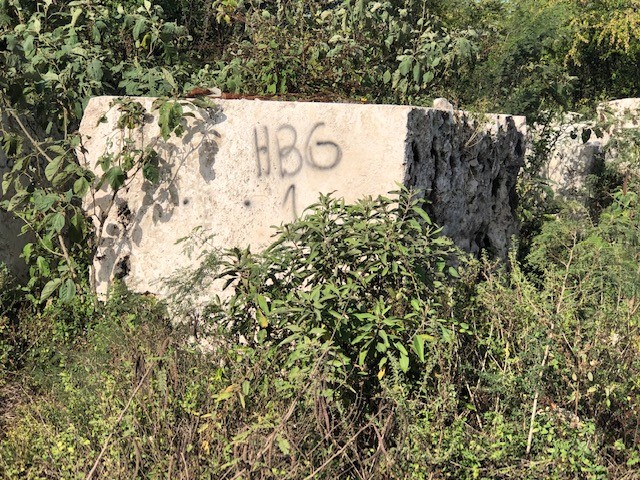 Finding those ideal stones meant Rossi and her team had to fly to the Dominican Republic with their mason and stone supplier. This is where they located Calypso Coral stone, a limestone with characteristically visible shells and sea fossils. They hand selected 64 Calypso Coral blocks for the green wall from the field that are often left as waste material and tagged each block based on their expressive characteristics. For example, Rossi says, some blocks had pockets or holes while others already had some kind of soil in it. These details, each unique to the 64 blocks, would prove to be critical for the overall design.

What is often considered waste material was part of the reason this stone was selected for the fountain. It was a sustainable choice, and the stone was already acting as a planter for plant collections in its natural state. “We thought it was an ideal candidate to work as a host for collections within the garden,” Rossi says.

“Essentially, the green wall blocks are from the upper crust of the quarry,” Rossi explains. Often, this stone is discarded as a waste material because it doesn’t have the consistent properties suitable for cladding as one would get from the lower tiers of the quarry. The upper crust is subjected to wind erosion, soil deposition, salt, and other conditions because it comes from an island climate. This is what gives the stone its unique finish and characteristics desired for this project. The fact that it came from a humid tropical climate similar to Houston’s also made it an ideal choice for both the fountain and feature wall. 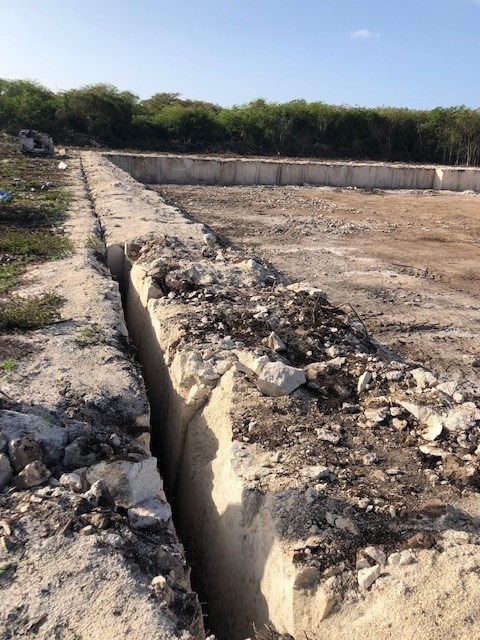 The Calypso Coral stone was quarried and fabricated in the Dominican Republic. The firm collaborated with Camarata Masonry Systems in Houston to develop the shop drawings and to supply and install the masonry units, stone cladding, and blocks at the feature wall and fountain.

Once the blocks were brought to Houston, each was hand placed on site with the crane operator to pick the best face where they could plant soil pockets. “We did little mesh bags that were embedded in the pockets and then we introduced irrigation,” Rossi says. Six carved Calypso Coral stone scuppers strategically positioned within the cubic green wall blocks serve as the waterspouts in the fountain. Holes were drilled through the suitable pockets after it was assembled.

To help the plants get the necessary water to keep them alive, an equipment room behind the blocks runs all the irrigation. “The irrigation head looks like an octopus,” Rossi adds. It has a branching system that threads through the blocks and includes a drip emitter. This system allows the garden horticultural staff to plant and curate an aquatic collection since the system is continually wet.

The team was drawn to the Calypso Coral stone because of its porous characteristics and the opportunity of using a waste material. That’s not to say Rossi wasn’t offered other suggestions like veneers or porcelains. “Throughout the project, people tried to talk us into porcelain at many intervals, like a stamped pattern of a piece of stone on porcelain,” she says. “We felt very firmly that we didn’t want to underestimate our audience. We felt they would know and appreciate a natural material in a natural setting.”

On the masonry side, two things presented unique challenges based on West 8’s unique design, according to Scott Slimp, vice president at Camarata Masonry Systems. “The first was the close coordination between the masonry wall with the planter box openings and the intricate recessed groove in the Calypso Coral stone cladding that tied in specifically with the planter box openings for the feature wall,” he says.

To support growing plant media along the stone wall cladding, 55 individual planter boxes were built into the wall and terracotta inserts in the back are connected to irrigation so horticulturalist and staff can pull them out on the backside and replant them.

Additionally, the alcove wall fountain was particularly challenging when it came to selecting and positioning of the stone blocks, according to Slimp. “The Calypso Coral stone chosen for the green wall is very unique in its appearance, which comes primarily from its location in the quarry,” he notes. “The upper most layer of material in the quarry, sits just inches from the surface of the ground. The proximity to the surface is what gives the material its characteristic sizable voids.” As mentioned earlier, those voids were critical to the design and function of the alcove wall fountain so getting them positioned correctly was important.

A project of this magnitude always runs the risk of things becoming complicated since several companies are involved.

For Rossi, the most challenging part of the project was the amount of teamwork and coordination that had to happen since several consultants and different systems had to come together. More important still, in an environment like Houston, you pretty much have to irrigate everything, she adds.

Rossi lists more than a dozen groups trying to come together for a shared vision and each has an important role to play, including multiple structural engineers, civil engineers, irrigation consultants, planting consultants, horticultural consultants, masons, stone supply, erection specialists, and contractors. 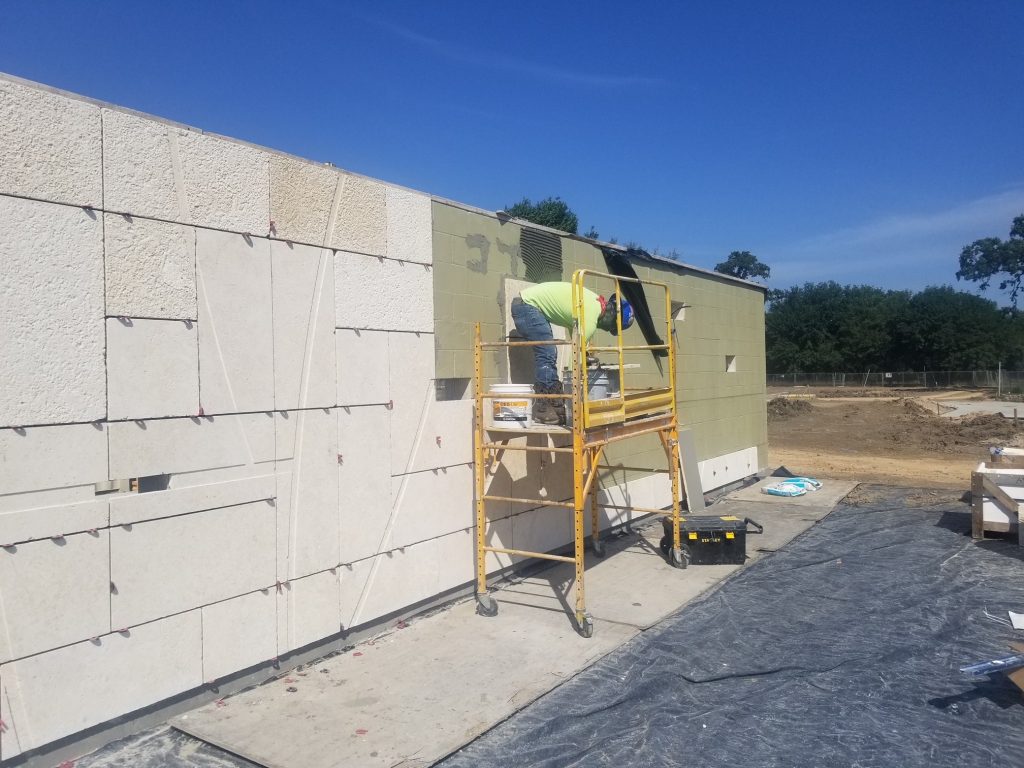 Sustainability is key to everything the botanic garden is doing, from what they’re growing to how the garden is designed. For West 8, that ethos goes beyond choosing natural stone that is normally cast aside as waste material. It applies to using professionals who have earned Natural Stone Institute Accreditation, having met or exceeded standards set by the international organization for best-in-class installation methods and a priority for safety. Working with accredited companies like Camarata Masonry Systems provides Rossi and her team a level of comfort they can in turn share with their client.

According to Slimp, what often goes unsaid or perhaps unnoticed, is the effort that goes into properly addressing key design features. For this project, the selection process of the green wall blocks and then the final positioning within the fountain to achieve the finished appearance that West 8 had in mind when they selected this one-of-a-kind material was notable. Secondly, the quality control and tight tolerances for the location of the planter boxes and the stone cladding were important and needed to be just right, according to Slimp.

Seeing the final product is always a joy and the project has been well-received by Houston residents and partners. Since the garden opened its doors during a global pandemic, Rossi feels the design has been warmly embraced as much as for its characteristics as it is for celebrating outdoor space safely. 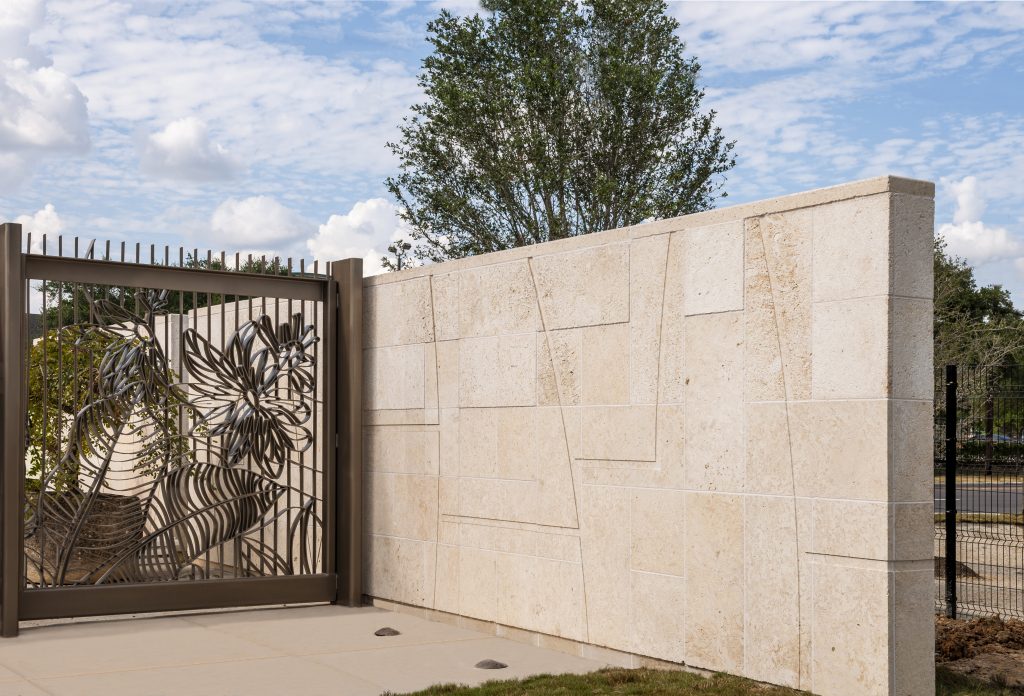 “It’s given people [in Houston] a new opportunity that they didn’t have before in challenging times, to be able to get outside and see things that they’ve never seen before. Although it’s in its infancy, it’s been welcomed,” she adds.

While some guests may not immediately notice or appreciate the amount of work done behind the scenes to bring a vision from 20 years ago to life today, many in the industry are taking notice.

In addition to earning a 2021 Pinnacle Award of Excellence from the Natural Stone Institute, Camarata Masonry Systems was awarded a Golden Trowel Award by the Texas Masonry Council. Slimp believes his company was recognized for its work as well as the unique design by West 8 in using the unique Calypso Coral stone. This distinction and recognition is important and appreciated by Slimp and his colleagues.

“The presentation of the project to your peers, designers and general contractors and then the further recognition by the same group for the exceptional execution of the work is always a win-win result that leaves you with a sense of pride for a job well done,” Slimp says. 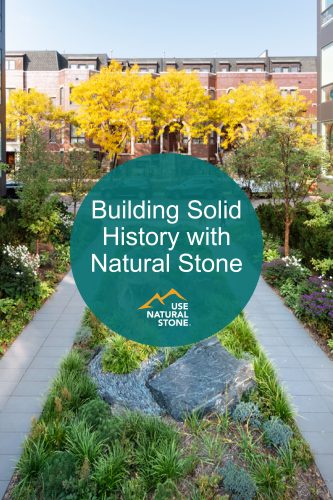 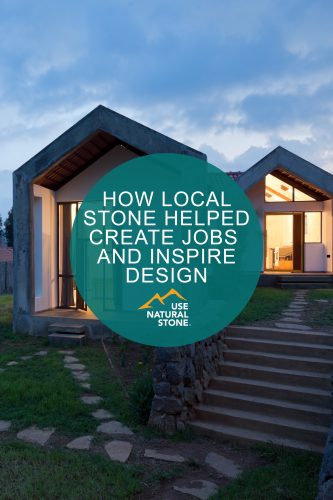 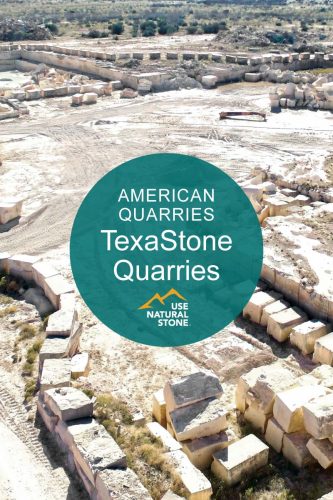