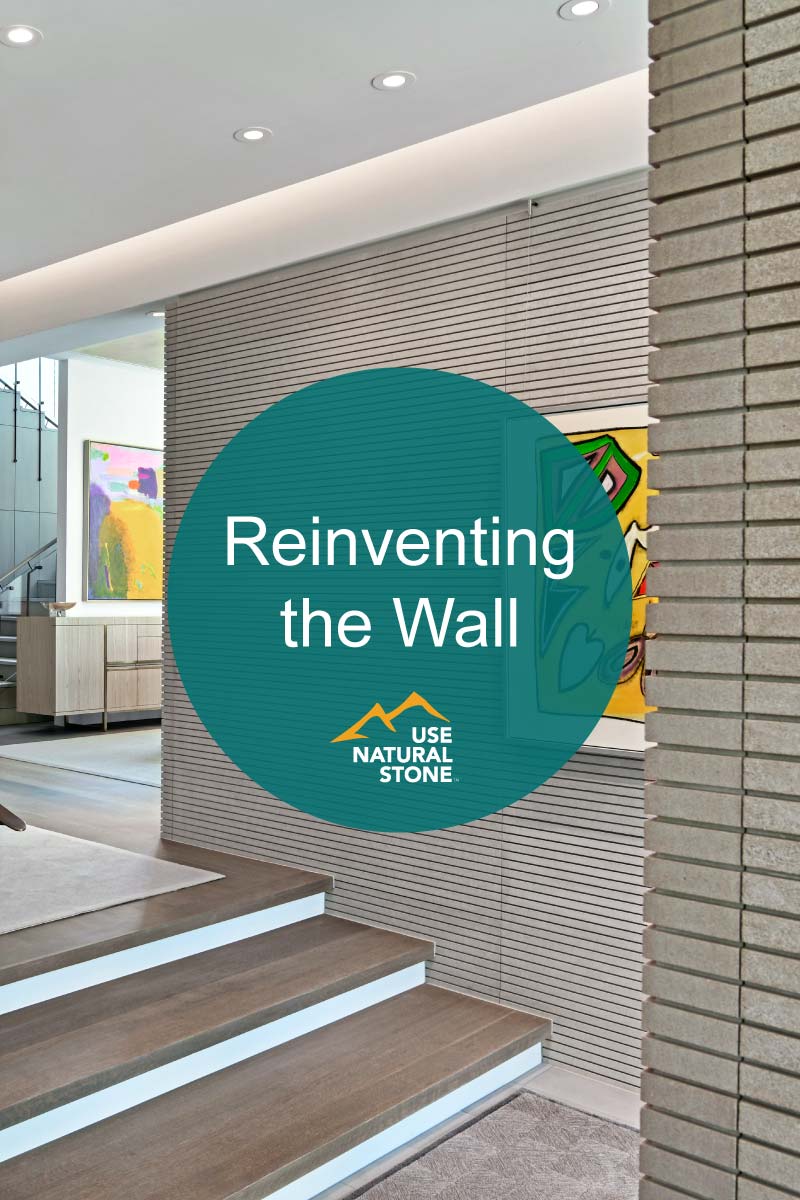 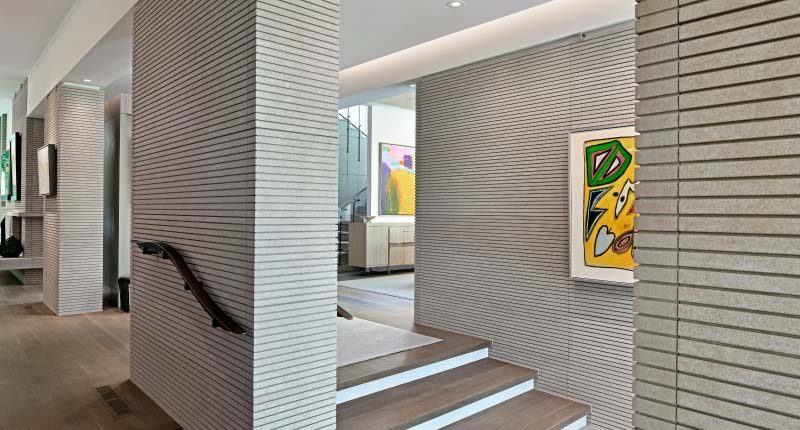 An earlier version of this article originally appeared in the Fall 2020 edition of Building Stone Magazine.

For the construction of a 7,400-square-foot home in Highland Park, Texas, a pair of homeowners opted for a modern architectural style using materials that would withstand the test of time. “The overarching concept was to achieve an expression of timelessness expressed in traditional materials used in a contemporary manner,” said Mark Domiteaux, partner at domiteaux architects in Dallas, who worked with David Cadwallader of Cadwallader Design in Dallas on the home’s design. 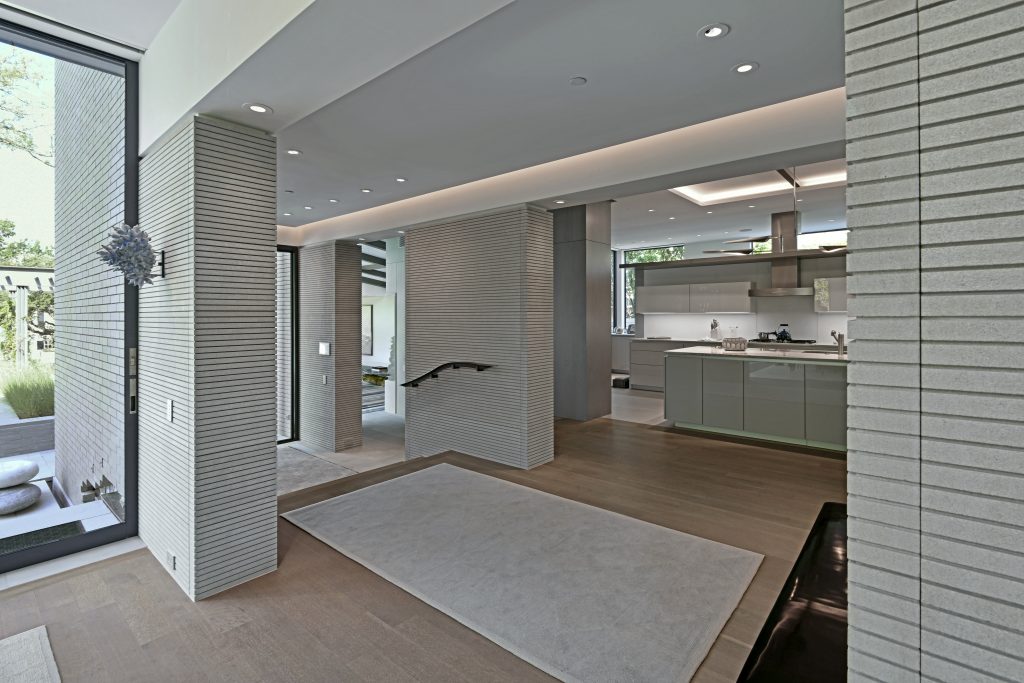 The initial work done on the limestone-clad walls did not meet expectations. This is when Dee Brown, Inc., a stone installer in Richardson, Texas, was contacted. “The most insurmountable issue appeared in the most critical area, being the entry wall cladding that we first attempted to fabricate using individual stone slabs,” Domiteaux explained. “Despite the best efforts, the design was not executable in a traditional stacked masonry configuration. We then turned to Dee Brown for their expertise. Through that collaboration, we all agreed that the only logical way forward was to fabricate precision-machined limestone wall panels.”

In late March 2018, David Unger, a 21-year Dee Brown veteran who currently serves as the Dallas plant manager, and foreman William Carter worked on the new design to completely revamp the look of the interior walls and provide the homeowner with what was originally envisioned. Robert Harris, a 23-year Dee Brown veteran who works in the special project division, was in charge of ordering the new stone from 3D Stone, Inc.

“The existing wall was cut limestone brick,” Carter said. “You had so many different colors—darker and lighter pieces—and it wasn’t uniform. They tried to miter the ends and patch the miters. It was essentially a brick layer doing a stone job. It wasn’t as uniform as the homeowners wanted. Dave Unger did most of the designing. He was the brains of the operation.”

“There was a lot of chippage,” said Unger, who was named the 2017 Natural Stone Craftsman of the Year by the Natural Stone Institute. “We determined it wasn’t going to have the appearance they wanted. There was literally no variation in a 60-foot-long wall.”

Indiana buff limestone in the select grade was specified for the new wall design. The color varies from a light cream shade to a brownish buff, while the “Select” grade refers to the fine-to average-grained stone having a controlled minimum of “other natural characteristics” and veining. Other natural characteristics include a few distinguishable calcite streaks or spots, fossils, pit holes, open texture streaks, honeycomb formations, iron spots, travertine-like designs, and grain changes, according to 3D Stone.

“We supplied Dee Brown with 35 pieces for a total of 274 cubic feet for this project,” said Logan Sylvester, sales, shipping, and estimating manager at 3D Stone. “Dee Brown then cut the panels to fit for an interior veneer in the main entryway.” 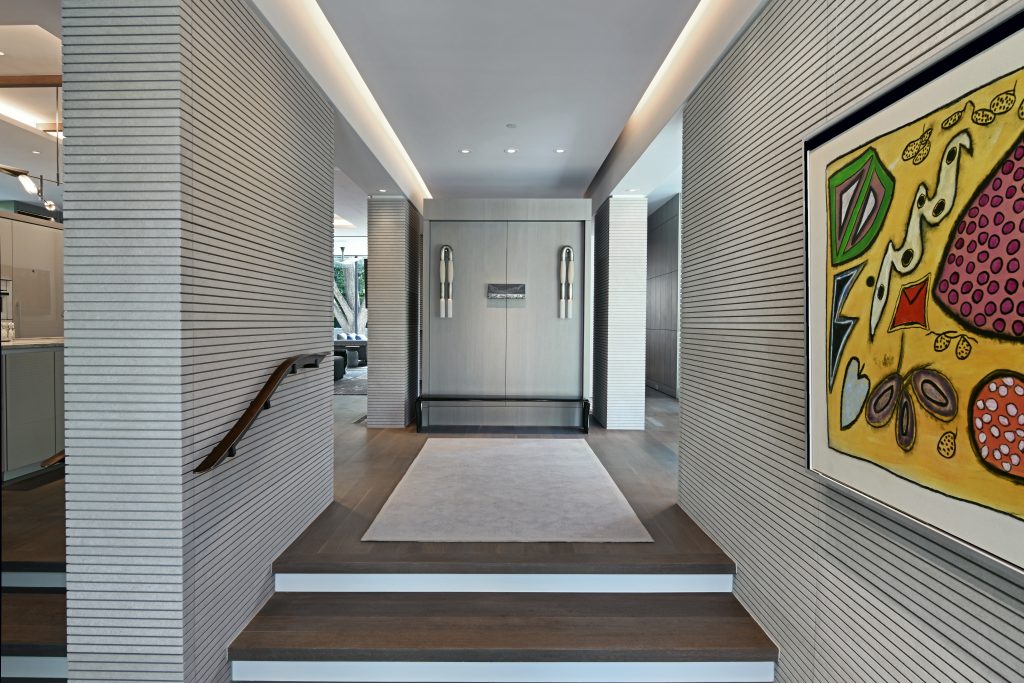 The limestone was fabricated with unique, continuous horizontal grooves for all of the walls. “All stone options were considered before reaching a consensus on using Indiana limestone,” Domiteaux said. “The coloration, density, durability, and workability inherent to this limestone outweighed all other stone material choices.”

Harris ordered the material to Dee Brown’s Dallas facility, where special care was taken during the fabrication process to hold tight tolerances to the horizontal grooves, as well as the typical cut-to-size aspects. “Dave designed the stone to where we could make the joints disappear and lined everything up where it looked more like a solid slab,” Carter said.

“The pieces we used have between eight and ten courses of the stone in a single block of the stone,” Unger said. “It was basically like watch work. There was also some handwork to touch it up. We do a lot of work that is very finicky and meticulous. I let the guys know there was a zero tolerance and it worked very well. We have a good crew.”

While Unger devised the design, Carter was in charge of assembling the crew to complete the installation, which included himself, Unger, and one of their best installers, Pablo Lopez. “He’s a craftsman. We get compliments on every job he does,” Carter said. “He, Dave, and I went over there on June 6, 2018, and started laying walls out and coursing it up. At first, it hit the ceiling, but we figured it out.”

“The ceiling was a little bit out of level, so we had to adjust the joints a couple of feet down the walls,” Unger said.

Domiteaux designed the cladding system that was used to adhere the limestone panels to the walls, according to Carter. “It was 4-inch-thick limestone and we put false joints in it,” he said. 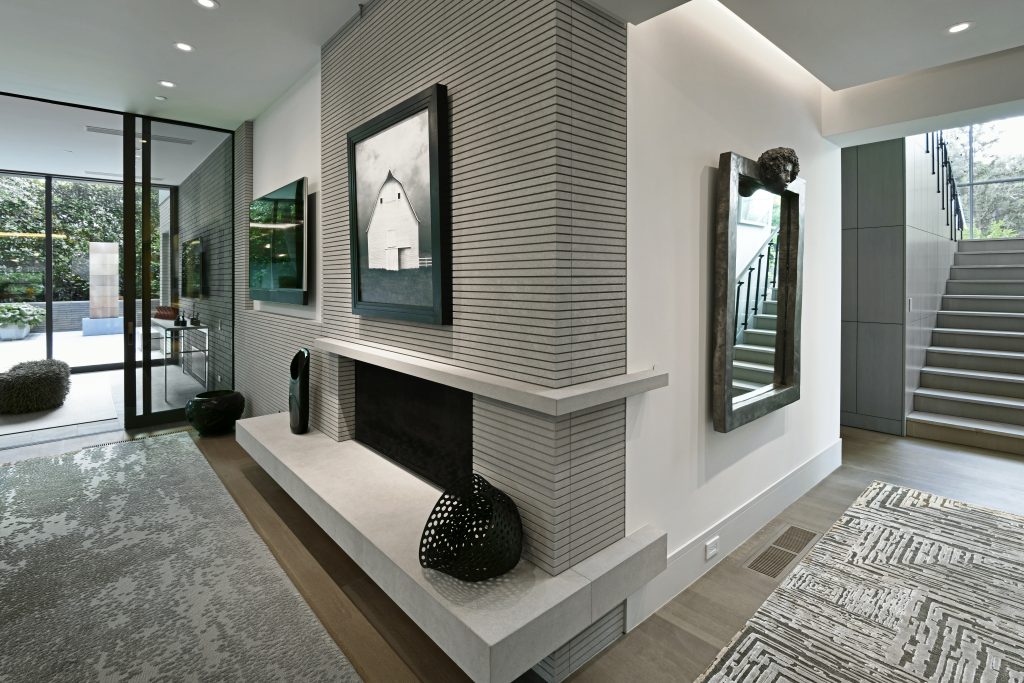 Domiteaux was also onsite throughout the duration of the stone installation to ensure everything went according to plan, coordinating with the fabricators constantly. “The focus was uniformity of stone coloration, perfection of the machined panels without chipping and damage, alignment and spacing of joints, coloration of the grout utilized and protective sealing of the surfaces without changing the coloration,” he said.

Since the walls were prefabricated at Dee Brown’s shop, the installation team had to carefully transport the material into the home once it arrived onsite. “Getting the slabs up the house was interesting,” Carter said. “We had steps to go up on the exterior, so they put together a trolley system. We also used a pump jack to set the stone. It was quite an operation.”

In addition to designing the walls, Unger was also tasked with creating special stone finishes in the half-bath using a $10,000 slab of 3-cm-thick natural white quartz, a semi-precious stone from Madagascar, which was supplied by The Stone Collection in Dallas. “The slab was transformed into a lavatory top/bowl assembly, water closet wall cladding, and even tissue and towel holders,” Unger said. “We created a stone look that looks like velvet.” 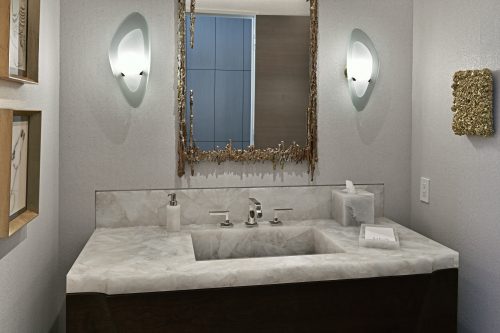 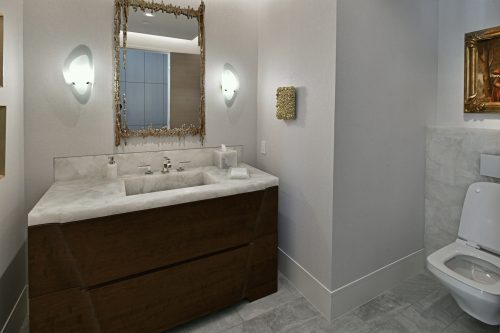 The installation was completed in around five months. “Ripping down the old work was a challenge in itself because everything was finished inside of the house when we got there,” Carter said. “The guys did such a good job covering stuff up and making sure everything was good. The superintendent, Gabe [from BufordHawthorne Builders], made it easier for us. It’s always good to have a good general contractor.”

Since the home’s completion in late 2018, it has received a 2019 Pinnacle Award of Excellence in the Residential Single Family category from the Natural Stone Institute and has been well-received by the homeowners and their visitors.

“The level of detailing, craftsmanship, and design achieved is a constant source of amazement and appreciation by those experiencing this home for the first time,” Domiteaux said. 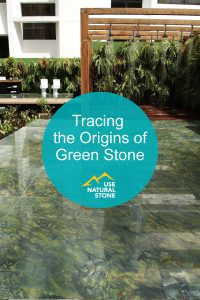 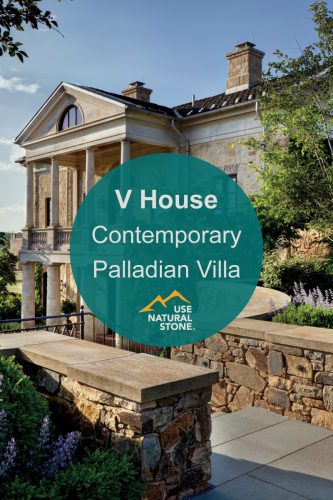 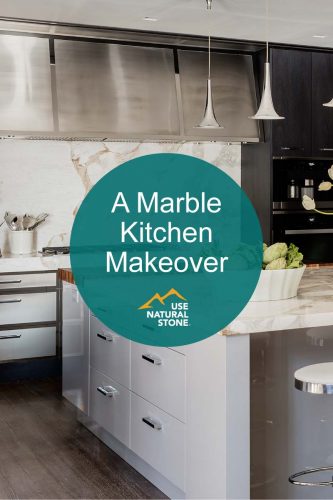