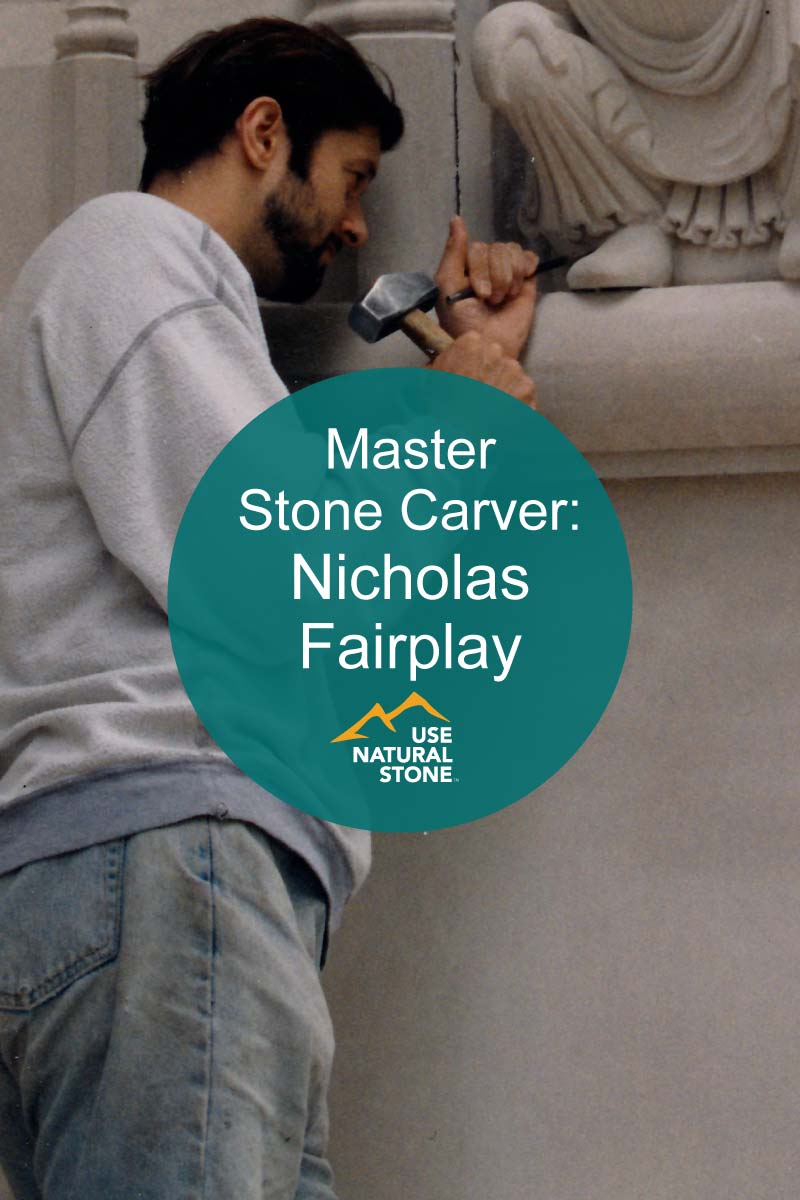 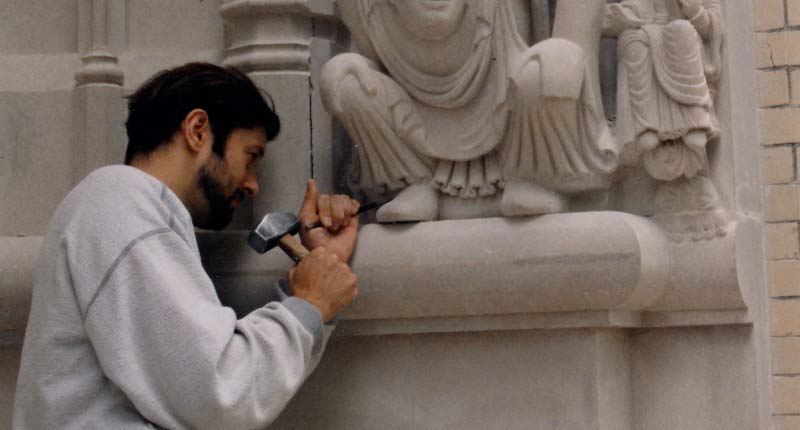 All photos courtesy of Nicholas Fairplay.

It’s not every day a sculptor gets to carve one Romanesque statue as part of a project. Nicholas Fairplay had the opportunity to carve two using Indiana limestone that are now on permanent display as part of the College of Fine Arts building at Carnegie Mellon University in Pittsburgh.

Fairplay is an artist and his medium is natural stone. He works with stones such as marble, limestone, and sandstone. While his studio is currently based just outside Cleveland, Ohio, his training began in Europe, where he specialized in hand-carved stone, marble sculpture, and ornaments. 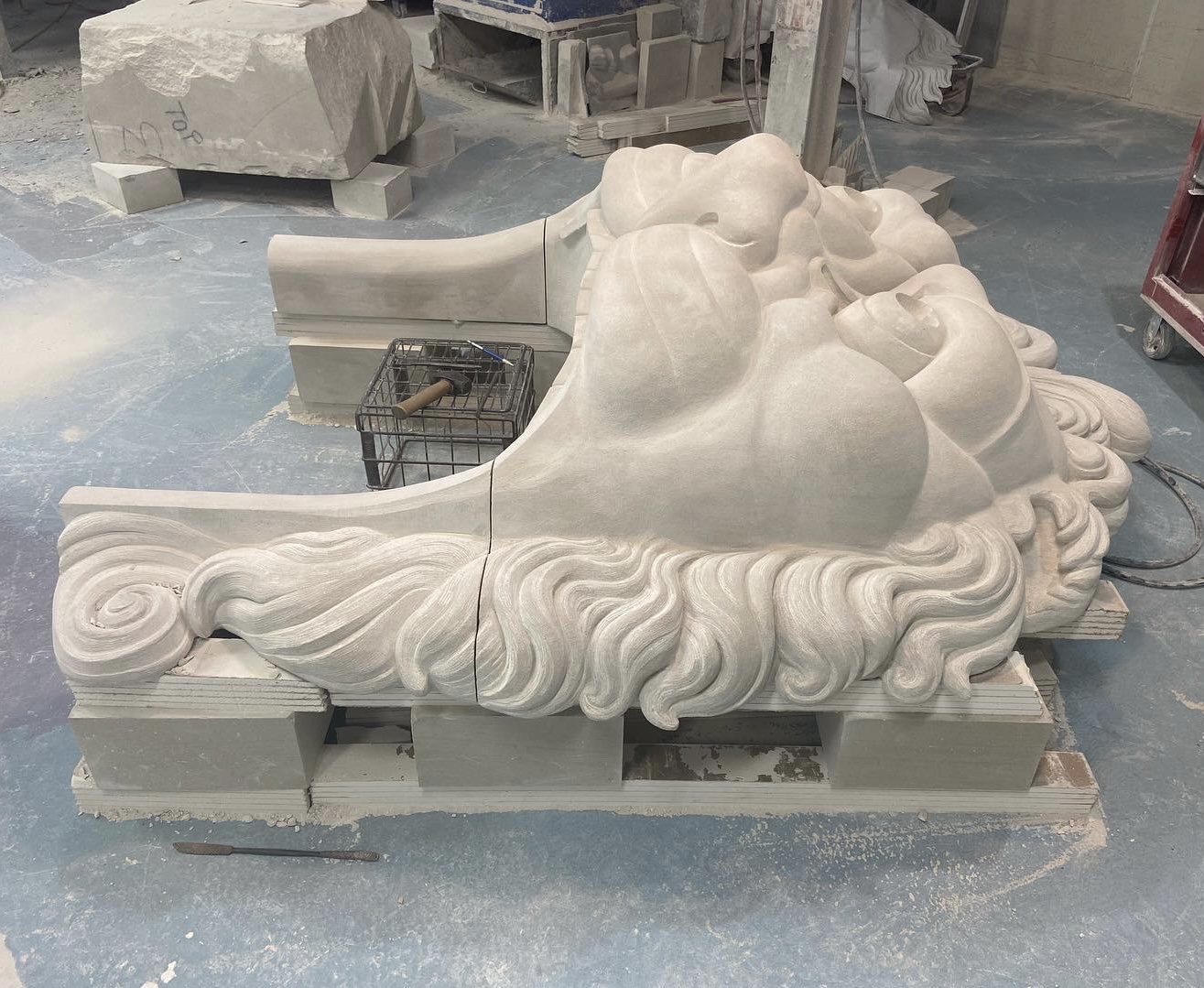 Fascinated by the large cathedrals throughout Europe, Fairplay visited one after high school and asked for a job. While they couldn’t hire him at first, he offered to work for free for six months. They brought him on staff and he showed up and soaked up everything he could. It was during that time he fell in love with sculpting and working with natural stone. “When I started carving natural stone, I just loved it,” he says. “I love that it’s three-dimensional.” At the end of his free training, the cathedral hired him.

When he arrived stateside, he wasted no time contributing to American buildings, including St. John the Divine in New York City, the Utah State Capitol in Salt Lake City and the five intricately designed niches at Carnegie Mellon University. Of the six niches created when the building was built in the early 1900s, only one was completed. The other five, according to Fairplay, were left unfinished and each niche was to be carved in a different architectural genre.

“It was a very difficult job because all the stone was on the wall,” Fairplay says. He and his team had to slowly cut part of the stone off the wall and work on it on a bench. While removing it, they needed to careful not to damage the work next to it. Other details were done while the stone was still on the wall. “It was like you find yourself carving upside down a little bit. It’s a little bit awkward.” 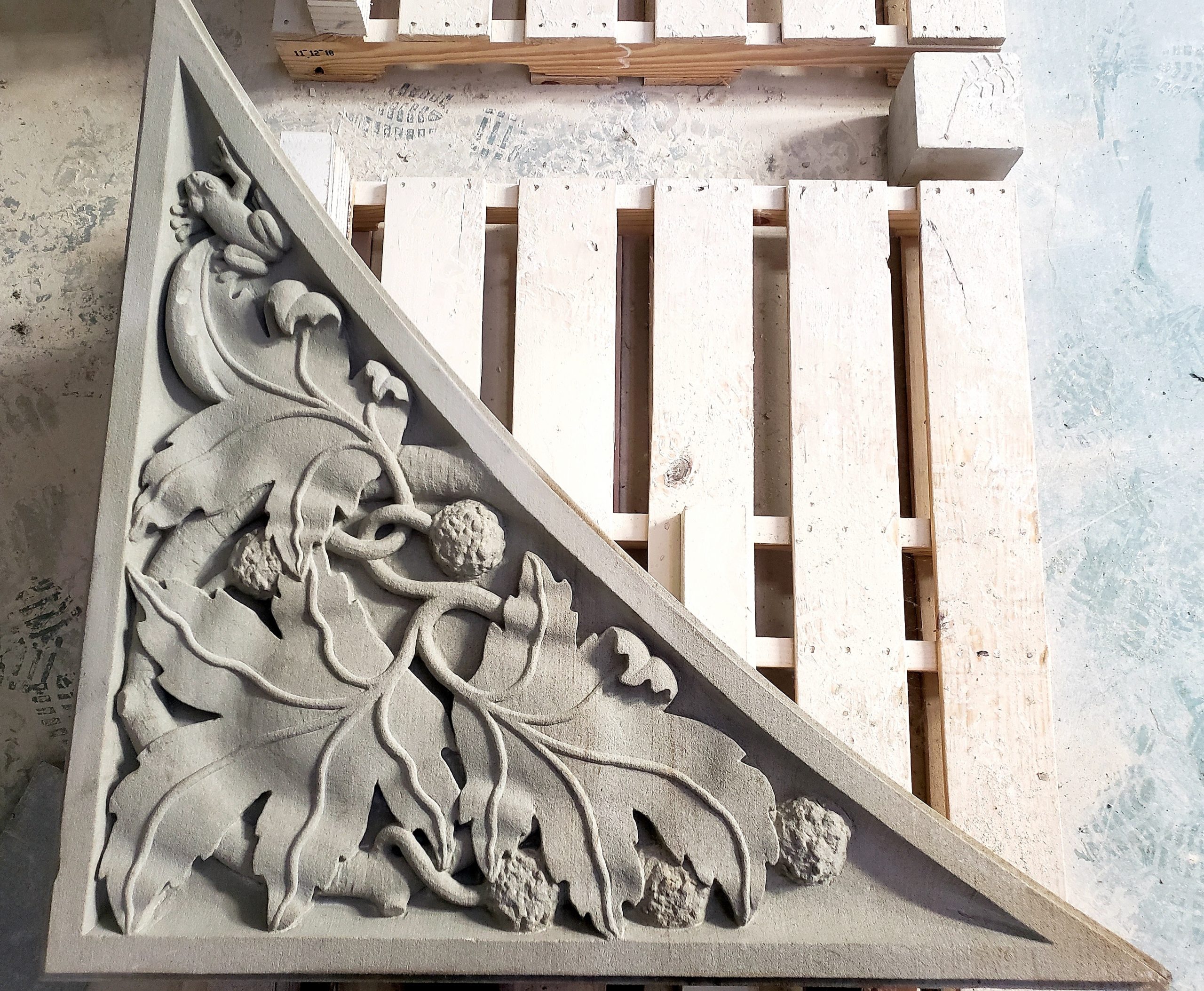 He researched the niches and statue designs since every detail had to be plotted and sketched out in advance. To create the Romanesque statues, he cut the blocks and kept those on the ground so he could carve them before placing them in the niche.

While carving Romanesque statues isn’t a project that comes across his studio often, Fairplay says this specialized training and artistry is sought out among homeowners, designers, and architects, especially when it comes to restoration projects or those who want truly one-of-a-kind pieces in their homes.

In cases when the client only has a general ideal of what they’re seeking, Fairplay goes one step further and creates pieces of art, carving leaves, snails, or lion heads.

When Fairplay was asked to add some carvings of sycamore leaves as part of the entrance of a gothic style home in Cleveland, Ohio, he knew the client was expecting cookie cutter cut outs and the same style throughout. He decided to carve each of them differently to give them character.

For example, he added a little curling on some of the sycamore leaves and on a few of them he included an “odd little animal,” he says. “In the spandrel, or the triangular piece on an arch, there are three leaves and a little frog,” he shares.

One piece features a cicada on one of the sycamore leaves. Another has a lizard running. According to Fairplay, you’re not meant to sit and stare at the carvings but rather to appreciate those little details when you come upon them. He wasn’t paid extra to include those details but as an artist with some artistic liberty on a project, he loves adding them because that’s what people notice, he says. 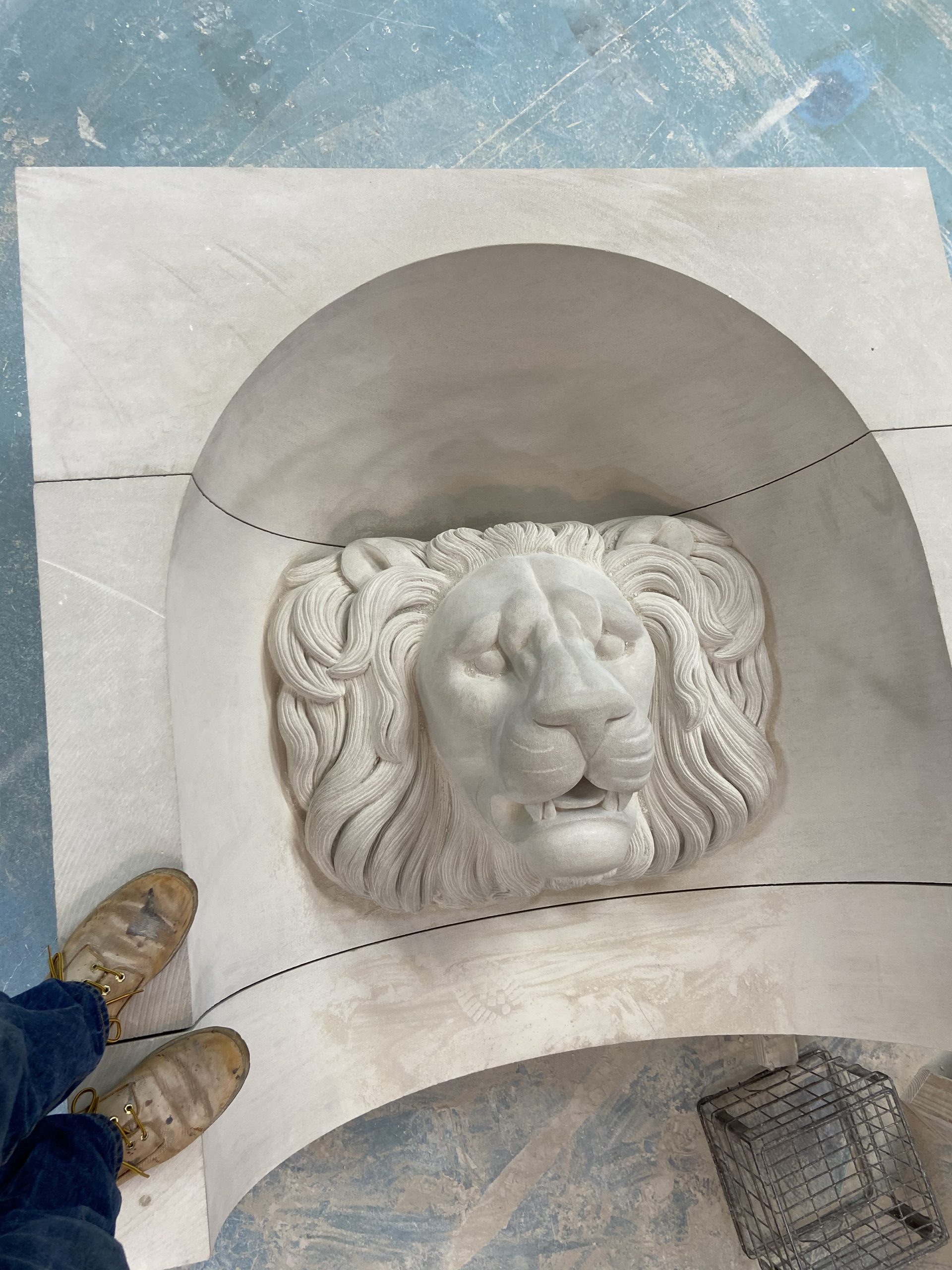 “It’s a little detail and you don’t want it to be too dominant,” he adds. “You want it to be just here and there. And that way, it’s more. It’s not in your face.”

Fairplay appreciates being brought into a project, whether it’s through an architect or residential homeowner, and having an opportunity to bring his artistic skills to the table. Recently he’s been commissioned to create large scale stone fireplaces for homes. Some feature details like a lion face (designed so the fire would be in the mouth area) while others are more subtle.  The artistry cannot be underestimated.

The fireplace featuring the lion face was smaller than other fireplaces he’s been designing as of late but even that was six feet tall by five feet wide. He’s currently working on five fireplaces in his studio, some in a gothic style, one provincial French and an elaborate Italian one in marble featuring a Cupid angel holding a shield. 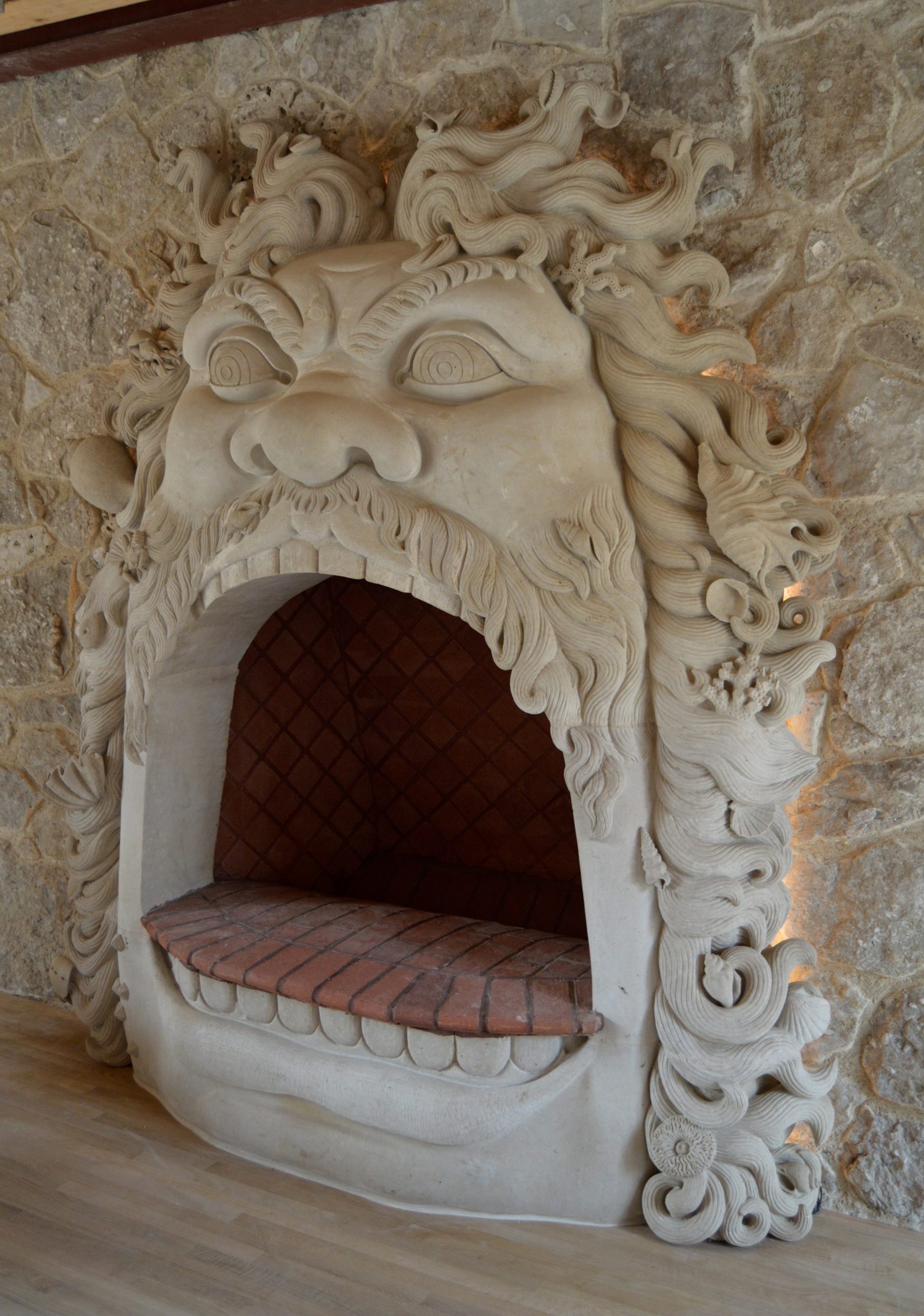 Whether it’s a classic design or part of modern architecture, Fairplay believes that sometimes less is more. You don’t need carvings to appear throughout a building to appreciate the artistry. “I’m not for seeing carvings on every inch of the building,” Fairplay says. A little foliage or detail or ornament can go a long way.

“Some buildings need something like that to sort of enhance and be in balance with the building,” he notes. “To have a sort of small area with some ornament. If you think of art deco, the ornament is very limited and it can actually be very stylized too. But it can be fantastic.” 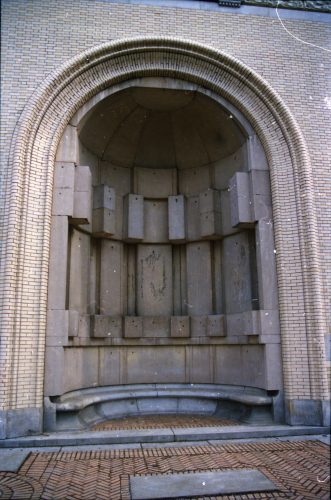 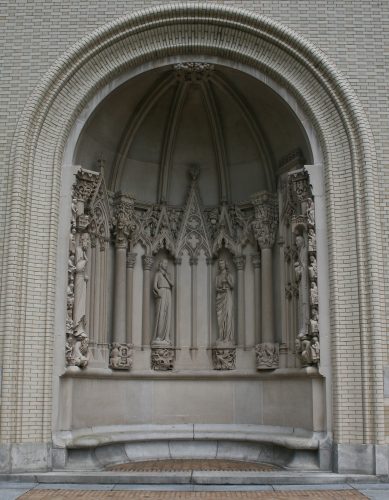 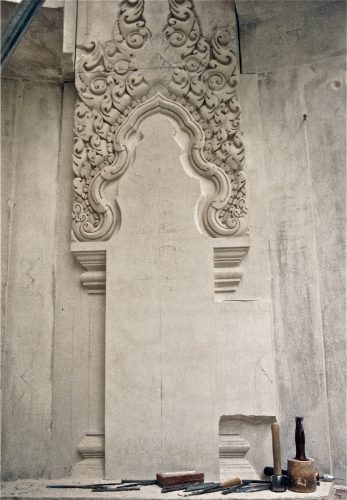 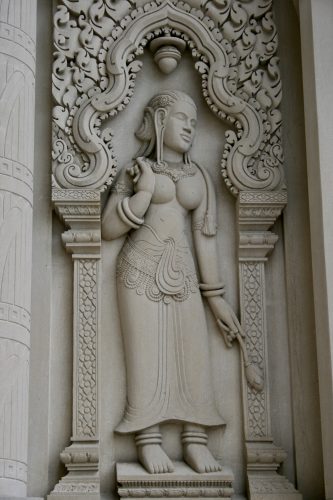 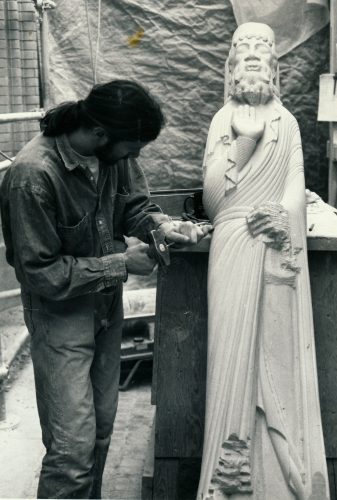 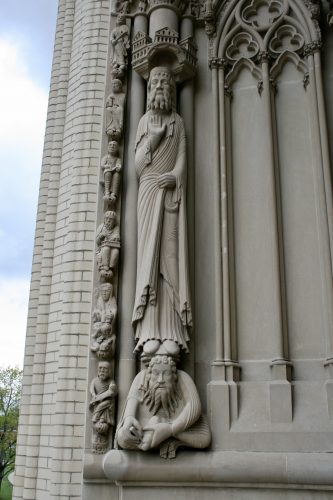 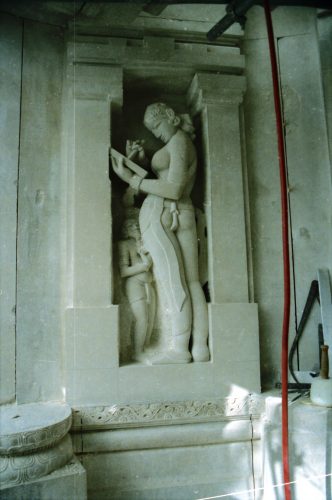 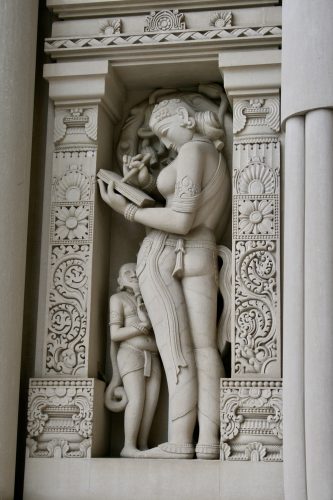 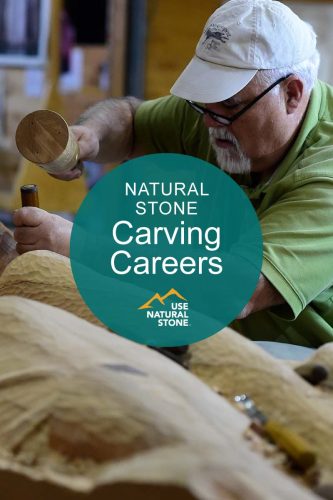 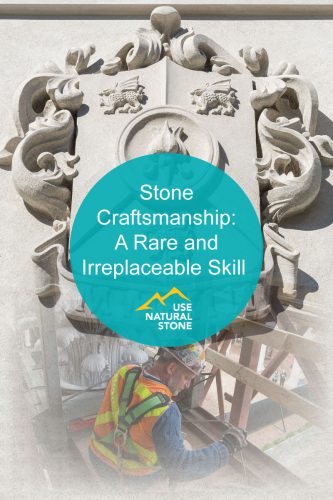 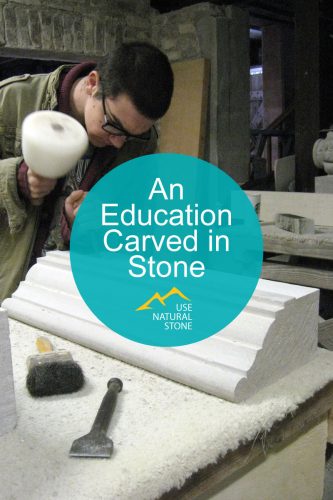