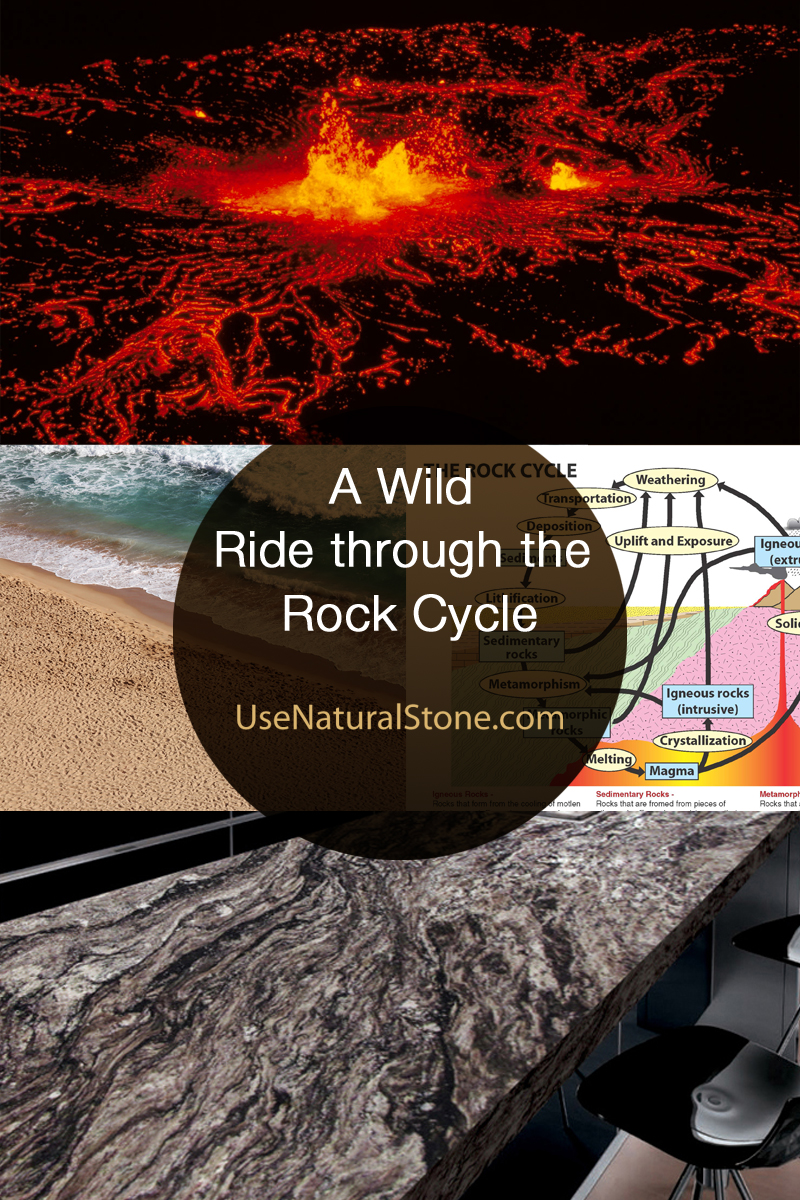 A Wild Ride through the Rock Cycle 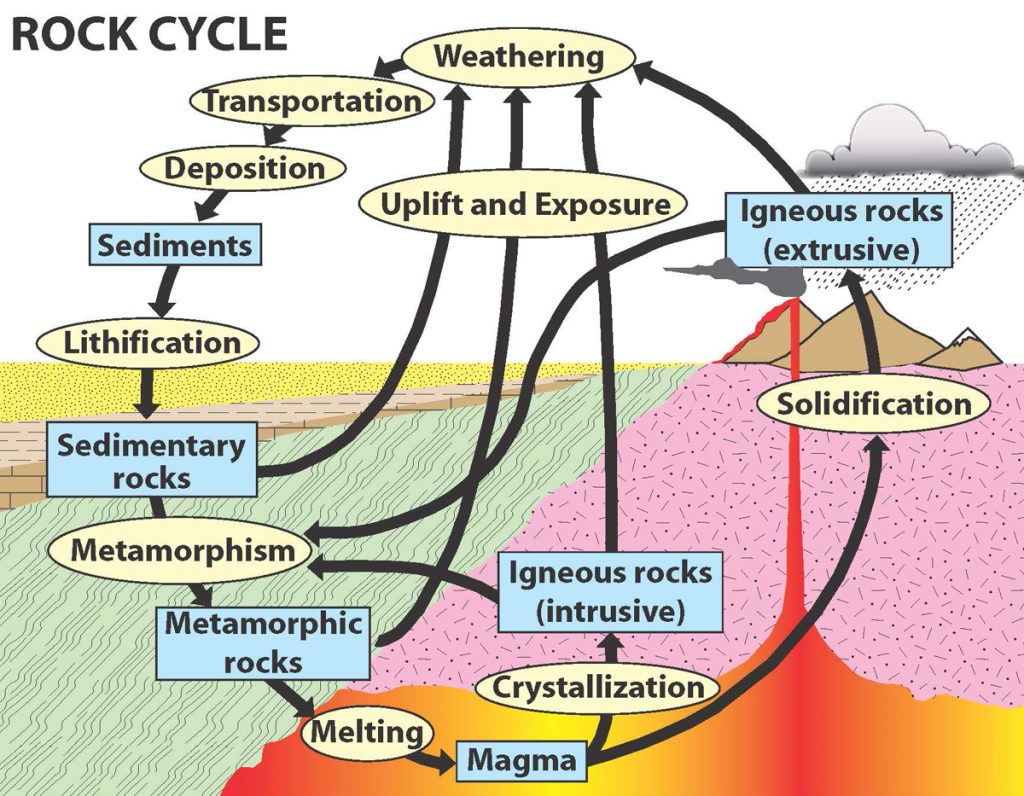 How Stone Is Formed | The Rock Cycle Explained 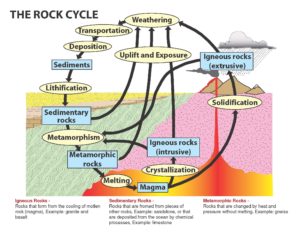 The rock cycle. Photo courtesy of the South Carolina Department of Natural Resources.

The forces that create natural stone are all around us. Some are right in our backyards and others operate miles deep inside the Earth. Geologists use the concept of the rock cycle to illustrate how rocks are born, and then are transformed by their journeys through the Earth, only to be recycled into new rocks all over again. Along the way, we get some amazing specimens of stone to enjoy, each one revealing telltale signs of its geologic past.

Molten rock resides in pockets in the Earth’s crust. In some cases it’s not even all that deep, such as in Yellowstone National Park where magma lurks just a few miles underfoot. Rocks borne from liquid magma are called igneous rocks, and they include favorites such as St. Cecilia, Ubatuba, and Blue Pearl. 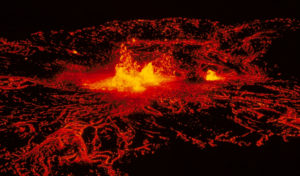 Igneous rocks come from liquid magma, like this lava in Hawaii. Photo courtesy of the National Park Service.

Magma underground isn’t fully liquid; it’s more like a slushy mixture of liquid and solid. As the magma cools, mineral crystals form. Magma that cools slowly gives us large crystals like Bianco Sardo or Rosa Porrino. When it cools more quickly, it will have smaller grains, like Absolute Black. If water mixes in with the magma, you can get giant crystals, called pegmatites (like Alaska White). In all of these cases, the rock cools off while still underground, a process that can take thousands of years. Sometimes magma erupts out onto Earth’s surface in a lava flow or in a fiery cascade of airborne cinders. Lava rocks rarely make good structural or countertop stone because they tend to be porous and fragile. These specimens can add interest to your rock garden though.

Igneous rocks vary in color depending on the minerals in them. They range from light-colored granite (like Butterfly Beige) to black basalt (like Premium Black). Geologists have an organized naming classification for all kinds of igneous rocks, but in the decorative stone industry they are often all categorized as granite. This makes some geologists crazy, but as long as we understand our different languages, it’s okay!

Despite their range of colors and textures, most igneous rocks share similar properties. They are hard, dense, and they don’t etch when exposed to household acids. That’s why they are an enduring choice for countertops and floors. 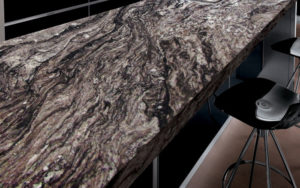 Rocky Mountain gneiss shows the taffy-like pattern that formed when the rock was heated and compressed. Photo courtesy of Pacific Shore Stones.

Broken rocks are the ingredients for a new kind of stone

We know that igneous rocks form a few miles down in Earth’s crust. Thanks to tectonic activity, rocks that form way down deep can be brought up to the surface where we can admire them and learn about where they’ve been. For example, most mountain ranges are made of once-deep rocks that have been forced upward. As magnificent as mountains are, they don’t stick around forever. Their rocks get weathered, broken apart, and carried away by erosion. This is how sedimentary rocks form. Loose sediments roll down a mountainside, blow away in a dust cloud, or are swept downstream in a river. At some point, pieces pile up and become the ingredients for a sedimentary rock. With added layers on top of them, they’ll compress into solid stone once again. In this manner, cobbles and gravel became conglomerate, such as Green Marinace. Coastal currents formed the swooping layers in Wild Sea, and tidal flats created the intricate patterns in Palomino.

Because these rocks form at or near the surface of the earth, they are not exposed to high pressure. The more deeply a rock is buried, the denser it becomes. Sedimentary rocks like sandstone can make exquisite stones for both structural and decorative purposes, but they can be porous – make sure the properties of the rock match the intended use. 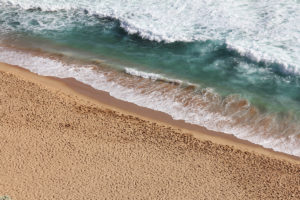 Beach sand may have once been granite, and now it’s on its way to becoming sandstone.

Heat and pressure transform rocks into new versions of themselves

The sandstone on our beach got to enjoy the sunshine for only a little while before layers of new sediment washed in on top of it. With each blanket of new material, the sandstone finds itself deeper, hotter, and under more pressure. To make matters worse, a pocket of magma gurgles up from below, and the whole area gets compressed and squeezed. As a final insult, hot, briny groundwater circulates all around, transforming this once pleasant environment to a Hadean torture chamber. These changes in heat, pressure, and chemistry make the rock change too.

Metamorphic rocks are those that are subjected to conditions that cause the rock to change. Sometimes new minerals form. Sometimes the minerals rearrange themselves in a linear or wavy pattern. The type of metamorphic rock that emerges depends on what the rock started out as, and what conditions it endured.

Our beach sandstone, when heated and compressed, turns into quartzite (like Sea Pearl). The sand grains don’t melt, but they become fused to their neighbors. This is why quartzite is less porous than sandstone.

If granite is heated and compressed, the resulting rock is called gneiss (pronounced “nice”). Gneiss has wavy, ribbon-like patterns in it, which are formed as the rock is squeezed. Rocky Mountain and Juparana are beautiful examples of gneiss. Some metamorphic rocks develop glittery mica minerals (like Cosmos) and are called schist.

In extreme conditions the rock may start to melt and turn back to magma. Stones like Titanium show the beginnings of this process, with fluid bands of melted quartz in an otherwise solid rock. This is called migmatite, which means “mixed rock” – part igneous, part metamorphic. If we keep dialing up the thermostat on our rock eventually it will melt completely and become liquid magma once again. The cycle begins anew.

Through these processes, hundreds of different rocks form on Earth, ranging in ages from billions of years old right up to rocks that are forming today. A kitchen countertop, a tiled floor, or a dry stacked stone wall are perfect ways to capture these geologic events to admire as part of your everyday life.