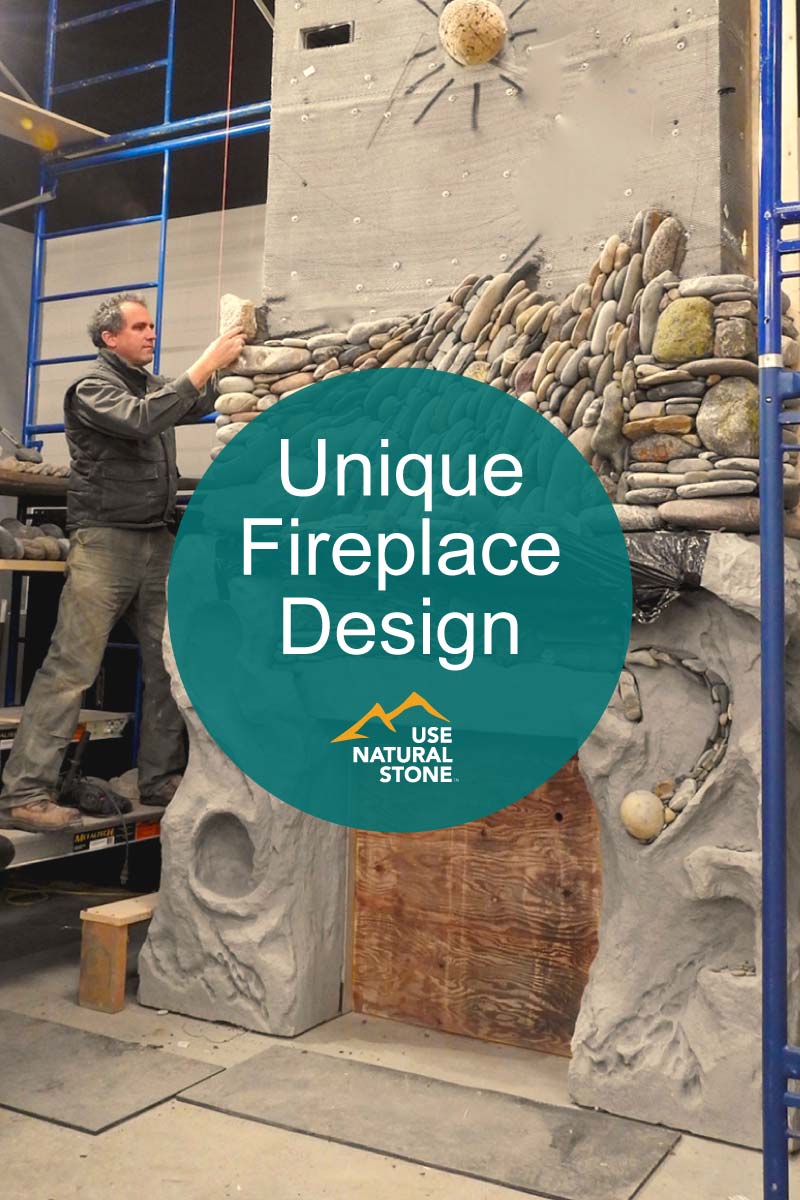 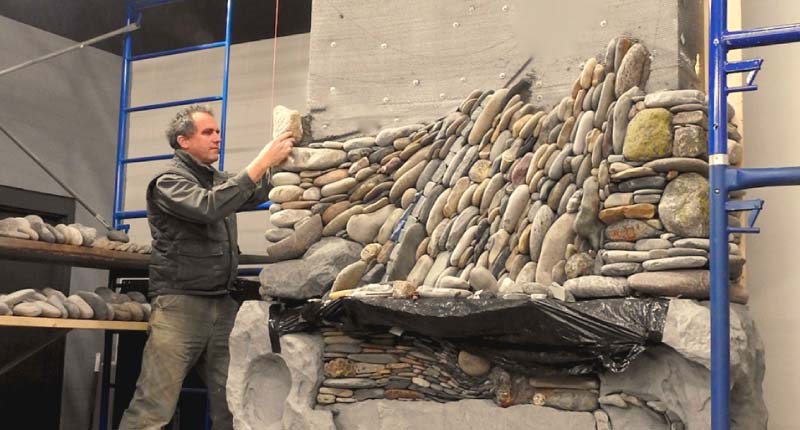 Note: An earlier version of this article appeared in the Spring 2022 edition of Building Stone Magazine. All photos appear courtesy of Andreas Kunert and Ancient Art of Stone.

Philosophers and artists have long been fascinated by geometric forms and what gives them meaning beyond their shape. In art and nature there are aesthetically pleasing proportions found, as Michelangelo purportedly did, in what’s referred to as sacred geometry, or the golden ratio (1:phi or 1:1.618…). By channeling an innate sense of this proportion, stone artists Andreas and Naomi Kunert can imbue their unique works with movement, depth, and feeling.

Owners and principal artists of Ancient Art of Stone, the Kunerts create what they call “one-of-a-kind stone portals for individuals, businesses, public museums, and art galleries.” At their 15-acre studio in Cowichan Valley, British Columbia, Canada, they first source stones, then design and build artistic and functional fireplaces, stone doors, spas, mosaics, megaliths, and murals and ship and install them across North America.

According to Andreas, “Everything we do is personal — it’s an intimate experience — and built intuitively. We delve in and go down the rabbit hole and become inspired; our work is the product of this experience.” 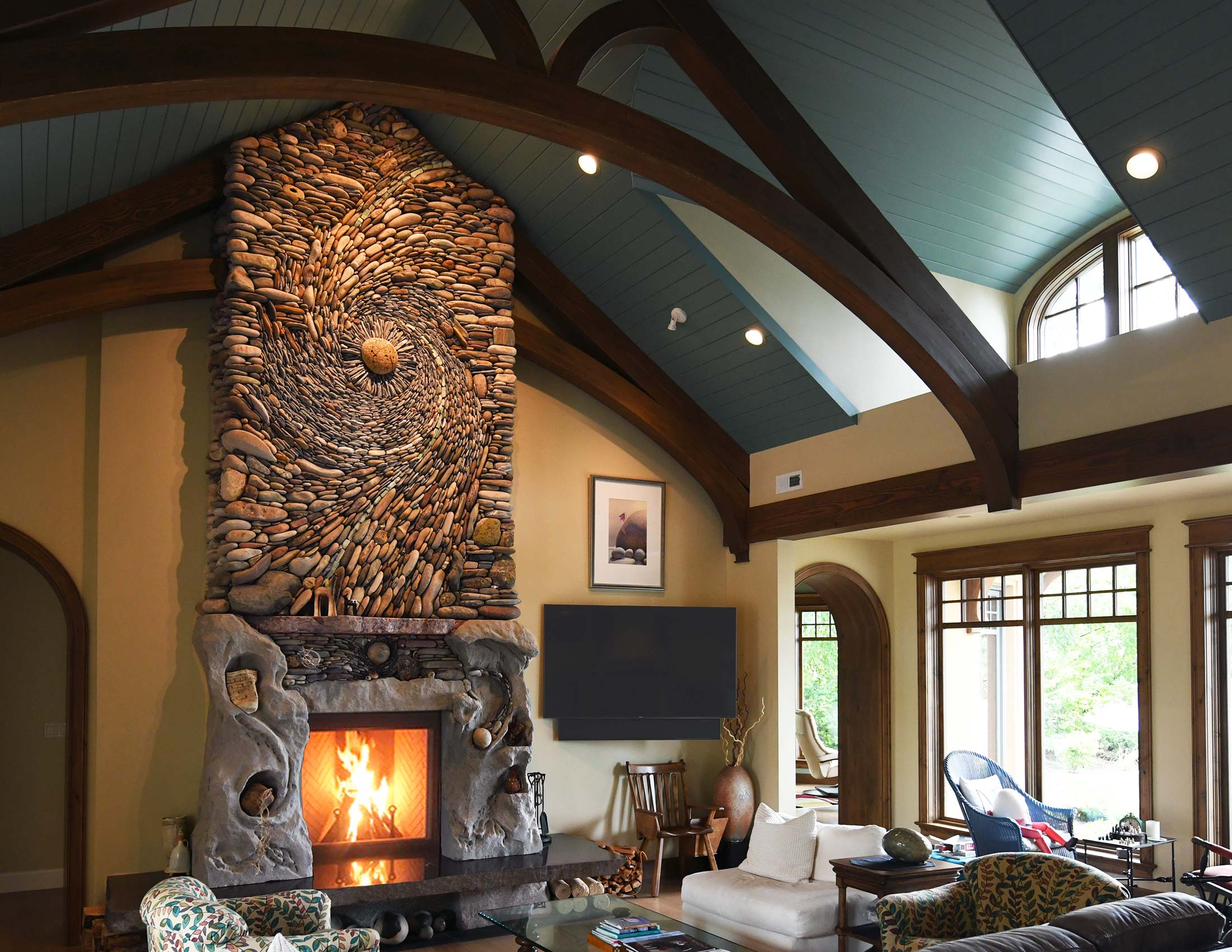 Meeting of the Minds

Andreas credits Vermont for his love of stone. He grew up in a sparsely populated rural area in that state and spent a lot of time on his own outdoors. An artist by nature — he would eventually dabble in painting and photography — he always loved what he could do with stone, “from the minute to the megalithic; it’s very appealing,” he says.

As a younger man, Andreas was an avid extreme skier and discovered a passion for “life’s mysterious flow.” His adventures took him to the mountains of Europe, and wherever he went he photographed the landscape. He was intrigued by the patterns he saw in nature. He moved to Canada and started K2 Stone Quarries on Vancouver Island. The business grew and was successful. In 2009, he met Naomi, who had been on her own journey.

“I had an early fascination with archaeology and the native Cree people,” Naomi says. She grew up on the Saskatchewan prairie in a home located near a stone grotto and a natural spring where people would visit on pilgrimages for healing. “We’d find arrowheads, stone hammers, teepee circles,” she says, which ignited an “interest in the ancient in terms of stone and how people used it.” In 2000, she got an undergraduate degree in fine arts at the University of Saskatchewan and focused on sculpture and extended media, stone being one of them. Faced with cancer in her late 20s, she found solace and healing with the First Nation medicine people. She credits them with helping her develop visionary abilities that still guide her today. By the time she met Andreas, she says, she had already dreamt of him. More than a decade and five children later, they complement each other in spirit and in business. 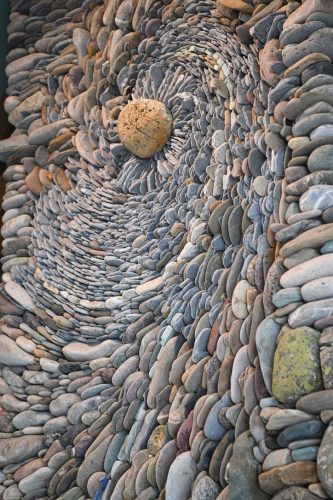 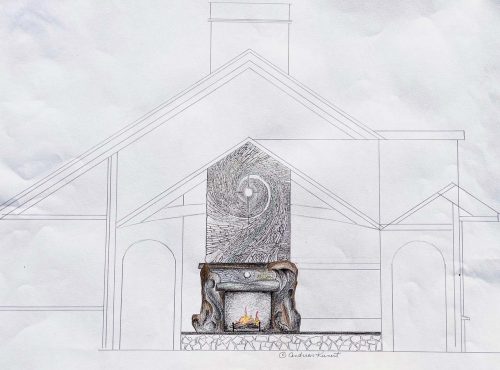 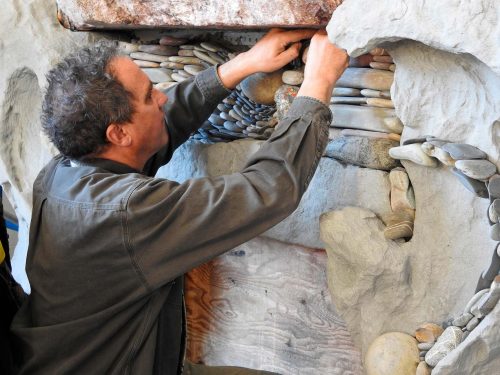 The Kunerts’ projects usually take a year or more and begin with individual stones—lots and lots of stones. While clients often offer them stones, the Kunerts also travel around to fill a trailer with stones from gravel pits and glacial moraines, or they’ll select pallets of natural stone from quarries. “The First Nations also gather stone for us. We’re always searching,” Andreas says, adding that the type of stones they prefer are flat and curved, formed by glaciers. “They’re not river stone. A river tumbles stones round: it doesn’t flatten them. But a glacier will cleave them. We often find them wherever a glacier has been and has left stones behind, even in [a place you wouldn’t expect] like Utah.”

The fireplace project known as “Memories Surround Me” was commissioned by a couple in Spokane, Washington, who were about to move to a home they were having built. While the project did begin with stones, it also began with a client wanting to have something that represented love writ large.

“They met as teenagers and have been married 50 years. They love fly fishing. Every time they go fishing, they bring home a pebble or a saucer-shaped stone. The wife joked that [they’d collected so many stones] they could hardly park in the garage anymore,” Andreas says. The husband asked the Kunerts to use the stones to create a fireplace that he could give his wife as a Christmas gift in tribute to their years together.

The Kunerts work hard to know their clients. “Naomi has the ability to tune into a client and who they are and what we should bring to them in stone or crystal,” says Andreas. She sees working with clients as a spiritual journey. “Not necessarily something religious,” she says, “but the nature of the stones and their honoring can bring connection and peace and stability to our clients’ lives. We build with that intention. We’re building a sacred space that’s also functional artwork.”

As the Kunerts spent time with the Spokane clients, they learned about their hobbies like fly fishing and traveling, that they loved their old home’s unique architecture, and that they wanted to include niches on their fireplace to feature pottery and other small artworks. “We channeled the inspiration into three different design options for them,” Naomi says. Although their hand-drawn sketches can sometimes be detailed, the drawing ultimately has to be open ended. “We tell clients that we let each stone speak. You can’t always find an exact stone for the design.”

The Spokane couple brought about 10 percent of the stones to this project, and the Kunerts supplied the rest of the approximately 15 tons of stone used. Once the sketch was approved the heavy work began. 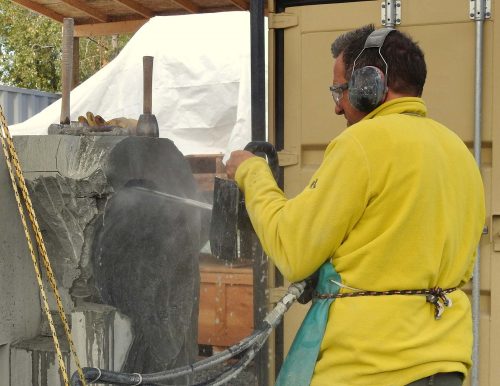 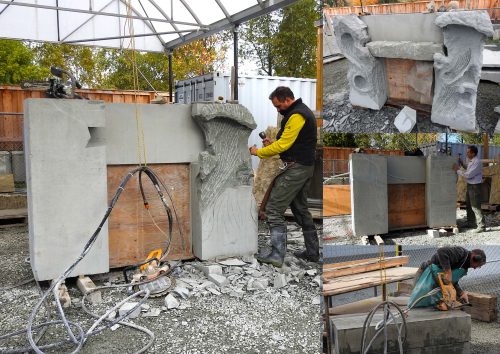 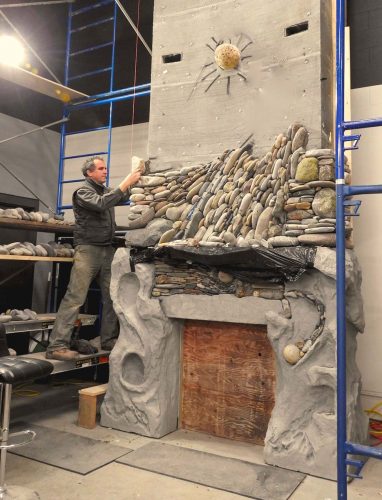 The fireplace eventually would live in a great room that had yet to be built on a home in a residential neighborhood. When completed, it would stand 22 feet tall. The first step was to make a poured-concrete and rebar substructure of about 18 feet that would be strong enough to hold the stone design embedded on it.

The fireplace was built from the bottom up, in two parts that would be connected on site. On the bottom half of the fireplace, the design incorporates two vertical pieces of sandstone, each two feet thick and each weighing one and a half tons, placed on either side of the firebox. These are connected across the top of the firebox by a 40-inch horizontal piece of sandstone, which is topped by a 12-inch layer of intricately placed individual stones and then an organic-edged granite mantle. Once on site they would add a hand-polished basalt hearth at the base.

The sandstone arrived as square blocks. Using a hydraulic chainsaw, ring saw, hammer, and chisel, Andreas carved into the basic shape to create alcoves and nooks. He then bolted the blocks from behind to the concrete substructure.

The top half of the fireplace holds the central inspiration stone to which the thousands of individual smaller stones find their way.

When the stones arrived, the clients’ contribution and others (from quarries in Colorado and British Columbia), the Kunerts organized them by color and hue, shape (flat or curved) and size. “Some were covered in lichen. Some could be used as feature stones; some would create flow,” Naomi says.

The stones were not numbered or laid out. Knowing where to place the stones, which are essentially a cladding, is where the magic happens. “As much as possible, even though we’re sculptors, we try not to alter the stone, and we use its natural form,” Andreas says.

While there’s a sketch to go by, “We try to honor the shape and color of the stone and how it connects to a particular client. We listen to the stone to see how it wants to be honored or incorporated,” Naomi says. “A stone is as much of a living thing as a plant; it has a certain biology and a matrix.”

The Spokane clients had one large round stone that they wanted to use as the central focal point. “The idea was that the design showed their life together leading to this stone,” Andreas says. “The stones would mean nothing to the average person; they would see just a pile of stones. But to us, they have meaning.” Adds Naomi, “We talk about noticing if a stone is missing from a pile of thousands. They become part of you; it’s like an artist knowing if they have all their tools.”

As with every project, while Andreas mortars the stones to the substructure, he says he takes his time and “feels the stones, listens to the stones. Every day you don’t know which stone is next. You go with a feeling and follow that feeling. It’s hard to describe.” 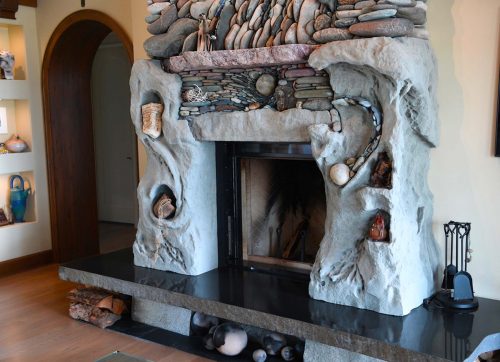 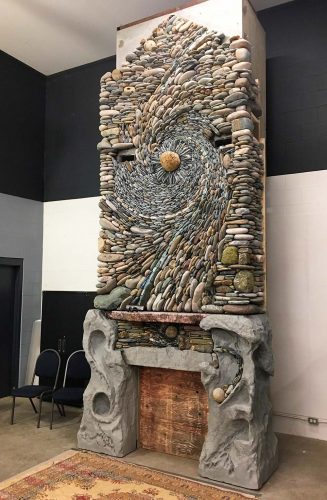 Which brings us back to the golden ratio and sacred geometry. Andreas says that his perception of the world has always been mysterious and remarkable, and that he has an innate ability to see the sacred geometry and recognize this pattern in nature, people, and materials. “As a child, I discovered I could play with stones on the ground and make these patterns. I wasn’t told about sacred geometry and the math behind it until well into my career.”

Working from the bottom up on this fireplace, Andreas placed the stones in curve and swirl patterns with mortar, bolts, or fastening pins depending on the stone’s size. He also incorporated arrowheads, hammerheads, scrapers and other “hidden treasures.” It was a complex dance to match the design to the concept and make the piece still feel natural and unassuming.

Conscious that the final product would flex and stress on a truck bed, Naomi says, “It’s overbuilt. Probably stronger than anything someone might have built in their home.” Within the concrete is a metal substructure of rebar and plates that runs all the way to the top to connect with lifting eyes, or eye bolts, so a crane could hook into and lift it.

Once the structure was completed, the Kunerts had it loaded onto a truck in two parts and driven 450 miles to Spokane, where the next challenge faced them: craning the 30,000-pound artwork into an exclusive residential neighborhood with homes surrounding the client’s newly built but unfinished home in freezing temperatures. “Usually, our clients have major acreage. This was a tight site,” Andreas says.

The house itself sits on a concrete slab. The great room would be built around the fireplace, whose own foundation goes six feet into the ground. Once the fireplace was craned into place, the two parts, bottom and top, were welded together on the back with steel plates.

“The fireplace will be the strongest part of the house,” Andreas says. “The builders ran the beams into the top, so the fireplace is actually holding up the roof.”

The fireplace’s concrete structure is embedded into the wall, along with the firebox. The builders placed drywall against the sides of the fireplace “nice and snug,” Andreas says, with few gaps for the Kunerts to fill in. 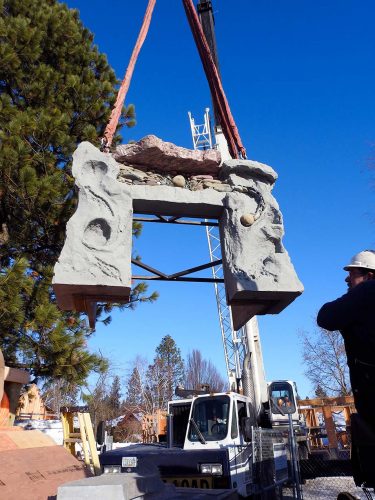 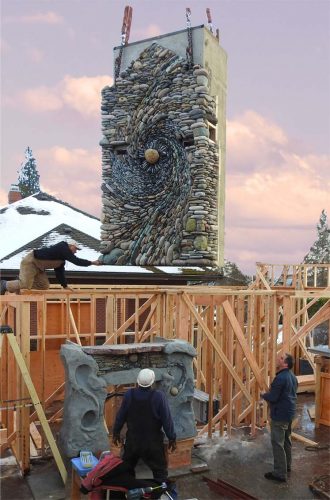 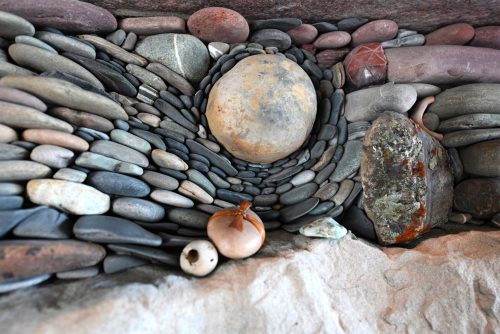 The clients are thrilled with their fireplace, their amazingly beautiful and unique piece of functional art that captures their love for one another and their lives together. “On the day it was delivered and lifted into place the client’s wife cried, exclaiming her joy,” Andreas says. Now that the home is complete, they describe the commission as the heart of their home and their favorite room to sit in.

For the Kunerts, after a year of living with and working on a project, it’s always difficult to say goodbye. “It’s personal to us. That’s a piece of our life. Everything that happened in our lives during that year is written into that artwork. Each piece becomes a part of us. When the truck leaves, it’s like ‘There go the children.’ We’re happy and proud but we’re hurting.” 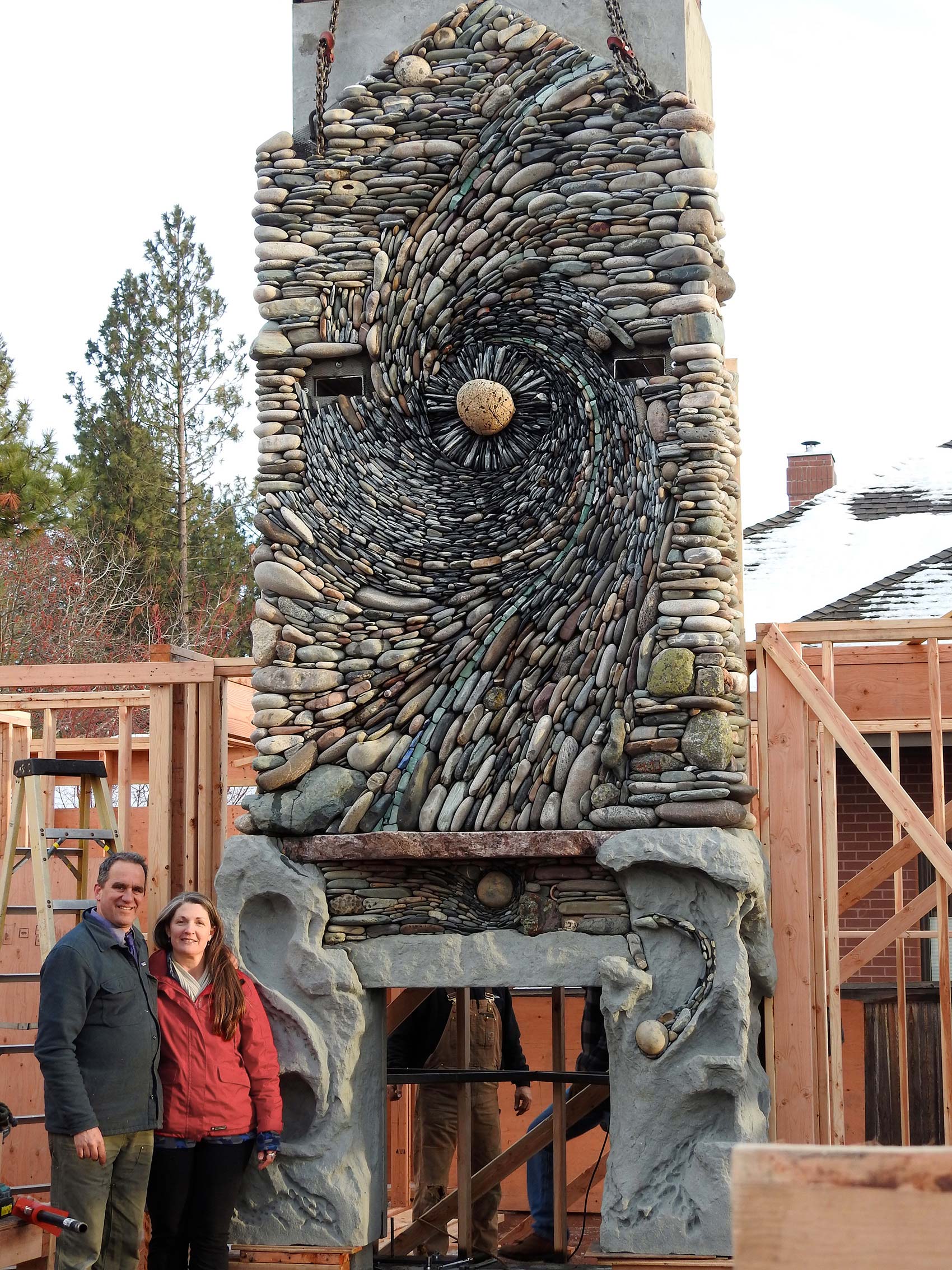 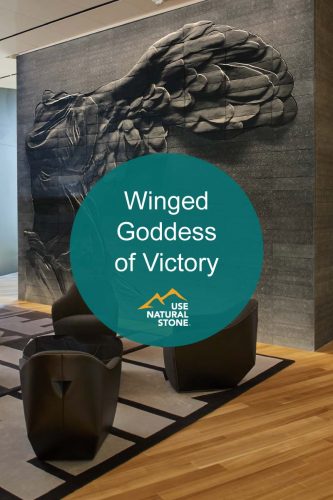 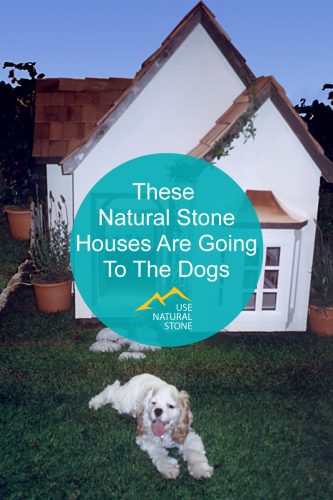 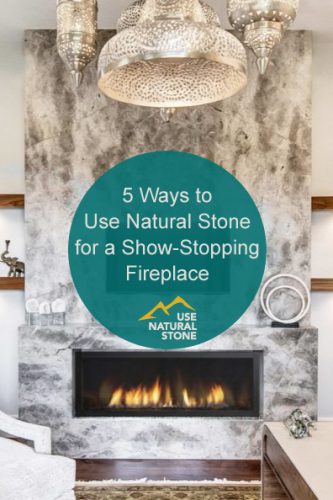