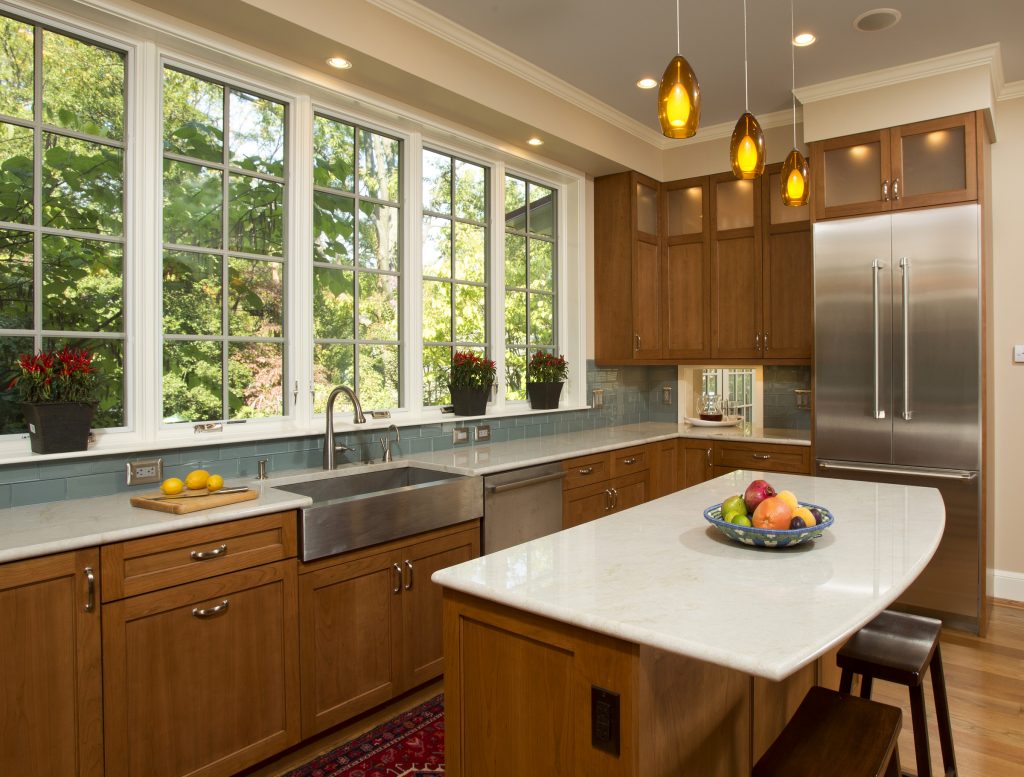 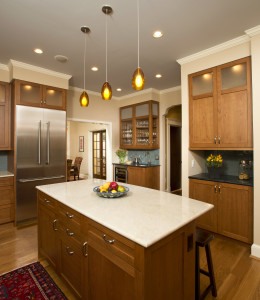 Using contrasting colors and two different types of stone in the same kitchen may seem unconventional, but it’s actually an attractive trend that is growing in popularity. Ellen Forte, a homeowner in Washington DC, saw the idea in a magazine and liked the idea of using different types of stones as accents.  Taj Mahal quartzite paired with a dark soapstone were the two stones selected for Forte’s kitchen makeover.

Forte was living in a Spanish-style custom home built in the late 1920s.  The home had already suffered through a bad kitchen renovation that she was determined to correct.  “There were seven doors that led into or out of the kitchen,” says Forte.  “I cook a lot and I wanted a highly functional kitchen, but didn’t want it to stick out.  I wanted it to match the quality of the rest of the house.”

To bring the space up to snuff, Forte hired Washington-based Landis Architects/Builders, who proposed sacrificing an underused panty in exchange for eliminating some of the doors.  The reconfigured kitchen provided enough space for an island large enough to sit around, ringed by more counter space bordering the back half of the room and all topped by quartzite.

Quarried in the United States and Brazil, quartzite is a metamorphic rock that starts off as sandstone. Heat and pressure harden the stone as traces of iron, oxide, and silica produce the patterns and colors seen on the stone’s surface. 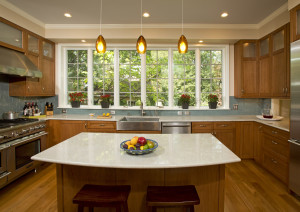 Samantha Stinocher, marketing communications specialist at Arizona Tile in Mesa, Arizona, has noticed a trend towards quartzite in modern kitchen designs. This may be because of its form and function. “It’s definitely a popular choice. People like the creams and the gold colors, plus quartzite is very durable.”

Forte’s design partner on the job also liked the idea of mixing things up a bit. “Using two types and colors of stone creates less monotony in the space,” says Chris Landis, architect and one of the principals at Landis. “It’s fun to get in there and look around for little surprises.” One of the surprises was actually related to the price of quartzite, which is called Taj Mahal for a reason. “It’s very expensive and I think it was a bit over the budget, but they just fell in love with it.” says Landis. 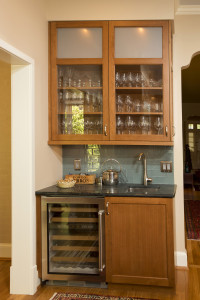 The contrasting soapstone was used on the opposite side of the room to top the bar area, which includes a utility sink and wine cooler. There’s also a second run of soapstone topping a stand of cabinets on the other side of the doorway.  “They’re relatively small areas that don’t get as much heavy-duty use as the island,” says Forte.  “The soapstone is such a beautiful option. It’s like having a piece of art in your kitchen.”

Landis liked the soapstone because it doesn’t show up on everybody’s design pallet.  “We don’t see it used very often.  Usually when you tell people that have to do a little maintenance on something, they run the other way.”

Any type of natural stone requires some minor but regular maintenance to keep things smooth on top of the counters.  Stinocher says, “Any stone has a certain degree of porousness, which is why we recommend that quartzite should be professionally sealed once a year.  Soapstone can etch, so you should always use a cutting board. It doesn’t have to be sealed but we recommend oiling it once a year.” 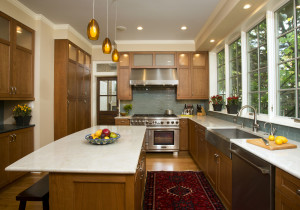 Soapstone is a relatively soft stone that is quarried in several countries, including the United States and Brazil.  Soapstone is a metamorphic rock formed mostly from talc and magnesium.  It has been used for thousands of years by the Inuit people and others as a medium for carving highly valued sculpture. Stinocher sees a trend of using more soapstone gradually moving across the country.  “It’s always been very popular and readily available in the eastern half of the United States, because some of it is quarried in Virginia,” she says.  Stinocher also believes the stone remains a favorite for countertops because it is nonporous, naturally stain resistant, and naturally anti-bacterial.