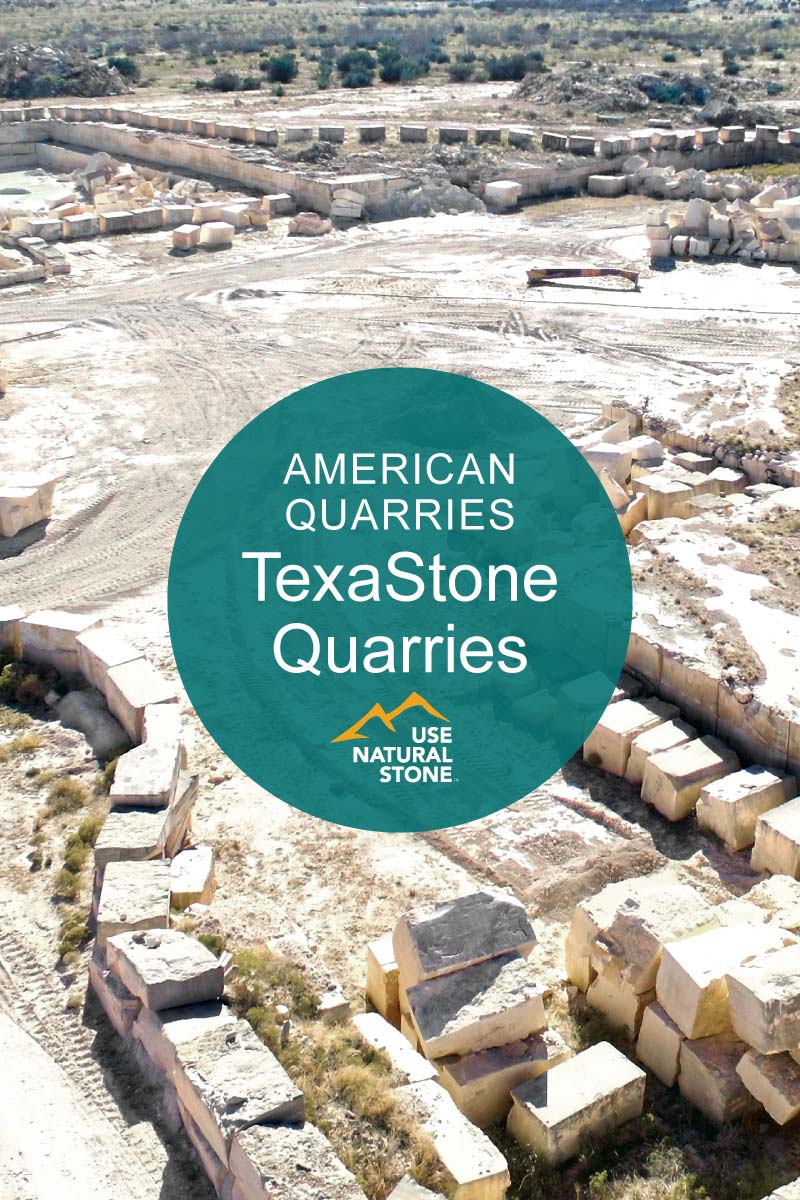 TexaStone Quarries – A Sustainable Product from the Permian Basin 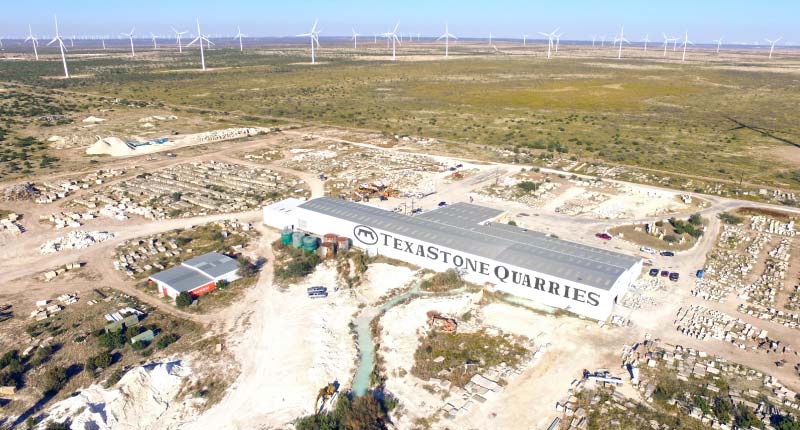 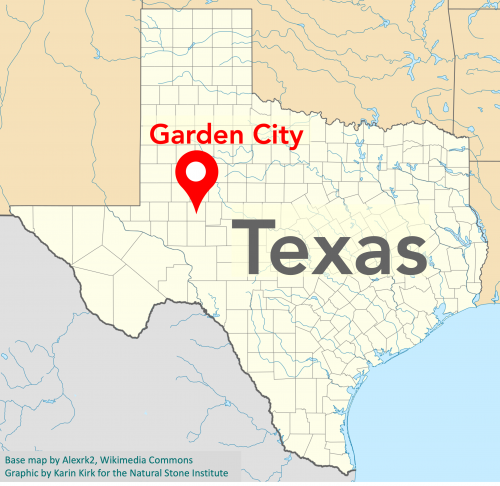 The Earth is nature’s ultimate hardware store. It gives us building materials in the form of stone and gravel, stores of underground water, deposits of oil and gas, and minerals for all kinds of uses. In certain parts of Texas, all these resources can be found in the same place.

TexaStone Quarries operates in the Permian Basin of West Texas, a region best known for producing massive quantities of oil and gas. But the TexaStone business model is far more stable than that of the fossil fuel industry. Quarrying began before derricks and pump jacks dotted the landscape, and while the fossil fuel industry suffered major losses through 2020, the quarries soldiered on.

TexaStone’s limestone slabs and blocks are enduring, non-polluting resources that don’t suffer the boom-and-bust cycle of their neighboring industry. While hydrocarbons burn brightly for a short time, a solid slab of natural stone serves its purpose for decades. At the completion of its useful life, natural stone can return to the earth, leaving no toxins in its wake and no legacy of greenhouse gases lingering behind.

‘A broom and a hose’

TexaStone’s first quarries were opened in 1990 and were cut into shelves of limestone that naturally sit right at ground level. All it takes to access the uppermost layer of limestone is “a broom and a hose,” says Vince Gray, the Production Manager at the quarry.

The prospects began modestly, “with one saw up on top of the hill, out in the open,” recalls Gray. Operations gradually expanded and TexaStone Quarries officially became an entity in 1995, and their infrastructure, equipment, and capabilities have been growing ever since. The company is owned by Brenda Edwards, who started the business with her late husband.

TexaStone taps into 16 individual quarry pits to produce six different varieties of limestone. A 55,000 square-foot fabrication shop sits on the property, equipped with state-of-the art machinery. A workforce of 32 people keeps the quarries, the mill, and the office humming along.

Stone gets shipped all over the country “and internationally as well,” says Quade Weaver, the Sales and Project Manager. Weaver credits the company’s expansion on their collaboration with architects, masonry contractors, and design firms. “We developed relationships over time,” he says. “We had architectural firms that would use the material over and over, and it became more and more visible.” 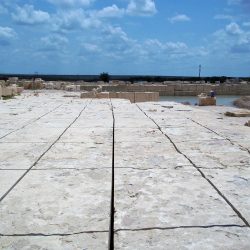 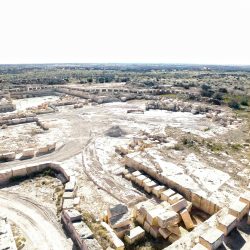 Natural stone has an environmental advantage over manmade competitors

“We compete with a lot of manmade products,” says Weaver, echoing a trend seen throughout the stone industry. The biggest competitor to TexaStone is concrete ‘cast stone,’ “It’s something that we compete with on a daily basis,” says Weaver. Although concrete is usually cheaper at the front-end of a project, Weaver appreciates that “longevity and sustainability” are major advantages of natural stone.

Weaver distinguishes natural stone from the imposters by making the case for the smaller environmental footprint of natural stone. “That’s a driving factor for us to promote that natural material and what we’re doing to quarry it,” he says.

Concrete production accounts for a whopping 8% of global greenhouse gas emissions. Concrete is made by heating up ground limestone; the process to heat the limestone is energy-intensive, and then further CO2 is released when the limestone breaks apart via chemical reactions. By contrast, a slab of limestone is already completely formed by natural processes, and limestone is a natural store of CO2. As the world strives to lower greenhouse gas emissions, it makes sense to keep CO2 locked up inside stone and out of the atmosphere. 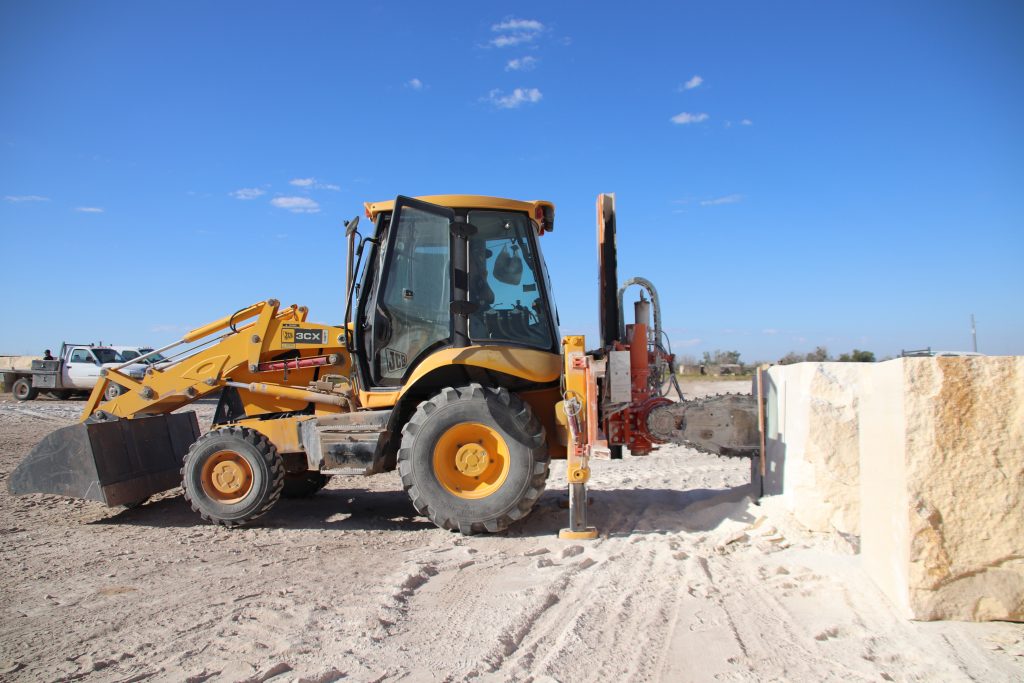 “Actually, we were pretty well within the standard before the standard was written,” says Gray, noting that their initial effort was primarily one of measuring and tracking water consumption, energy usage, and waste output. The ability to track their environmental performance showed where more improvements were possible, and the company’s baseline certification set the stage for further efficiency.

“We continually monitor our water usage and electricity,” says Weaver. “As you shrink that, that’s what allowed us to jump up to that next level.”

Part of the sustainability standard is transparent communication to the community, and the TexaStone website shows the company’s environmental performance over the past 5 years. Their goal is to reduce energy consumption by 5% each year over the next five years.

TexaStone shares their environmental performance on their website. The company was able to reduce energy use by switching to efficient lighting and by minimizing idling time for equipment.

Water is a scarce resource in West Texas, and the operation uses 80% recycled water in the quarry and 93% recycled water in the fabrication plant. Water is treated in 1-acre settling pond located on the property. Limestone mud settles to the bottom, and clear water accumulates on top, which is then pumped back to the plant. The leftover ‘sludge’ is an inert slurry of lime mud and water, not unlike the material at the bottom of the seafloor when the limestone originally formed. The company uses some of the slurry for road base and berms, and it can also be used as backfill. It’s the primary waste product of the facility.

The company was able to lower its energy use by “reducing idle time on all of our machinery, whether gasoline or diesel,” says Gray. That accounted for most of the company’s energy savings, while also saving money on fuel and wear and tear on engines.

“Those were the two biggest things that took us up to platinum,” says Gray.

Gray describes other improvements: New, efficient lighting was installed throughout the fabrication shop, and office paper is shredded and used as packing material.

The quarries are surrounded by oil and gas wells, but across the road dozens of wind turbines churn in the steady breeze, another nod to a changing economy that’s branching out from the volatile swings of the oil and gas industry. Texas is by far the largest producer of wind energy in the USA. 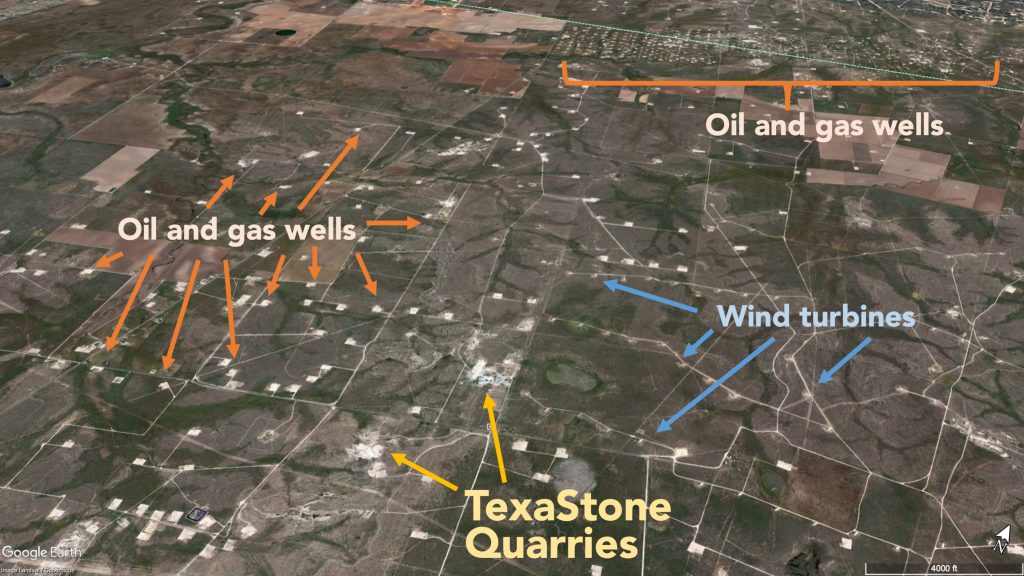 Oil and gas wells tap into deep shales and limestones, while TexaStone quarries younger limestones near the ground surface. Wind turbines rise above it all, turning moving air into electricity.

The TexaStone property is about 12 miles long and contains 16 small to medium-sized quarry pits that vary in depth from 10 to 20 feet deep. In the larger quarries, “there’s a natural seam exactly where we’re cutting,” says Gray, “so it really makes it nice.”

Across the property, the geology varies enough to produce an array of colors and textures, and the company sells six varieties of limestone. The two most popular colors are Hadrian, a fossil-rich stone with a neutral tan color, and Cedar Hill Cream, an evenly-patterned limestone with warm tones of pale yellow. The other four colors are quarried a few months at a time to build up a supply that will last a year or more. TexaStone Pink is one of the more unusual offerings; it’s a fossil-laden, pastel pink stone. “As far as we know, this is the only place you can find it domestically,” says Weaver.

While their neighbors are wildcatting for pockets of oil and gas, the TexaStone drill rig sniffs out new varieties of limestone. Some of their explorations have panned out, and others haven’t. Gray describes the results of exploratory drilling as “sometimes exciting, sometimes disappointing!”

Four of the TexaStone varieties have been tested to withstand repeated freeze-thaw cycles and are most commonly used as exterior cladding. These are Cedar Hill Cream, Hadrian, Permian Sea Coral, and Texas Pearl.

“Our workforce is something to really be proud of,” Gray muses, as he recalls the improvements over his 14-year tenure at TexaStone. Modern machinery, less physical labor, and continually improving craftsmanship have been the highlights of the company’s evolution. Thanks to technologies like CNC machining, “we can take a 3D scan and a 5-axis machine can carve whatever that scan shows,” says Gray.

“The workmanship is high quality,” he says. “I hate to toot our own horn too much, but we do very nice work.” 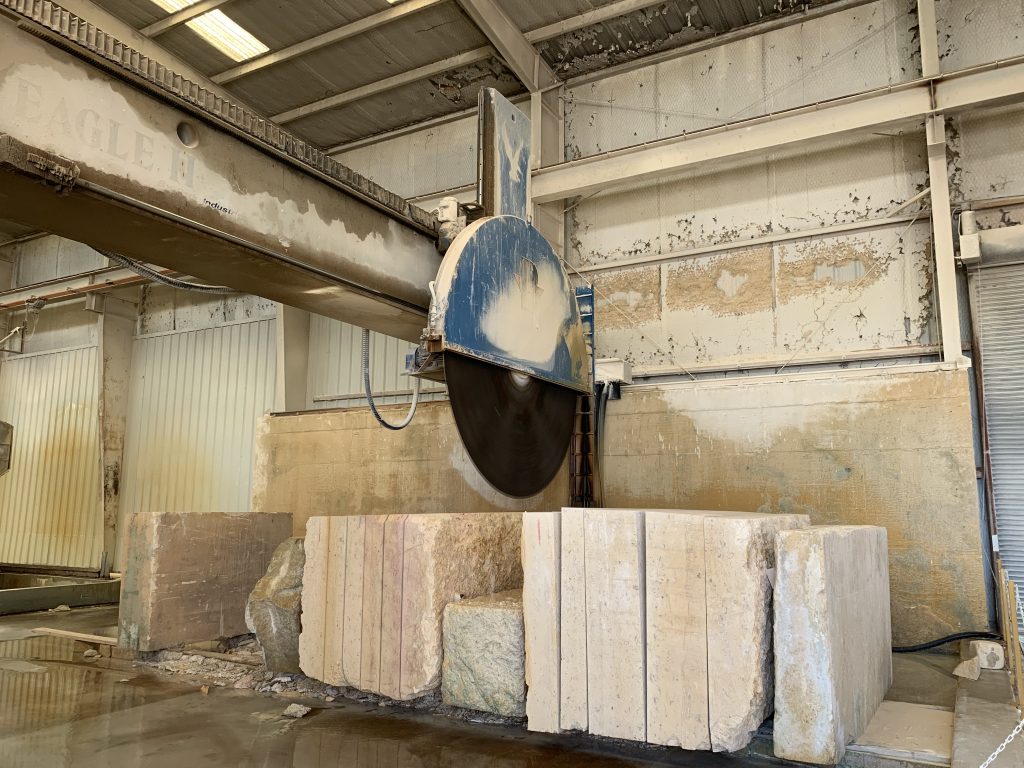 The pandemic kept many of us home through 2020, which led to a surge in residential projects. And what better way to spend a hot Texas summer than by the poolside. “The pandemic seems like it caused an increase of people putting pools in,” says Weaver.

A swimming pool surrounded with fossil-laden limestone on a sweltering midsummer afternoon might be a reasonable analog to the time when the TexaStone limestones formed. They’re around 125 million years old, from the Cretaceous Period – famous for dinosaurs, a hot climate, and seawater lapping up onto Texas.

Texas has had an on-again, off-again relationship with the ocean throughout most of its history. During Cretaceous time, North America was drifting away from Europe and Africa. The Gulf of Mexico had been attached to western Africa, and as the continents pulled apart, the Atlantic Ocean was born as seas filled the growing rift between the continents.

A continental shelf called the Comanche Shelf formed in West Texas, marking the edge of the widening ocean. Seas advanced over Texas, but they did so in pulses. The region went through alternating periods of dry land, tidal flats, and open water.

TexaStone limestones were formed during a time when a shallow ocean covered the area, and the characteristics of the rocks and fossils indicate that the water was relatively shallow and wave-agitated.

Fossils include oysters and reef-building organisms called rudists which anchored to the seafloor. Coiled shells of ammonites are present; these creatures swam through the seas and fed on plankton floating in the seawater. Ammonites went extinct along with the dinosaurs, but their relatives live on as squid, octopus, and cuttlefish.

Incidentally, these limestone layers are much younger than the rocks that contain oil and gas. The TexaStone quarries are right at ground level while oil and gas wells tap into deeper, Permian-age rocks that formed more than 100 million years before the TexaStone rocks came into existence. 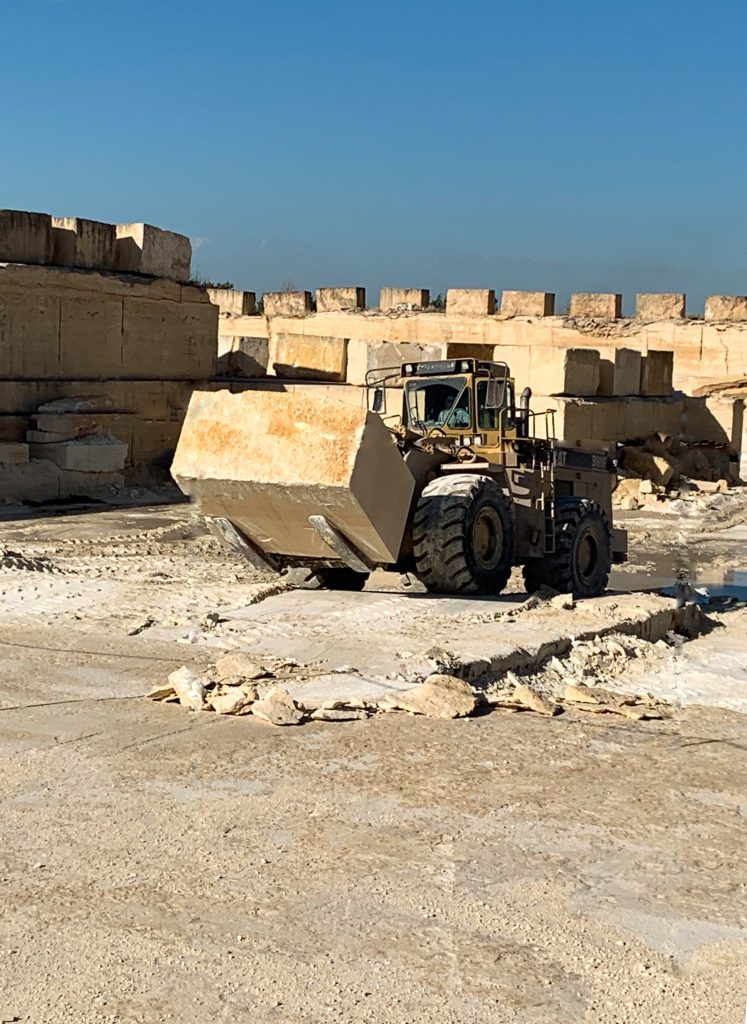 Garden City and the surrounding communities benefitted from their sparse population by avoiding the worst of the COVID-19 pandemic. “The county hasn’t had many cases,” says Weaver. “We haven’t really skipped much of a beat here.”

Gray notes the increased safety and sanitation practices at the company: “Everybody’s washing their hands; everybody’s got a mask on.”

The pandemic caused a slowdown of new projects in the pipeline during 2020, which reduced the company’s slate of upcoming work. “That was a little concerning” says Weaver, “but things seem to be easing up now and I’m seeing more new designs.”

“There seems to be more interest in domestic materials, which is very exciting,” Weaver says.” From a sales standpoint, it looks good. Things are opening up.”

Weaver expects 2021 will be a year of recovery. “Even though the oil industry is down, construction is still pretty strong in Dallas, Houston, and San Antonio,” he says. “It looks bright.”