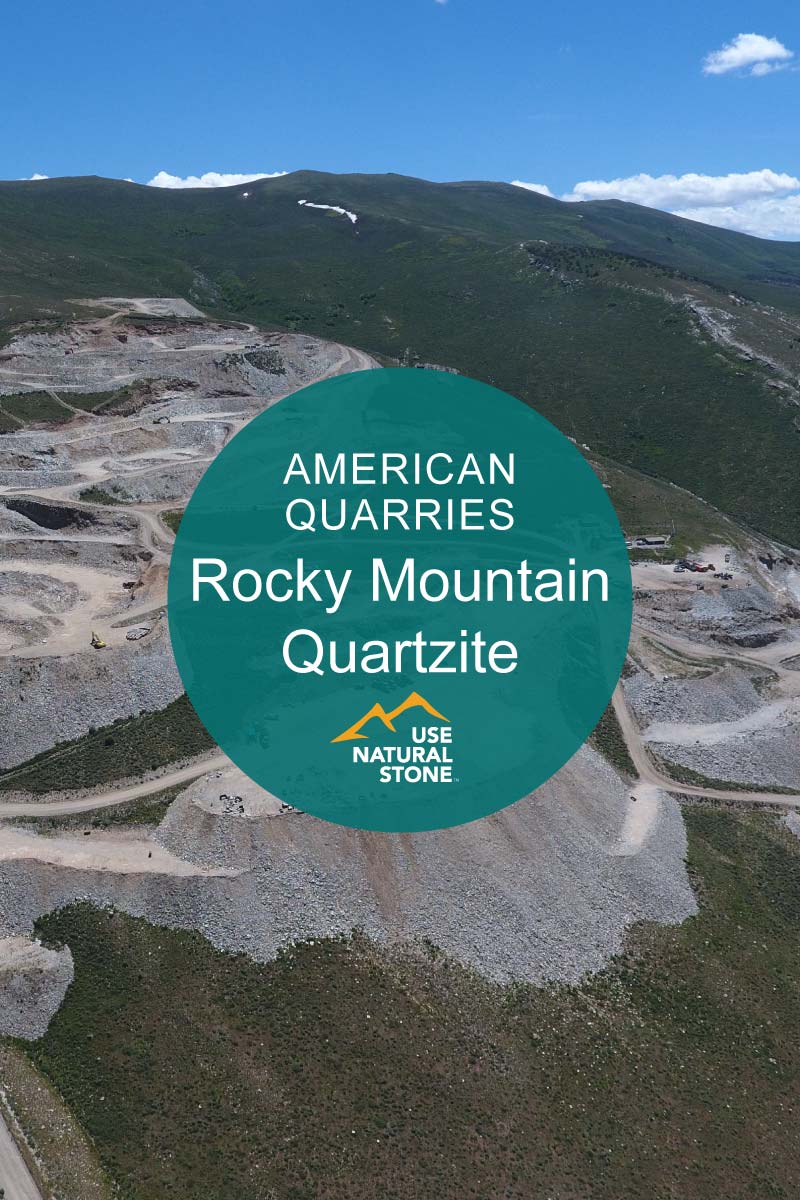 Rocky Mountain Quartzite: An Iconic Stone from the American West 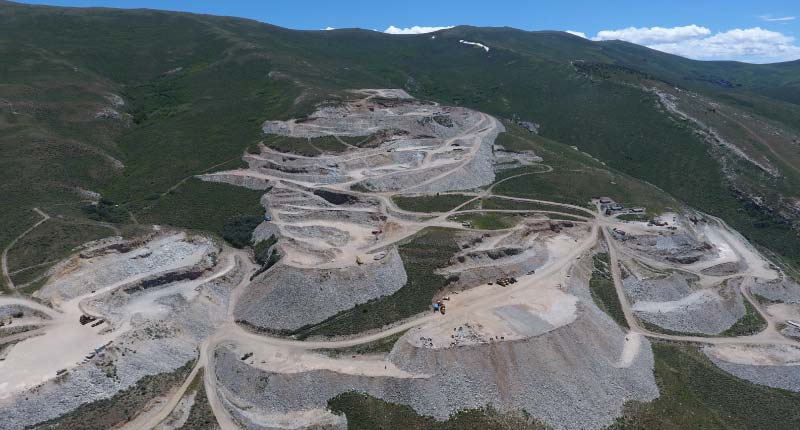 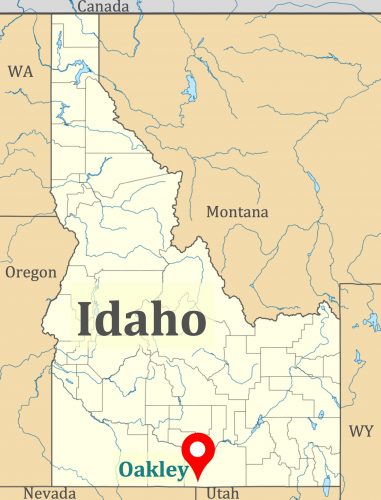 In 1952, Gary Mullard loaded a pile of quartzite into his pickup truck, drove down from the mountainside and into the nearby town of Oakley, Idaho, and declared the boulders for sale.

At the time, in a rural agricultural area with few nearby markets, it seemed doubtful the idea could succeed.

But this quartzite had qualities unmatched by other stones, and steadily it gained ground as a viable product. By the 1980s, Rocky Mountain Quartzite was fetching twice the price of other stones, and it was sold in 20 states and Canada. Dubbed “Oakley Stone,” the sparkling quartzite became a significant source of income to the region, and several quarries opened in the area. Today, Northern Stone Supply ships 50,000 tons of quartzite and granite to distributors across the U.S. and into Canada, infusing the local economy with $80 to $90 million of economic activity annually.

The story of Rocky Mountain Quartzite is a classic American success story that brings together all the necessary elements: favorable geology, a product that could distinguish itself from others, and a business plan and workforce that could develop the company to its full potential.

Natural layers are thin and strong

Quartzite is one of the most popular and in-demand stones today. But way before quartzite was a darling of the stone industry, this particular quartzite was recognized for traits that make it especially useful. Most of us already know that quartzite is a strong, durable rock, but Rocky Mountain Quartzite is more than that. Its white quartz layers are interspersed with bands of glittery mica, and the stone cleaves along the mica planes, resulting in a useful, yet natural shape. Better still, the mica minerals add an ethereal beauty to the stone, imparting a silver or gold shimmer to the surface of the slabs.

The combination of strength and thin layering is the winning formula for Rocky Mountain Quartzite. With most stones, thin layers tend to be weak. But the recrystallized quartz crystals are fused together solidly, such that slabs less than an inch thick are plenty strong enough to use as patios, walkways, or building stone. Typically, stones need to be at least 2 inches thick to withstand those uses.

Thus, for a given weight of stone, Rocky Mountain Quartzite can cover twice as much area. This reduces shipping cost and simplifies projects. It makes the stone usable as a veneer and appeals to DIYers who needn’t perform feats of strength to build a garden path.

The recipe of strength, versatility, and local provenance has garnered Rocky Mountain Quartzite a devoted following. This beautiful quartzite has become a popular building stone in the mountain west, and throughout the United States and Canada. Northern Stone Supply ships about 25,000 to 30,000 tons of finished quartzite every year.

The story of Rocky Mountain Quartzite begins as beach sand around 600 million years ago. Grains of quartz sand eroded off some of the planet’s oldest rocks and settled in a shallow ocean. After each layer of sand was laid down, a pulse of clay washed in, interrupting the white sand grains with a thin, dark blanket of sediment. On top of that, more sand grains flowed in. Then another wash of clay. That sequence repeated itself with remarkable regularity, as thousands of feet of sediment piled up.

The layer cake of sand and clay was eventually buried by miles of rock, fusing the sand grains into a dense sandstone. A series of tectonic collisions occurred along the west coast of North America as small landmasses, carried along the conveyor belt of the Pacific Ocean floor, got shoved into North America. Thus, the entire western portion of the U.S. was compressed. This event crumpled up the formerly flat-lying layers of rock and gave rise to the Rocky Mountains.

About 50 million years ago, the compression stopped and then about 17 million years ago, the tectonic motion ran in reverse, pulling and stretching the continent. The region around Nevada and southern Idaho was stretched apart to form “basin and range” topography. Remarkably, in some areas the land was pulled apart so much that it became twice as wide as it previously was. As the landscape was expanding, some areas sank downward, making valleys, while other segments of rock rotated and bobbed upward, forming mountain ranges. The stretching caused younger rock layers near the surface to be rifted apart and allowed “windows” through which deeper, older rocks were exposed.

Thus, a rock that had been buried for more half a billion years found its way to daylight again. After all that it had endured, the quartz sand grains were now welded solidly together in a dense, hard, crystalline stone. The clay layers that interrupted the sand had been transformed into sparkling mica.

Quarrying is an operation “completely dependent on hands”

A few more geologic coincidences helped this rock become straightforward to quarry. Thanks to the way the stone was uplifted, the quartzite is found right at the ground surface, so no excavation is needed to get to the stone. Secondly, the layers of the rock run parallel the surface of the landscape, meaning that individual seams can easily be followed. Because the rock is situated with convenient access, the operation can be low-tech. Even today, little equipment is needed at the quarry.

Blocks of rock are pulled out of the slope with excavators, then hand-split along the mica layers to create smooth, natural surfaces that look as if they’ve been dusted with glitter. “It’s an operation completely dependent on hands,” says Karla Forest, Marketing Director of Northern Stone Supply. Skilled quarriers “delicately work along seams,” as they follow the thin zones of mica. The split stones are then sorted by thickness and size and stacked in crates.

A drawing from a 1984 mineral patent application for Northern Stone Supply. The drawing depicts the simplicity of the quarrying, thanks to convenient geology that put the quartzite right at the surface. 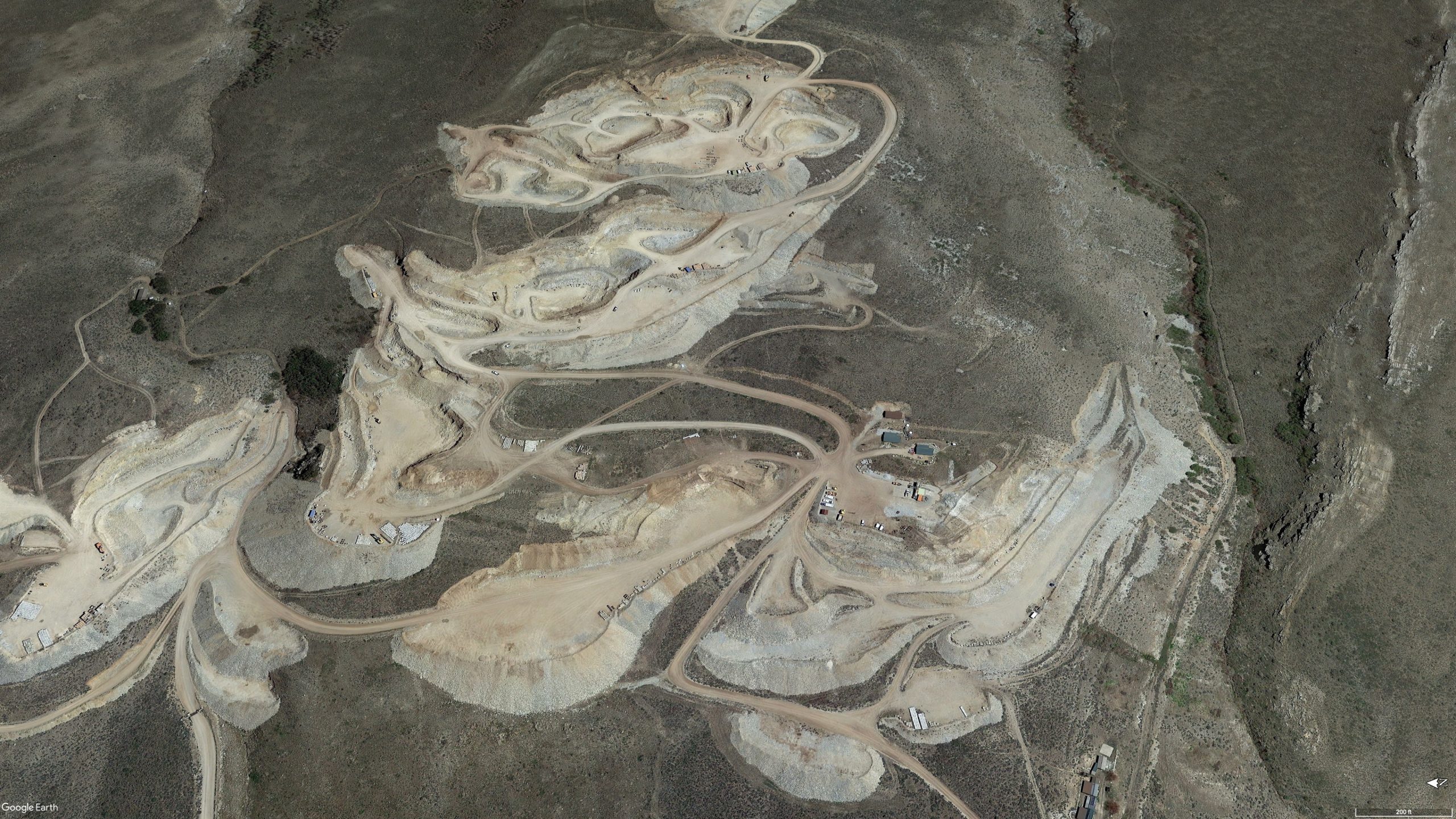 Google Earth image of the quarries near Oakley, Idaho. This image is about a half mile across. Northern Stone Supply works 1300 acres of quarries in the area.

Gold, silver, white, and grey: A diverse set of products emerges from the quarry

The town of Oakley sits 8 miles north of the quarries. A steady flow of trucks brings stone down from the quarries, into the town of around 900 people. About half of the quarried stone is left in the natural shapes that are split by quarriers. The rest of the stone is fabricated into thin veneer, tiles, dimensional paving stones, and tumbled stone.

Idaho’s harsh winter weather means that quarrying is seasonal, running from April through October. In the winter, a smaller workforce fabricates the previous year’s harvest into various products.

Thanks to the diversity in the mica minerals within the quartzite, four distinct colors of stone come out of the quarries: gold, silver, white, and charcoal grey. Along with the blend of colors, the stone occurs in layers of varying thickness, making for an array of products for different uses and tastes.

One of most popular products, according to Forest, is Honey Ledgestone, used as a veneer on building exteriors. This stone is offered in four styles, ranging from thin, uniform stones for a tidy contemporary aesthetic, to a more classic look with a wider variety of shapes and colors.

Sunset Gold flagstone is another customer favorite. The thin layering in the quartzite produces flagstone that is relatively lightweight but very strong – even when only a half-inch thick. Thicker seams yield chunkier blocks two or three inches thick, useful for pool coping, stone walls, or stepping stones.

Forest says the Sunset Gold is particularly popular in California, “that’s a huge market for us,” she says, explaining that the warm colors tend to be the most in-demand, while grey tones are also enjoying an upswing in popularity lately.

Rocky Mountain Quartzite is mostly used outdoors, but works beautifully as interior tile or flooring, especially when seeking to “bring the outside in,” says Forest.

To learn about evolving tastes and needs, Forest travels around the country to different distributors where she keeps her ear to the ground to learn what designers, architects and customers want. “We try to learn what’s new, and how we can respond and improve,” she says. 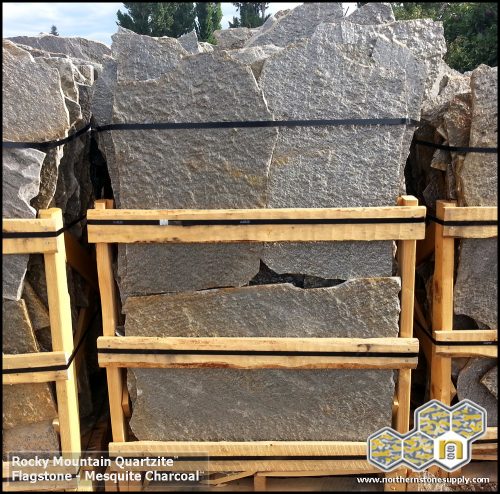 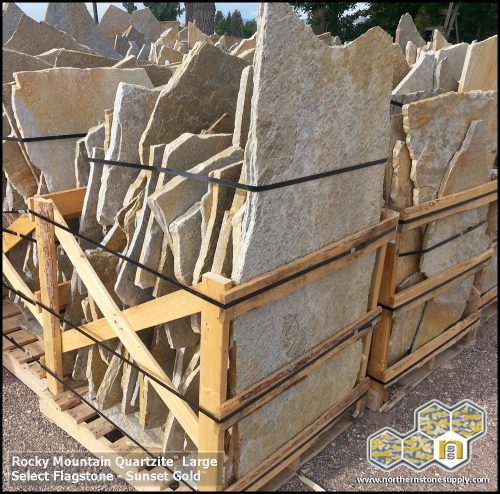 Adaptation is the key to success

Northern Stone Supply’s current owner, Greg Osterhout, made the transition from Vice President to owner in 2008 – just at the onset of the recession. Sales slowed throughout the industry and many companies went bankrupt. Osterhout saw this as an opportunity to invest in the company and its processes. “He bought equipment from companies that were going out of business,” explains Forest, “then used the downtime to learn new methods.” In particular, Osterhout figured out a better way to fabricate thin veneer. Quartzite’s hardness and tenacity means that it’s notoriously slow to fabricate. Osterhout figured how to make the fabrication faster and more efficient, bringing down the price of the veneer. Forest didn’t elaborate on the method, stating proudly, “He’s got a little bit of a secret there.”

After the 2008 recession, sales of thin veneer skyrocketed. “It blew up,” Forest recalled, and the company was able to climb out of the recession with strong sales. Thin veneer continues to be one of Northern Stone’s best sellers.

The company now faces another challenge as COVID-19 grips the world, triggering widespread unemployment, and creating uncertainty for everyone. But Forest is bullish for the health of the business. “The housing market drives our sales,” she explains, and the company has many months’ worth of contracts to fulfill. Quarrying and production are proceeding apace, and Forest expects demand to remain steady. 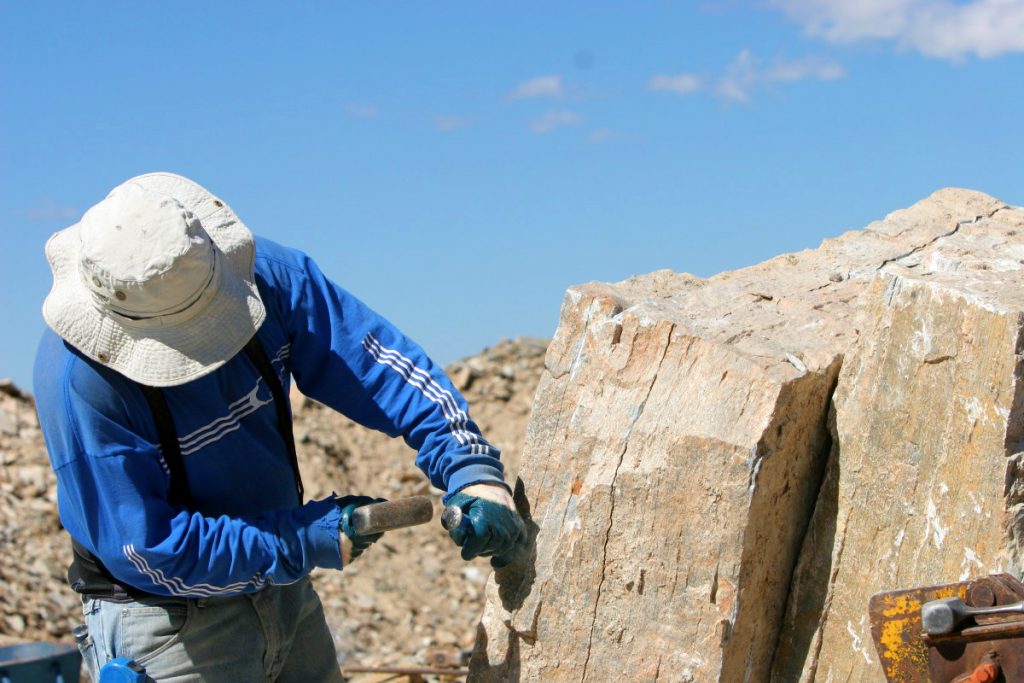 Northern Stone was the first company to achieve platinum level certification via the ANSI/NSC 373 sustainability program. “It’s not an easy certification,” says Forest, “It’s a big deal.” Forest feels that customers, designers, architects want to work with a company that shares their environmental and ethical values. “The certification is important,” she says, as a way to demonstrate a company’s commitment.

Osterhout is featured on the Natural Stone Council’s sustainability website, where he explained that the company was able to save both money and fuel by reducing engine idling. “We created an anti-idling policy that included educating our employees on the cost of excessive idling, adding anti-idling signage in cabs, and in most cases installing auto shut down timers on our large diesel equipment,” he wrote, adding that these improvements had duel benefits: “Good for the environment and our bottom line.”

The story behind the stone

While it’s possible to simply use generic materials originating overseas and purchased at a big box store, many customers are seeking more than that. A desire for locally sourced materials is playing an increasingly important role.

A stone’s place of origin “is one of the first things people ask about” when they visit stone yards, says Forest.

Forest sums up what Rocky Mountain Quartzite means to her: “This was quarried from a mountain; it came from near where I grew up.” This standout stone delivers on many levels: “People like the beauty, durability, and the story behind the stone.” 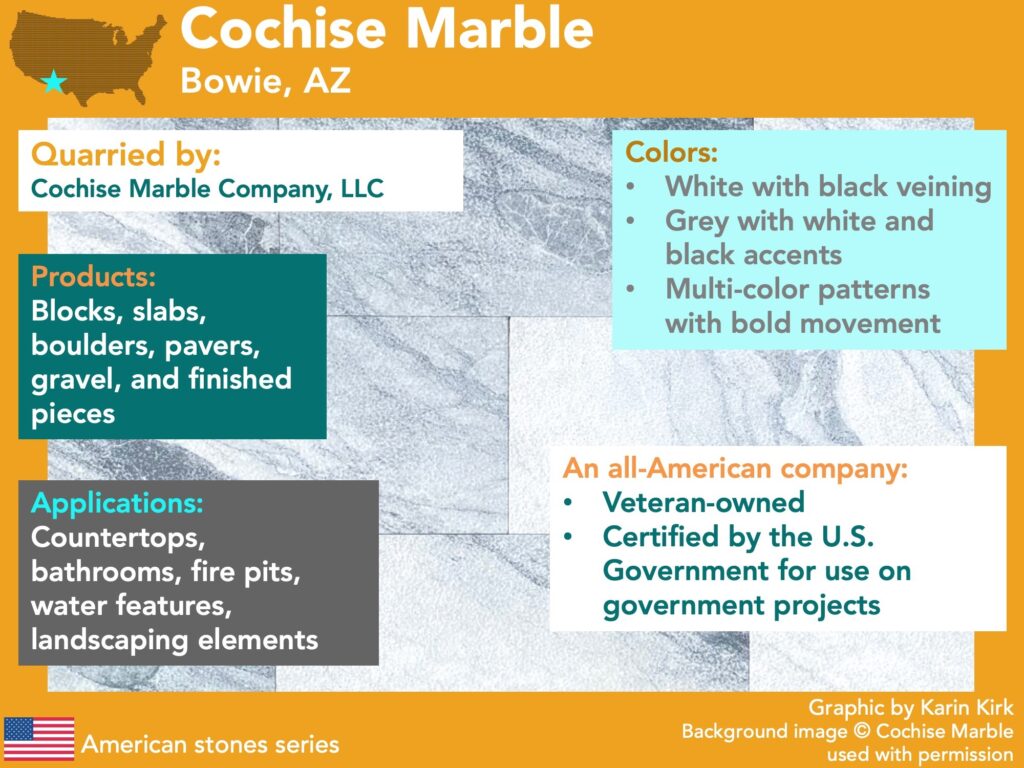