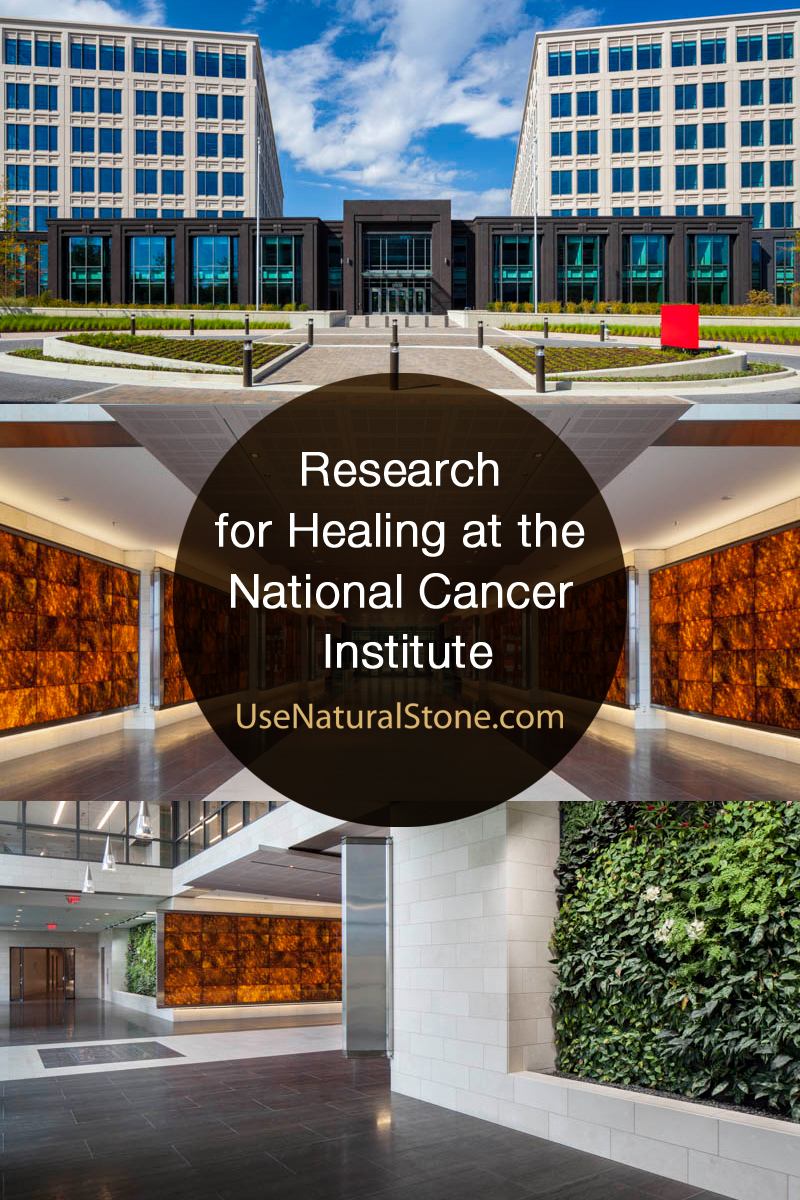 Research for Healing at the National Cancer Institute 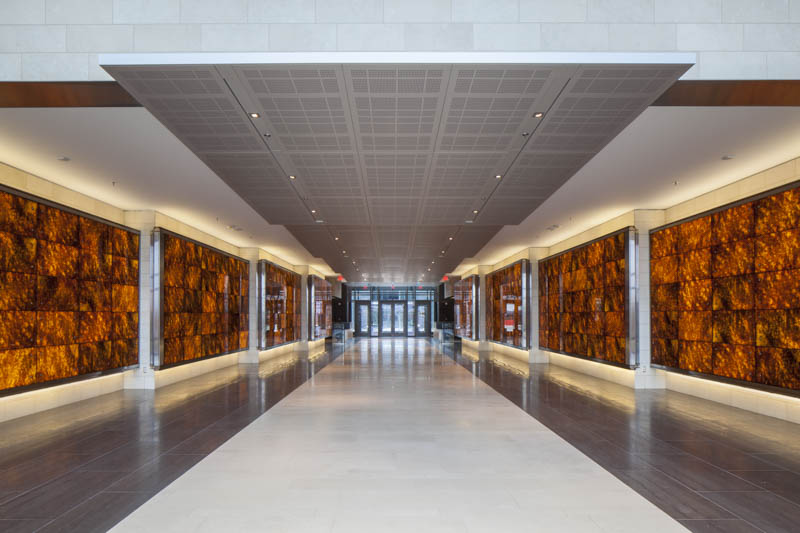 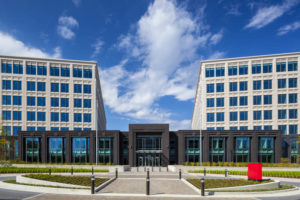 The National Cancer Institute’s (NCI) search for a new home came to a close in 2013 when they moved into a distinctive, postmodern building on the Johns Hopkins Campus in Rockville, Maryland. The building features a handsome front facade partially clad in Kodiak Brown granite. Twin 7-story towers connected by a hyphen-like glass lobby frame the resulting design.  NCI’s 2400 researchers and scientists are now diligently working inside on finding cures and treatments for cancer.

Choosing a dark natural stone was a bold choice. Michael Zajkowski, senior project designer on the project for HOK, said: “We wanted to do something that was warm and earthy, but we didn’t want anything too dark or harsh. It had to be a building that’s going to last and still be attractive in 15 to 20 years.  We wanted the building to be timeless.”

The building was developed by the JGB Companies with the idea of attracting a respected institution or a government agency as a tenant. This required a design that went beyond a typical glass box. The design team knew there was only one choice for the structure’s key elements. “Stone conveys that sense of permanence.  The gray and dark brown colors we used give the building the appropriate amount of gravitas,” said Zajkowski.

The front facade and entrance lobby are sheathed with Kodiak Brown granite in a water jet finish, a choice that was made long before the NCI moved in.  “We established the design pallet early on,” said Zajkowski. “We tried to find finishes that fit the budget and the design scheme.  The water jet finish makes the dark stone brighter and it literally sparkles in the sunlight.” 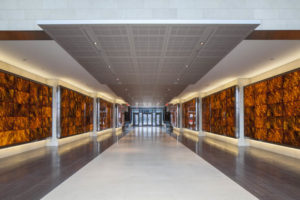 The Kodiak Brown granite was supplied by Polycor and quarried in Chute-Des-Passes, Quebec. Hugo Vega, VP of Sales for Polycor, likes the way the granite changes its appearance: “It’s a very dark brown with a somewhat small grain and consistent color, but from far away it looks black.”

The design team actually considered something darker than Kodiak but changed course.  “We looked at some black granites, but we happened to be looking for a brown to add that touch of warmth,” said Zajkowski.

Moving deeper into the lobby reveals a view that extends all the way to the back of the building to an existing pond behind the structure. The path to the inner workings of the research staff is paved with two different and contrasting types of limestone.

The outside borders are clad with Polycor’s St. Pierre limestone, which is quarried in Havre St. Pierre, Quebec.  According to Vega: “People love St. Pierre because of the very linear veining and the dark, chocolate color.  We get more and more requests for it because it provides a nice contrast with lighter materials. There are very few limestones that are that brown.”

Zajkowski said: “I like it because it’s a dark brown and a very handsome stone. It’s a dolomitic limestone so it has magnesium in it, which gives it more strength and color.”

The third player in the power trio at the National Cancer Institute is Jerusalem limestone, which provides a neutral contrast to the browns and near blacks. “It’s a nice white color that brightens up the space,” saidZajkowski. “We used it on the floors and walls. It comes from Israel, it’s fairly hard, not especially exotic but it ties things together nicely and plays well with other stones.” 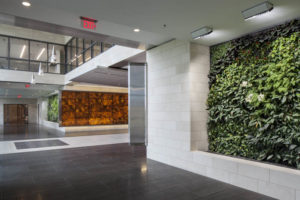 Jerusalem limestone is dolomitic and has an ancient heritage stretching back to biblical times. It’s the official building material of the city of Jerusalem and comes in a variety of colors ranging from grays to golds to salmon pink. It can be polished, honed, brushed, tumbled, and sandblasted.

The building achieved a LEED Gold rating and the design includes a green roof. Beyond the sublime use of natural stone on the interior, the lobby also features vertical gardens of live plants and a distinctive wall of decorative panels illuminated by LEDs.

“A lot of people think the panels are stone but they’re actually a wood veneer,” according to Zajkowski. “It’s made from the root ball of redwood trees. The veneer is sliced very thin and then backlit.  We drew it and did a mock-up but we still weren’t completely sure what it would look like till it was up.”  Natural wood panels combined with natural stone floors and walls all work very well in this vital place of research and healing.