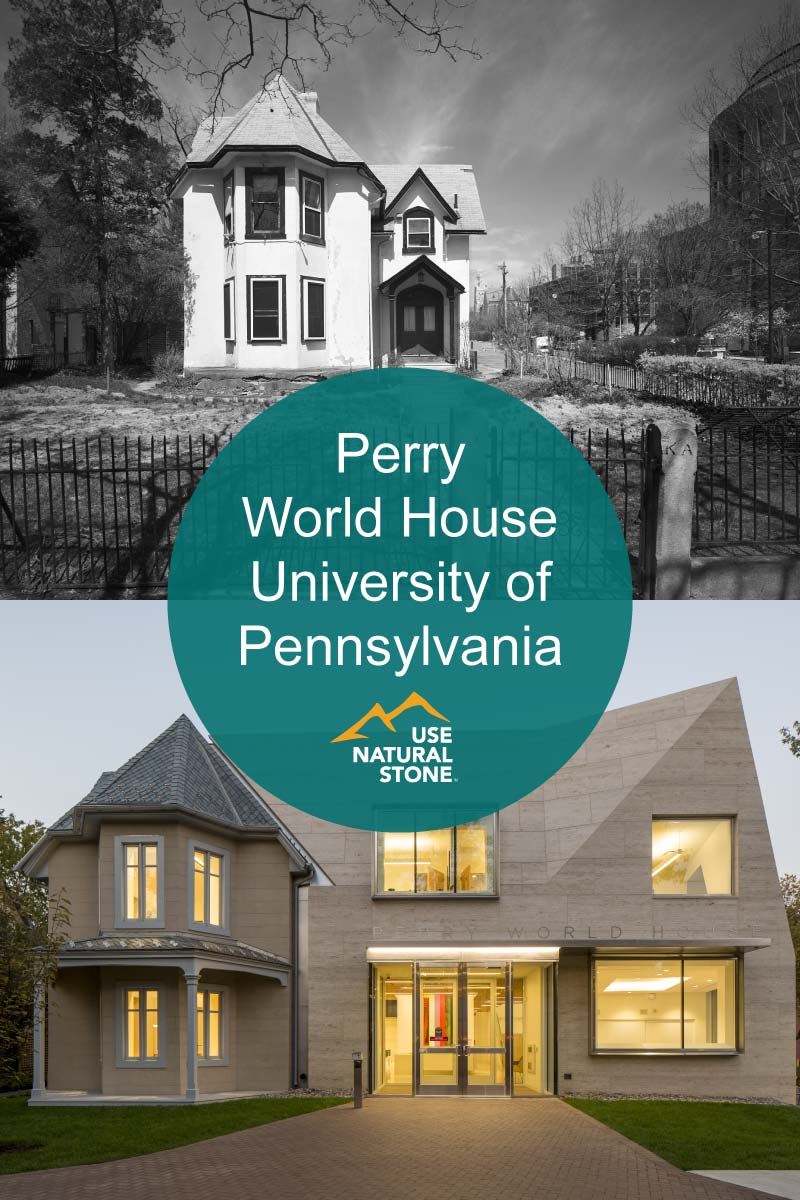 Perry World House: How the University of Pennsylvania Used Natural Stone to Transform its Oldest Building 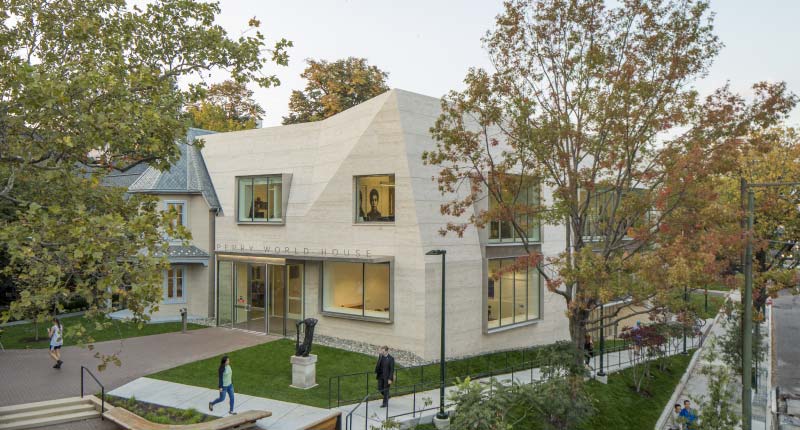 The newest building on the University of Pennsylvania campus in Philadelphia, PA is Perry World House. As a hub for international exchange and activity, the Perry World House anchors Penn’s global resources on an interdisciplinary campus while creating partnerships abroad. The building offers a wide range of spaces, including classrooms, meeting rooms, 14 offices, a 50-person conference room and common rooms. A glass-enclosed atrium called the World Forum occupies the building’s heart and is used as a multipurpose events space. The 17,400 square foot academic building combines the oldest building on the University campus—a historic house built in 1851—with a new Renaissance Beige limestone-clad structure.

According to Ed Parker, principal architect of 1100 Architect, the goal for the project was to create a new focal point for global policy research and international affairs at the University of Pennsylvania. “Shared by each of the university’s 12 schools, the building would need to support interdisciplinary exchange and a wide range of programs, from small-group study to 200-person events. Destined for a university campus with such a singular history of architectural achievement, the design, of course, would need to take the building’s context into careful account.” 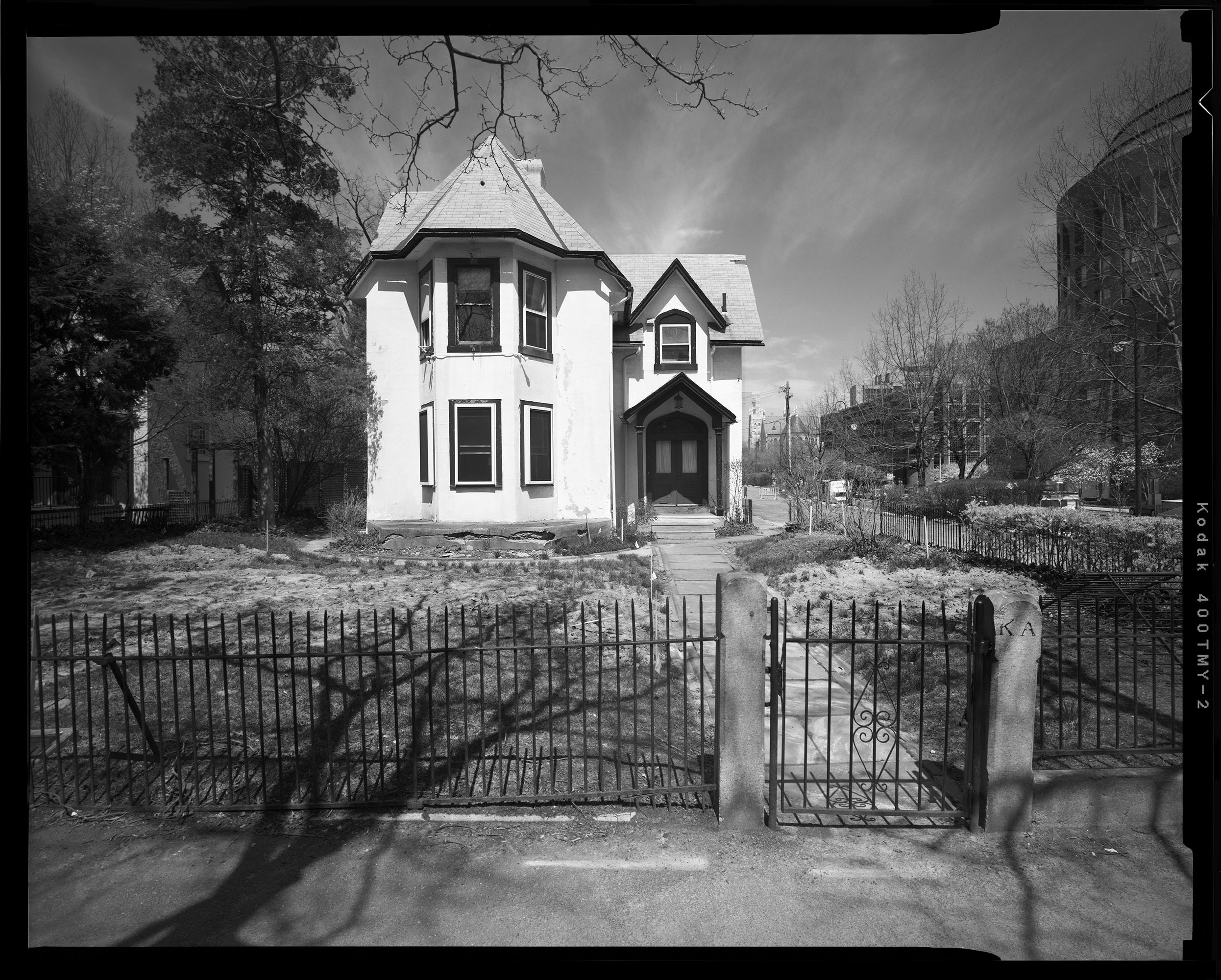 A portion of the original house was salvaged and reconstructed, per historic documentation, and its faux limestone stucco is referenced in the new addition, which is clad in natural limestone both inside and out. Merging old and new architectural styles offers the added benefit of matching both the pedestrian scale of Locust Walk on one side and the busy urban scale of 38th Street on the other. ABC Worldwide Stone was responsible for sourcing, selecting, quality checks, logistics and fabrication approvals on all 1,850 cubic feet of Renaissance Beige limestone. 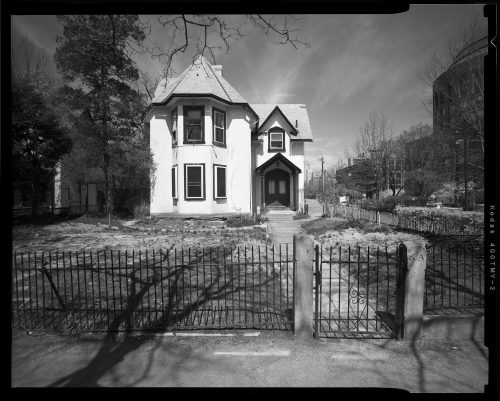 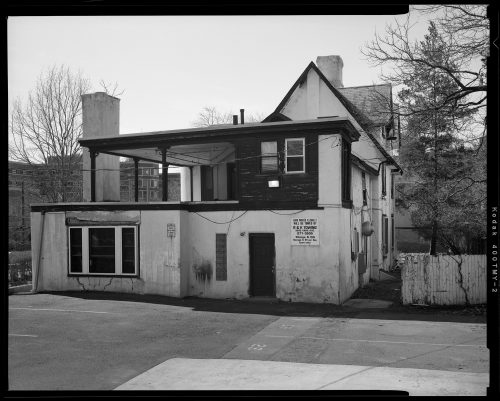 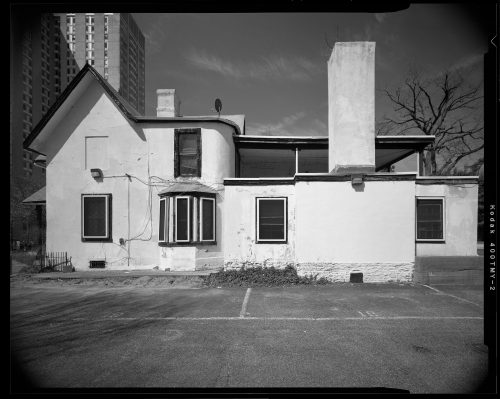 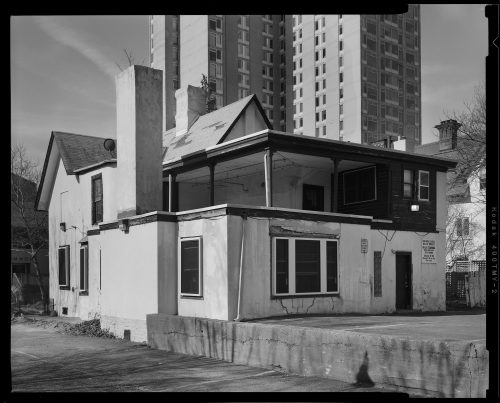 “This project began like pretty much everything we do here at ABC, an in-depth conversation with the architect,” said Ken Saretsky of ABC Worldwide Stone. “We listen and learn as much as we can about the client, project site, scope of work, the climate, application, budget and schedule. This dialogue leads to sampling and slab viewing here at our facility. We also provide preliminary budgeting, test data and images of projects that have used the same material. This project also spent a fair amount of time with finishes and, more importantly, engineering due to the unique geometry of the building. The complex form of the Perry World House structure, combined with the necessary exactitude involved in dealing with large panels of limestone, required an innovative approach to stone engineering. Further, we wanted to be respectful of the natural slope and grade of the surrounding landscape. The new structure was to be erected without impinging on or greatly changing the natural state of the land it was to sit upon.”

The project also presented more of a natural test — trying to find consistency in the large quantity of limestone that was specified. “We flew to Germany and handpicked materials several times throughout the process to ensure reasonable uniformity,” said Saretsky. “Further, we knew that any error in installation tolerances would stop the installation and cause scheduling delays and have serious cost impacts. The potential consequences of errors in installation tolerances demanded a thorough process of managing and verifying during the early engineering phases. We also had to account for the innate complexities involved with designs containing several integral mitered connections.” 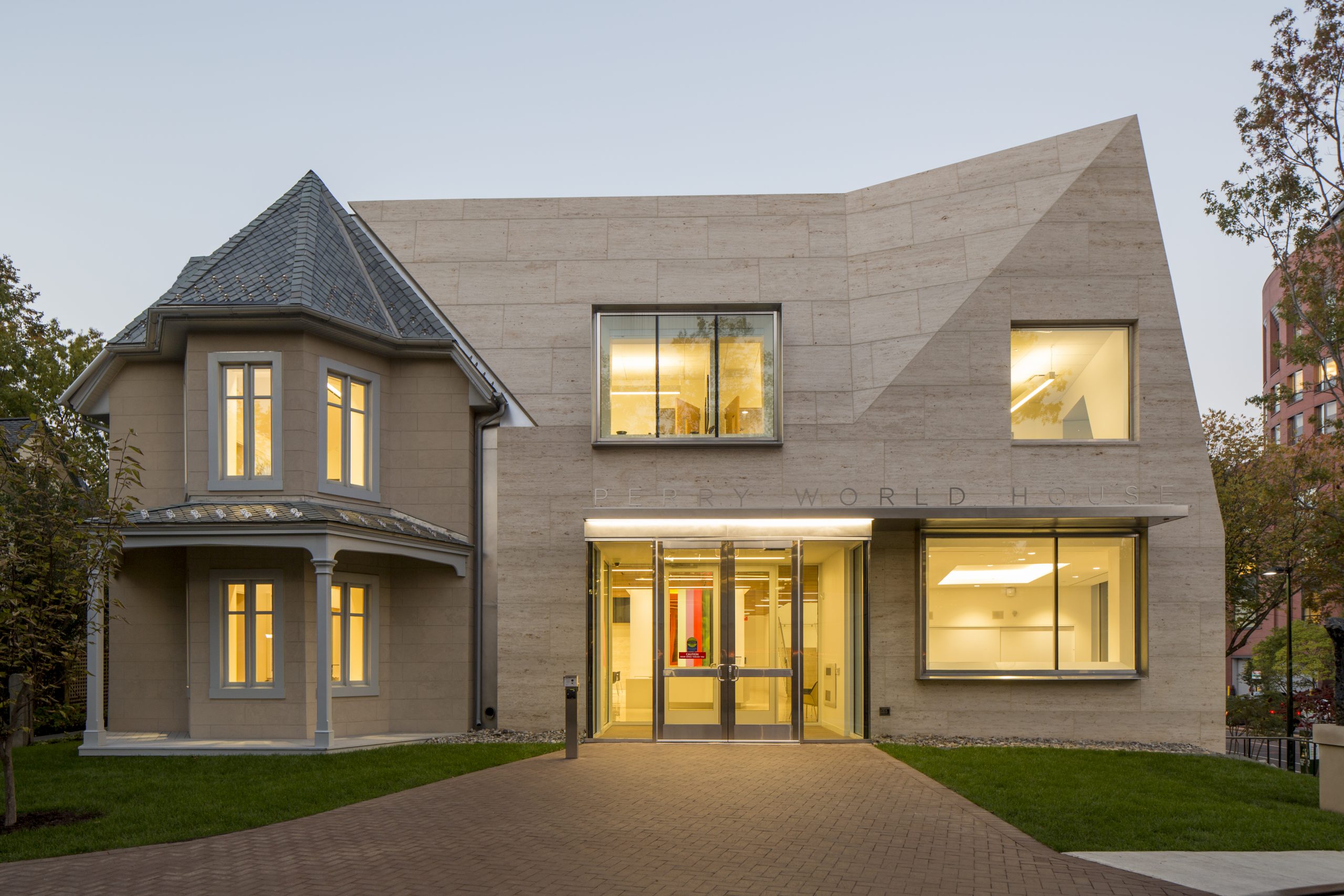 “Stone was integral to our design in many ways,” said Parker. “The building occupies a prominent site on campus, directly adjacent to the University president’s house, across the street from The Wharton School of Business, and along the main pedestrian thoroughfare, Locust Walk. We used stone differently for each elevation, tailoring the building to those different contexts. The stone allowed us to modulate the building’s scale, exerting a strong presence along the edge that faces a six-lane road, but becoming more residentially scaled on those edges that face a pedestrian path and campus houses. We selected Jura limestone for its performance characteristics, value and unique aesthetic veining. We considered other limestones but, with the client, determined Jura to be best suited for this project due to these considerations.” 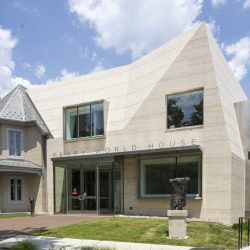 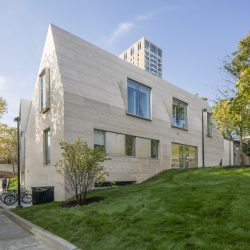 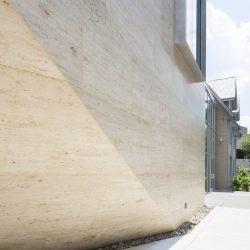 According to stone installer Edward Gilpin of Belfi Brothers, “We had six guys installing stone every day in a mortar bed installation. The stone was a nice product and ABC Worldwide Stone was excellent to deal with. I think overall everyone is pleased with the results.”

This was the first time in the U.S. that this vein-cut selection of the Renaissance Beige had been used for a cladding project. The interior design features Renaissance Beige limestone with a crosscut and honed finish — totaling 3,500 square feet of 12- x 24- x 5/8-inch-thick, cut-to-size pavers and various 1 1/4-inch-thick treads, platforms and risers.

“We used the Jura vein cut for the façade part of the interior walls, which are an extension of the façade so that the stratification of the sedimentary layers were exposed in the orientation it had in the ground,” said Parker. “We also used it on the floor of the interior of the building but in a cut that was parallel to the layers so (similarly) it was oriented in the way it would be naturally.”

With its open and flexible spaces, the Perry World House reflects and supports the aims of the institution it houses. The goal was to create an environment filled with natural light, where different perspectives can be discussed in different types of settings. Transparency between spaces reinforces an emphasis on cooperation between academic disciplines and varying world views, while the dialogue of the 19th-century cottage and a 21st-century building gives form to the timelessness of
these pursuits.

“This project is architecturally significant,” said Saretsky. “It’s prominently located at one of America’s most prestigious universities. David Piscuskas and his team at 1100 Architects cleverly married a historic building from 1851 with a new incredible stealth-like facade. The juxtaposition of old and new makes for a truly unique structure.”

The project received a 2017 Pinnacle Award in the Commercial Exterior category. Jurors called the project an amazing transformation of a declining historic house into a vibrant modern jewel of an office building. 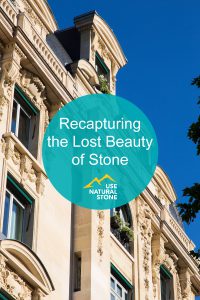 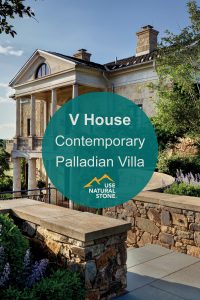