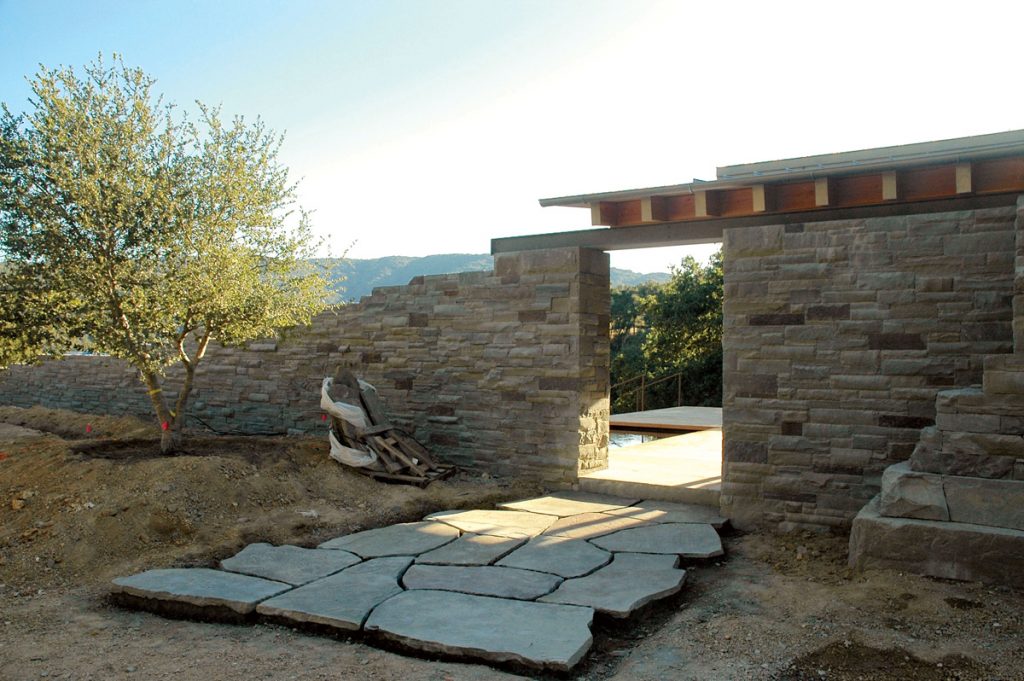 This article originally appeared in the Spring 2015 issue of Building Stone Magazine. 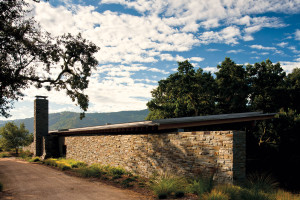 When a trained architect was looking for a beautiful landscape on the West Coast to build a vacation home for his family, he looked no further than the Santa Lucia Preserve. The site, previously a historic cattle ranch, is now a sprawling 20,000-acre private preserve located in California’s coastal mountains, which is home to 300 private residences and high-end amenities.

The rugged and pristine site has a rolling topography and panoramic views of the Santa Lucia Mountains and the Los Padres National Forest— making it the ideal location for a vacation home, according to Greg Mottola, FAIA, principal of Bohlin Cywinski Jackson in San Francisco.

“We began working on this project in 2005,” said Mottola. “Our client had seen a number of our previous projects and admired how we incorporated stone, and was inspired to design a compound of buildings that featured stone prominently in the design.” This building was the first of several phases that incorporated stone in a meaningful and rich way.

“Our client grew up in the East and went to school at Cornell University,” Mottola continued. “Their campus has a lot of remarkable stone buildings, which he appreciated, and wanted to make a family retreat that celebrated the material.” 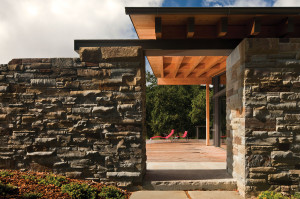 The wall cladding, composed of a unique type of Bluestone known as Llenroc stone, was used extensively for the exterior and interior of the home. Thousands of these stones were placed by hand to create the massive wall that frames the entire house and backyard, which relays a rugged texture since the stones are sporadically placed. Photo ©Nic Lehoux Architectural Photography.

The master plan for this vacation retreat involves three buildings that relate to the site’s ridge-top setting, each anchored to the land with a series of massive Bluestone walls and fireplace chimneys, marking the passage along the ridge and culminating in a stone court at the future main residence.

“The site is remarkable where it sits —on a ridge overlooking the Santa Lucia Mountains with rolling topography,” Mottola explained. “When you enter the site, you arrive on the ridge and don’t see the whole site at first; you see it as you continue to ride in. The plan is for three structures — a guest house, main house and barn structure — utilizing stone walls to help mark progression across the site. All structures will have strong vertical stone chimneys that become landscape markers.”

The first building constructed onsite is a 1,500-square-foot guest house which flanks the winding entry drive and is anchored to the sloping site with a massive stone wall that blocks the house and pool from the surrounding sights. A simple timber-framed shed roof springs from the stone wall, supporting naturally weathered zinc roofing over cedar-clad volumes.

A little over 3,000 square feet of Bluestone wall cladding and 800 square feet of Bluestone paving were used for the interior and exterior of the home, supplied by the Finger Lakes Stone Co. Inc. in Ithaca, NY. “The wall cladding is Llenroc stone, which is ‘Cornell’ spelled backward — something the Finger Lakes Stone Co., Inc. cleverly took into account when developing the name of the locally quarried stone,” said Mottola. “It is the Bluestone that has been traditionally used on Cornell’s campus and [which] exhibits that mix of blue-gray and rust color.”

The paving stone was Pennsylvania Bluestone. “The Bluestone flooring is in a linear path that runs adjacent to the stone wall; it marks the end of the pool and entrance, and the circulation hallway down the house,” explained the architect. “Once you step off of that path, you’re onto a wood floor. There are also notable boulders onsite that we used for benches and lintels, but the main design feature of the project was the Bluestone.”

SEARCHING FOR THE PERFECT STONE 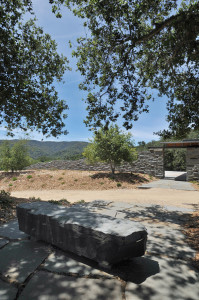 Pennsylvania Bluestone boulders onsite were used for other features such as benches and lintels. Photo ©Nic Lehoux Architectural Photography.

Mottola and his team ultimately found their stone on the East Coast. “We looked in Montana and Wyoming first, but ended up at a quarry in Upstate New York,” he said. “[Finger Lakes Stone Co.] supplies a lot of stone to Cornell University, and they were able to supply the wall cladding as well as larger stones, thresholds, and lintels. They also supplied the stone flooring. We used natural cleft on the exterior and a thermal finish on the interior.

“We have used a lot of Bluestone in the past — there was a home our client liked that we completed in Pennsylvania for which we used reclaimed Bluestone,” explained Mottola. “It had a beautiful quality, and we wanted to achieve the same kind of appearance for this project, but weren’t able to find a source. Ultimately, the client’s connection to Cornell and the location of the quarry was a good connection.”

Since the homeowner was also trained as an architect, it was a collaborative project. “He understood how to read drawings, so it was a nice back and forth with him,” Mottola said.

Although the most challenging aspect of the project was the stone selection process, the distance between the architectural firm and site was also an obstacle. “When you’re working on a project that’s not really far away — but not a 10 minute drive — you have to be able to communicate well with the contractor and stonemason,” he said,. “We made a fair number of site visits during construction. We relied on field visits, so then we would sketch things out.” 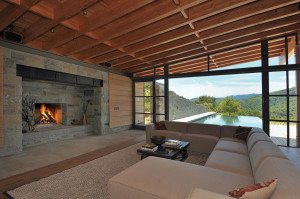 The Bluestone that frames the fireplaces is more toned down, with less texture and a thermal finish. Photo ©Nic Lehoux Architectural Photography.

When it came to the installation — which was completed by an independent, fourth-generation stonemason and craftsman, Jamey DeMaria of Jamey DeMaria Masonry in Carmel, CA — there was an entire other set of design hurdles to overcome. One involved a main design feature of the home — a massive Bluestone wall that frames the residence and blocks it from the surrounding views.

“The general contractor found a stonemason who could really pull off what we were trying to achieve,” said Mottola. “It required an artistic eye. The wall looks like it was there before we started to build.”

The wall was one of DeMaria’s favorite parts of the project. “I liked the concept of the wall,” he said. “It was a great way to get started. We began the wall with large boulders in key locations. They grew out of the ground and worked their way into the wall we built. At the tops of the wall, instead of terminating them with a straight top cap, we let it sort of crumble away and work its way down to look like it sort of eroded over time. 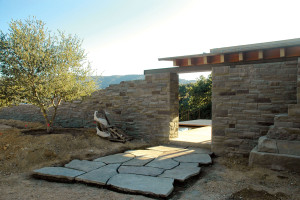 When constructing the home, installers pieced together a little more than two dozen pieces of large-format Bluestone flagstone paving at the entry of the home to create a one-of-a-kind walkway. Photo courtesy of Bohlin Cywinski Jackson.

“The Bluestone we used was rather unique,” DeMaria continued. “It created a very interesting look that was different from the other Bluestone jobs I’ve done. The color combination and the sizing combination worked very well together.”

Although Mottola’s office was about a three-hour drive from the project site, he and his team were onsite often to ensure that everything ran smoothly during the 18-month construction of the home. “We were there every two to three weeks, and it was a very fun project to work on.”

DeMaria said the home is one of the more interesting designs he’s been involved with. “It was an interesting job, starting with the early design process,” he said. “Working with Peter Bohlin and Greg Mottola has been a treat. I respect their design and vision. They came to the site early on and discussed the overall concept. I got a good sense of what they were trying to achieve. I took the vision and did my best to turn it into a reality. I think we created something very special.”