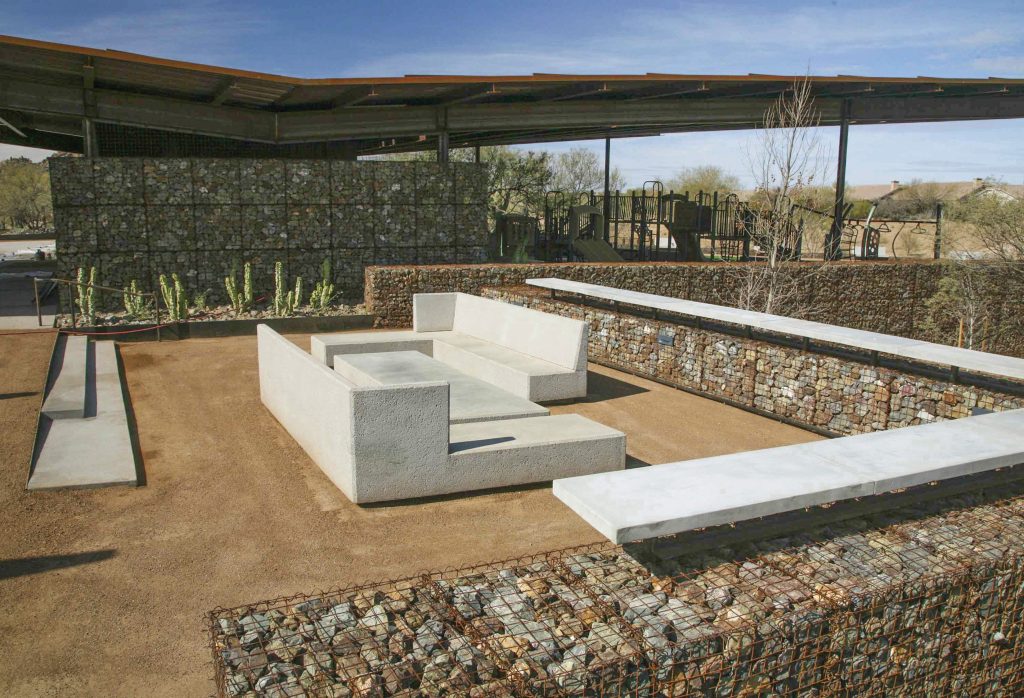 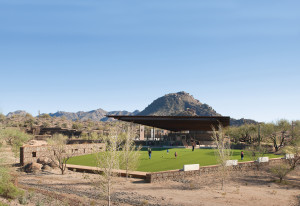 Native stone and the desert landscape were significant influences for the design of George “Doc” Cavalliere Park in Scottsdale, AZ. Choosing regional dolomite as a primary building material was crucial to fulfilling the design’s commitment to honoring the site’s natural desert resources, while simultaneously developing a sustainable modern aesthetic. 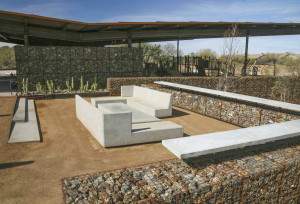 “Preserving open space, respecting existing neighborhoods, and creating a demonstration project for sustainability were the primary guiding principles in the design of George ‘Doc’ Cavalliere Park,” explained Christopher Brown, FASLA, LEED BD+C of Floor Associates, Inc. “The resulting project has established a new standard for the design and implementation of a truly sustainable public park within a sensitive desert context.”

Approximately one-third of the site (10 acres) had been highly disturbed from the construction of a regional drainage facility. “The rest of the site was relatively undisturbed desert, including most of the upper slopes,” Brown said. “All existing mature trees and cacti within the project’s area of disturbance were either protected in place or transplanted to other areas of the site, and all disturbed areas within the area of construction were planted using native materials to create a seamless transition between the natural desert and zones of revegetation.”

According to Brown, “The extensive use of native stone not only celebrates the site’s natural aesthetic, but is also a primary element in the site’s overall sustainability.” The project’s simple material palette consists almost entirely of natural stone, concrete, and steel. “This complements the modern aesthetic of the design and blends into the site’s subtle desert environs,” said Brown. 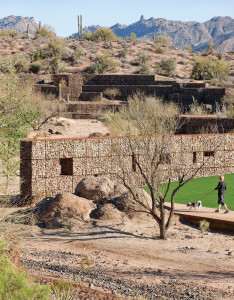 “The resulting project has established a new standard for the design and implementation of a truly sustainable public park within a sensitive desert context,”
said the landscape architect.
Photo Credit: Bill Timmerman

To maintain a native materiality, the design team wanted to use a type of stone that was found onsite. “Samples were collected and matching stone was sourced from a local quarry,” Brown said. “This allowed the design to both blend into the existing site and celebrate the inherent beauty of the material by showcasing its use into the manmade elements of the design.”

Express Brown dolomite was quarried by Granite Express, approximately 40 miles from the park. The angular native stone was hand-placed into custom-designed gabion structures and situated to blend into the desert surroundings. The stone is prominently featured throughout the park’s design, including the central restroom facility, seat walls, and the stairways leading from the main facility to the nature trail.

Custom-designed gabion structures were chosen for the park’s design because they blend into the appearance of the existing desert and derive their aesthetic value from an underlying practical concern. “As designers, we felt that the gabions offered several advantages over more traditional retaining wall solutions including appearance, local materiality, permeability, and simplicity,” Brown explained. “By incorporating the gabions and filling them with local stone, the goal of blending the required engineering into the color and texture of the adjacent natural desert landscape was accomplished. By their very nature, the gabions are permeable to surface drainage, which eliminates the need for draining pipes and structures that are often required behind solid retaining wall systems. Because of the dead weight mass, gabions can be installed directly on top of compacted subgrade without the need for concrete footings. This greatly simplifies the installation and overall cost of the system.” 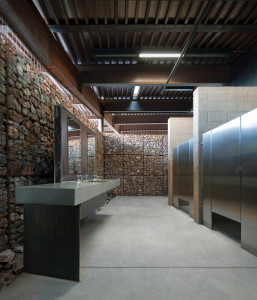 The stone is prominently featured throughout the park’s design, including the central restroom facility.
Photo Credit: Bill Timmerman

According to Brown, “In order to accomplish a consistent finished look throughout, the stone needed to be hand-placed into each of the gabions, which required extensive time and expertise. All site elements were custom designed, and the various gabion installations required close coordination between the landscape architect, structural engineer, architect, and contractor to accomplish the design goals.”

The design process for George “Doc” Cavalliere Park was a two-year period, and construction was completed in 18 months. “The project consisted almost entirely of custom details, which required extensive on-site supervision by the design team throughout the duration of construction,” said Brown. 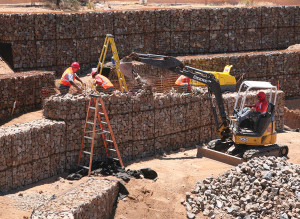 The stone pieces were hand-placed into each of the more than 4,000 gabions to maintain a consistent aesthetic throughout the park’s design.

Since its completion, the project has been highly recognized and has received a series of both local and national awards for sustainability and design excellence, including the first sustainable SITES certification in Arizona, the AzASLA President’s Award, and AIA Honor Awards. The park is well used and highly appreciated by residents and visitors alike, making a significant quality of life contribution to the community.