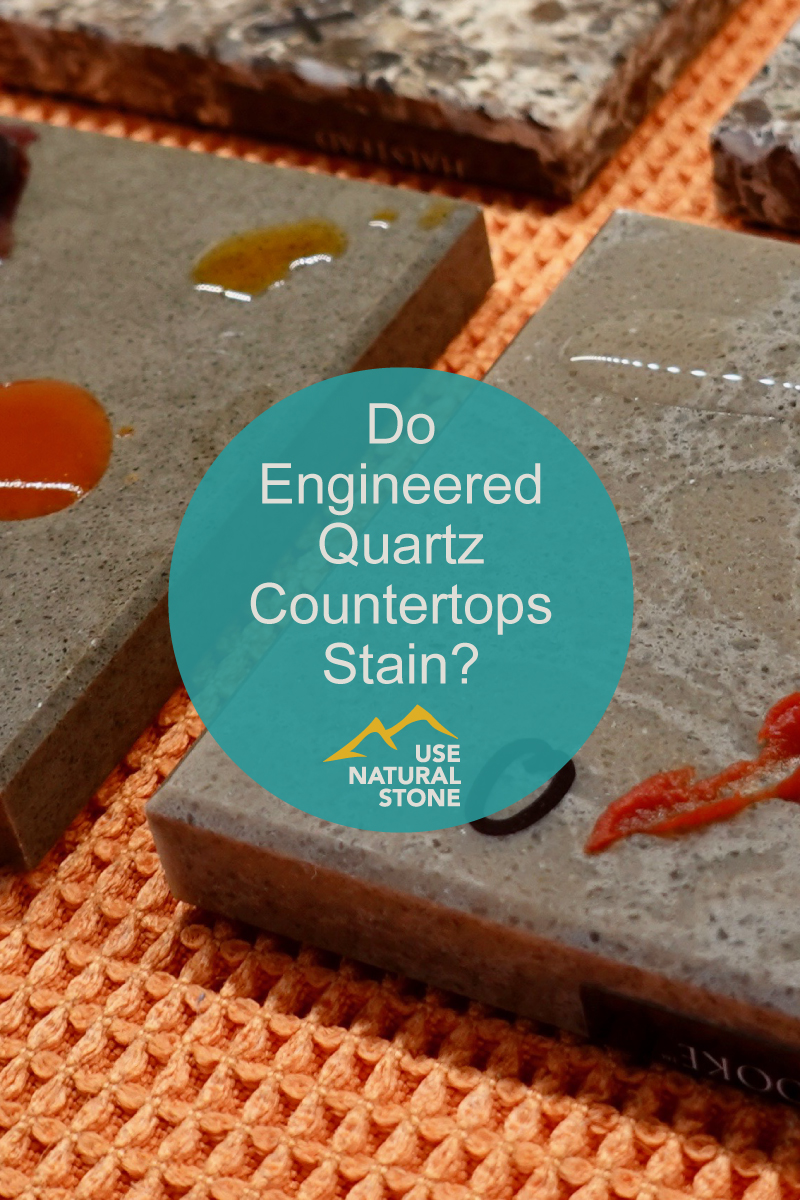 The websites and social media pages of major quartz brands are full of bold statements: their products are “completely maintenance free” or offer “care-free maintenance.” Dig deeper and you’ll find detailed advice on stain removal and warnings to avoid strong cleaners and abrasives of any kind.

One well-known brand of engineered quartz advises: “All you need to do is wipe it down with a little warm water and mild soap.” This sounds appealing, but warrants a closer look to see how these products hold up to both staining and cleaning. Regardless of what type of surface one uses, upkeep will be a part of life with any surface—although if someone does invent a self-cleaning countertop, please do let me know!

It’s true that engineered quartz products are resistant to staining. However, they are not immune to staining, and in most cases, when they do stain, it presents a dilemma. Mild cleaners are insufficient to remove tough stains, and harsher cleaners or scrubbing pads have the potential to damage the surface. To sort out the details, I did several rounds of testing with various staining agents, cleaners, sponges, and scrubbers.

I tested five major brands: Caesarstone, Cambria, PentalQuartz, Silestone Nebula, and Viatera. Within each brand are several different product lines, surface finishes, and a vast array of colors and patterns. It’s not practical to test every possible combination. To simplify things, I only tested polished samples, and I performed each test on a subset of brands and colors. 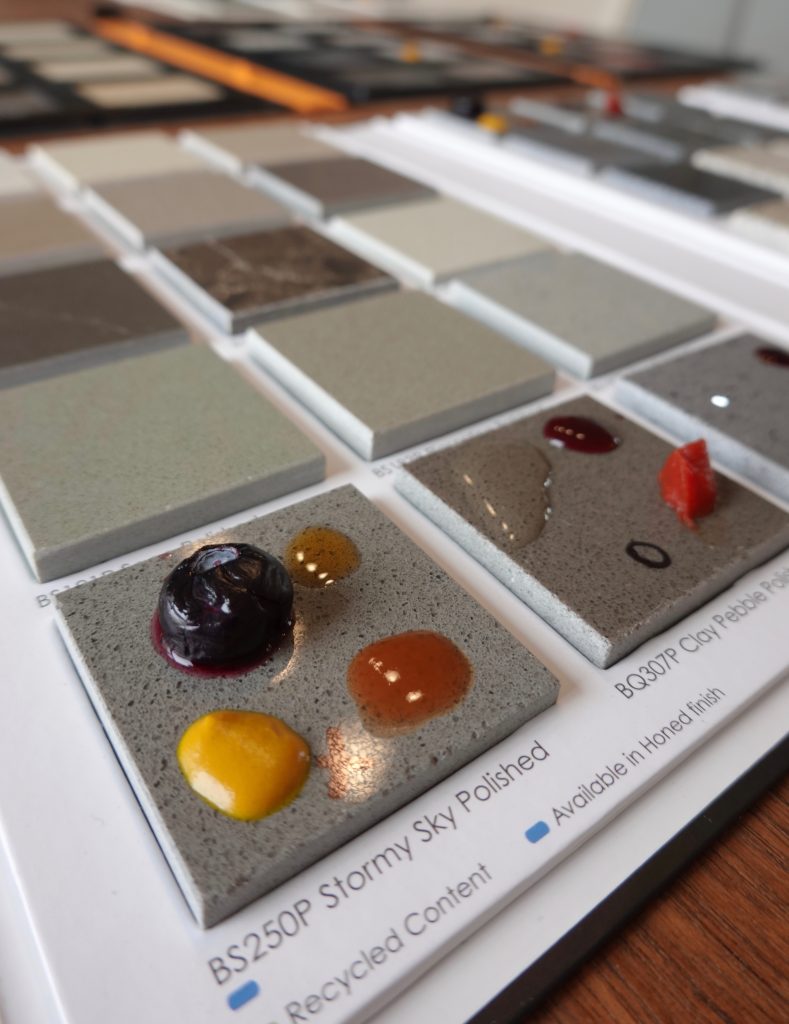 Five brands of quartz and hundreds of tests of staining, cleaning, and scrubbing.

Manufactured quartz is marketed as stain resistant, but what does that really mean? There is no ASTM standard for testing the stain resistance of quartz surfacing, so I used a method that replicates real-world conditions. I put a variety of common household substances on samples of quartz and let them sit for two hours. Then I cleaned them off using the methods described on the quartz company websites: a little warm water and mild soap. Among the five brands, I tested the potential for staining on 45 different colors and patterns.

Details of “a little warm water and mild soap”:

105° water, approximately 1/8 teaspoon of Bio Pac liquid soap, a Scotch-Brite non-scratch scrub sponge (both the scrub side and non-scrub side were used), and a standard cotton kitchen towel 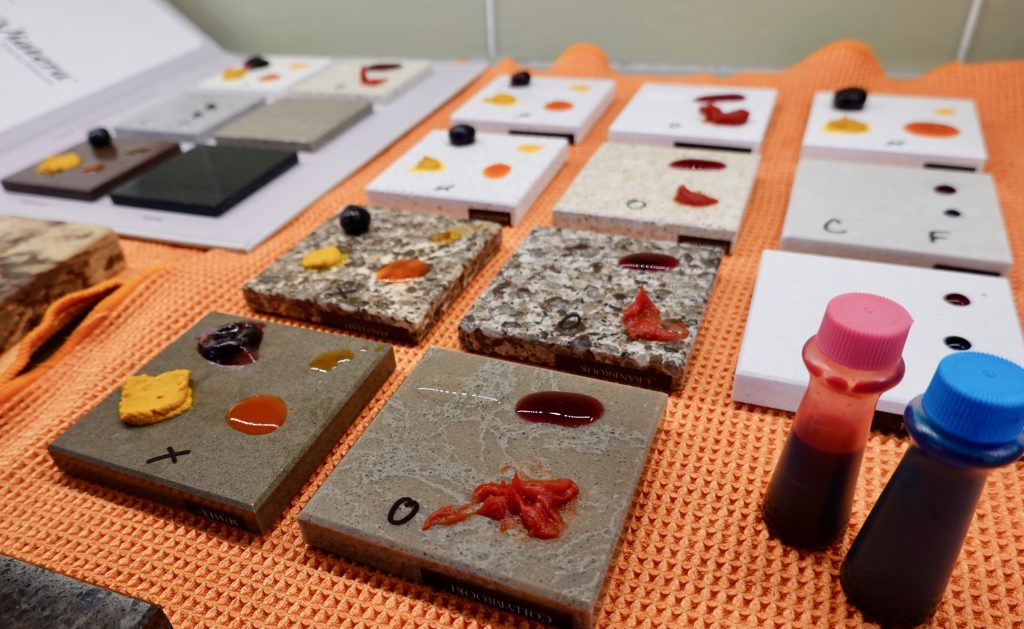 Food coloring was among the most pervasive staining agents. 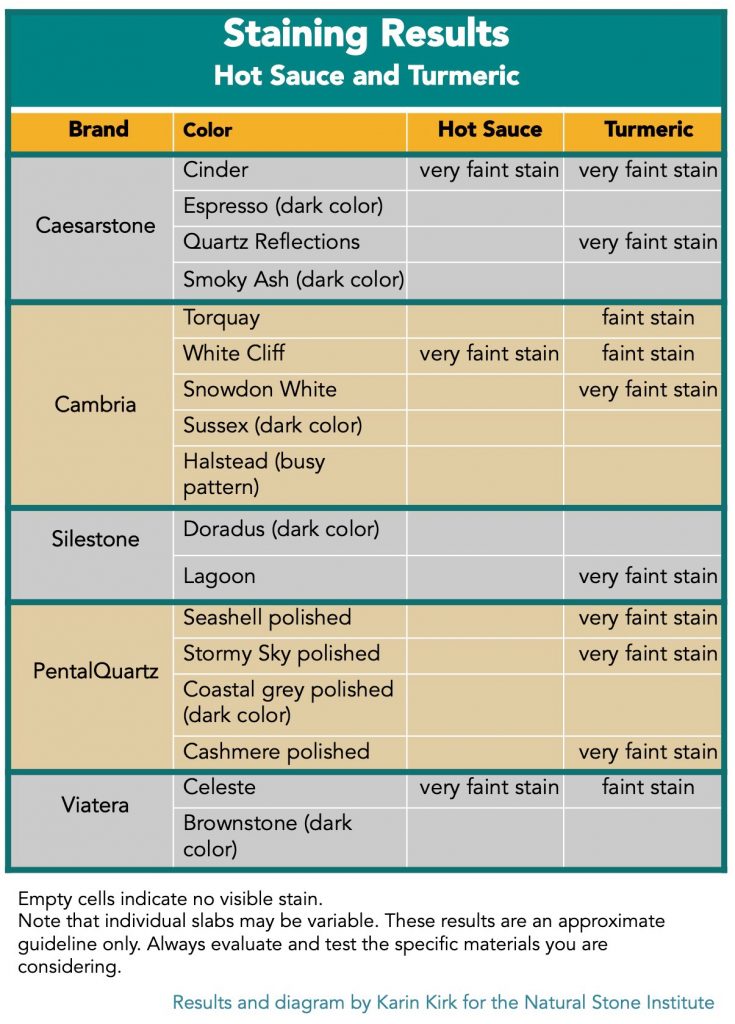 Hot Sauce left a stain on three of the 17 samples. Caesarstone Cinder, Cambria White Cliff, and Viatera Celeste each had a slight, subtle stain from the hot sauce. The other 14 samples showed no visible effects. A paste of turmeric and water left a stain on most of the quartz samples. Of the 17 samples tested, ten showed a stain. All of the colors that did not stain were dark colors or patterns that likely made the stain less visible. The turmeric stains were either faint or very faint. 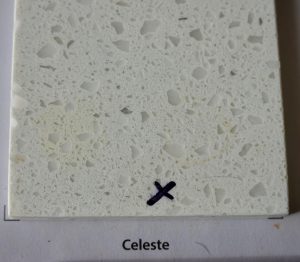 On the left side, turmeric left a faint stain on Viatera Celeste. On the right side is a very faint stain from hot sauce.

Cambria White Cliff with a faint turmeric stain (left side) and a very faint hot sauce stain (right side).

Food dye left a stain on most of the samples. Of the 19 different colors tested, the only ones that did not show some staining were the dark colored pieces. The most noticeable stains were on Caesarstone Marrone, Caesarstone Nougat, and Cambria Coswell Cream, Newport, and Whitehall. 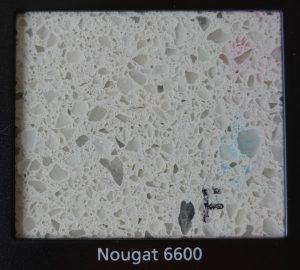 Caesarstone Nougat with moderate stains from pink (upper right) and blue (lower right) food coloring. There is also the remnant of the letter F written in permanent marker. 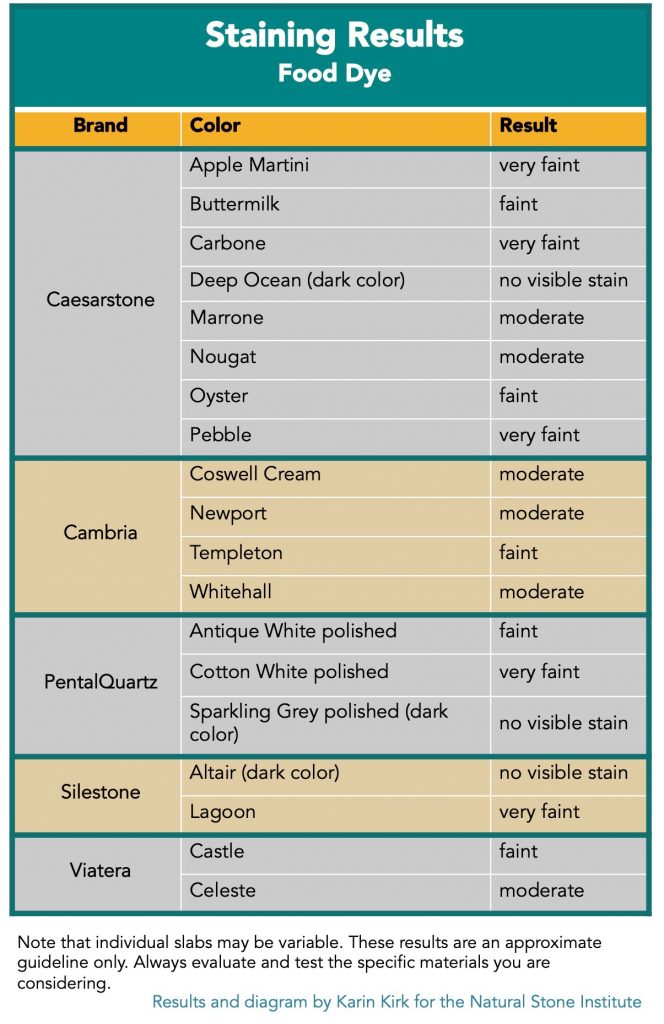 Permanent marker left an obvious stain on every sample tested. The stain lightened somewhat with cleaning, but it was still prominent.

Engineered quartz surfaces are stain resistant, but not stain proof. Food coloring, turmeric, and permanent marker were the most likely substances to leave lasting stains, even after a thorough cleaning and wiping of the surface. As you’d expect, darker colors and busy patterns made stains less visible or invisible.

There was no apparent trend within the five brands tested—every brand was stainable. Aside from permanent marker, the most significant stains were with food dye on some of the Caesarstone and Cambria samples.

For the next series of tests, I used various cleaners and sponges to see if scrubbing or different types of cleaning products would damage the finish of engineered quartz samples. As I described in my previous article about manufactured quartz, there is a substantial hardness difference between the actual mineral quartz particles in these products and the polyester resin that binds the particles together. The mineral component of engineered quartz is harder than most abrasive cleaning products, but the resin is not.

Nonetheless, I did not treat the samples in an unreasonable or abusive way. I just imagined that my mother-in-law was on her way over, and I scrubbed intently.

I used the following methods, arranged from most abrasive to least: 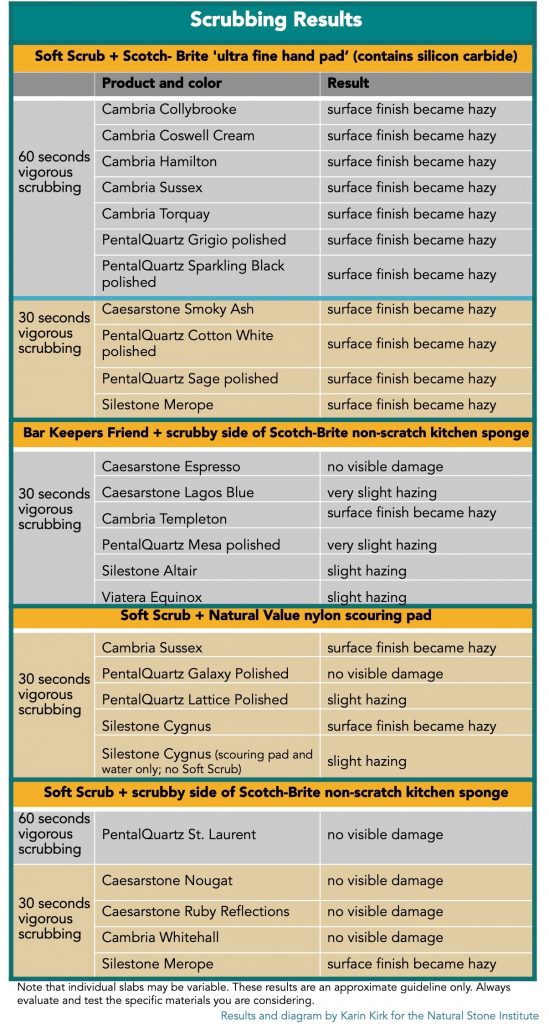 The Scotch-Brite “Ultra Fine Hand Pad” damaged the finish of every brand and every sample.
After scrubbing with this heavy-duty scouring pad, an obvious hazy area was evident on every sample, regardless of whether the sample was scrubbed for 30 or 60 seconds. This scouring pad contains silicon carbide, which has a Mohs hardness of 9. This type of abrasive pad should not be used on any synthetic quartz—nor any countertop surface, for that matter. 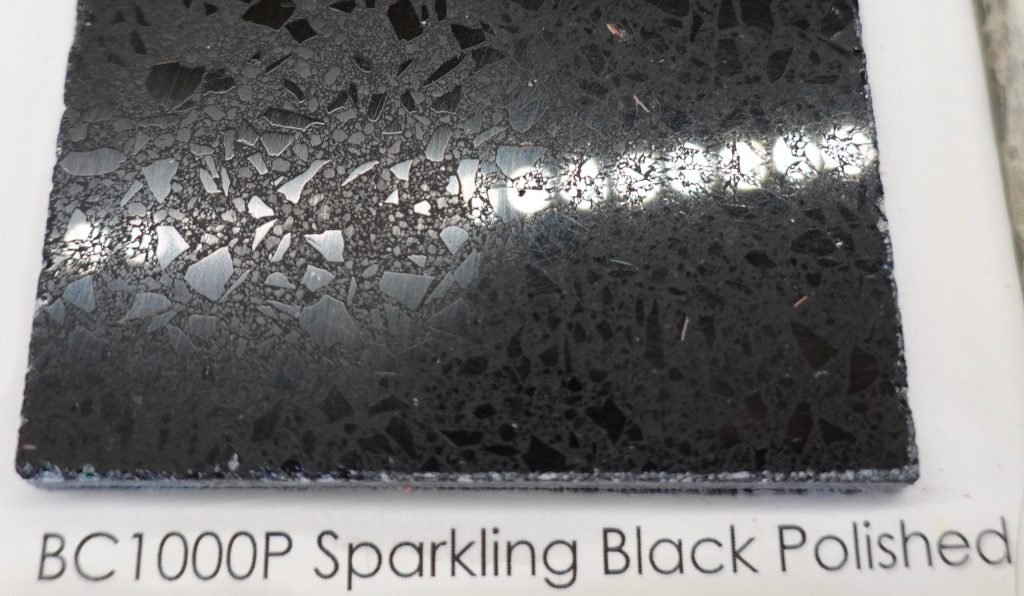 A Scotch-Brite abrasive hand pad damaged every sample, and is much too aggressive to use on any countertop. The left side of this sample was scrubbed, and is clearly damaged. Note how the quartz particles are unaffected while the filler around them is abraded. This illustrates the hardness difference between the mineral quartz grains and polyester resin filler.

Five of the six samples scrubbed with Bar Keepers Friend showed some hazing or dulling of the polished surface. The worst effects were on Cambria Templeton, which became distinctly dulled where it was scrubbed. Four other samples showed minor amounts of dulling, and Caesarstone Espresso showed no visible damage. 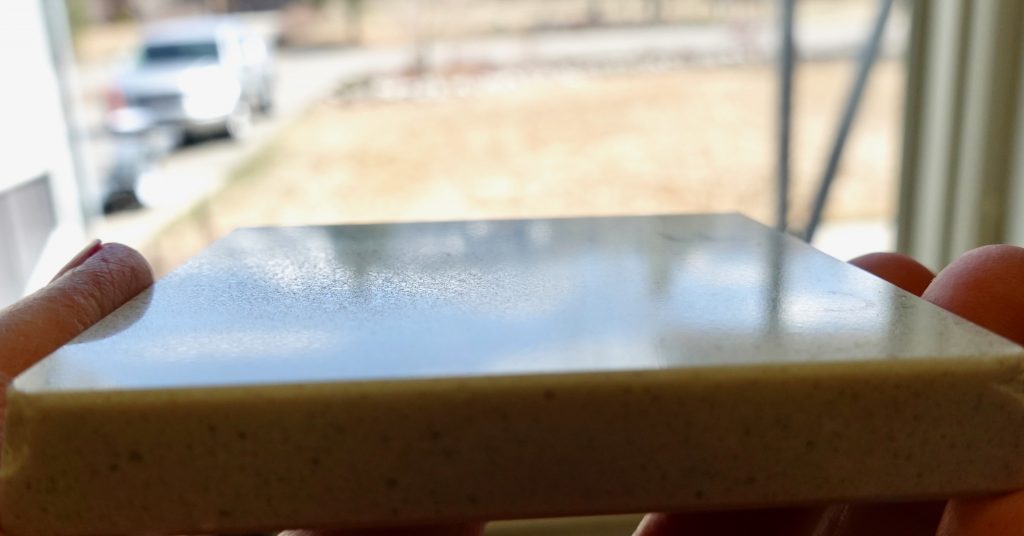 The Bar Keepers Friend website offers advice for using their product with engineered quartz: “The key is to minimize contact time and not over-concentrate the product in a small area.” The website also suggests using Bar Keepers Friend for stain removal, rather than general purpose cleaning. That recommendation is supported by the results I found, as it appears that Bar Keepers Friend is likely to damage quartz surfaces.

Similarly, the Caesarstone website cautions homeowners against vigorous scrubbing with Bar Keepers Friend, advising use of only a small amount, with light pressure, and to not use a scouring pad. Again, that appears to be sound advice. However, the light touch needed to prevent damage may not be sufficient to remove a stubborn stain.

A kitchen sponge and Soft Scrub mostly had no effect, except on one brand.
Soft Scrub uses calcium carbonate as its abrasive material, which has a Mohs hardness of 3. Calcium carbonate is also known as calcite, which is the mineral that makes up limestone, marble, travertine, and onyx. Soft Scrub is well named, because it is indeed softer than other abrasive cleaners. The combination of Soft Scrub and the scrubby side of a Scotch-Brite non-scratch kitchen sponge did not damage most of the quartz samples I tested.
The one exception was Silestone Merope, which was visibly dulled after scrubbing for 30 seconds with Soft Scrub and the sponge. 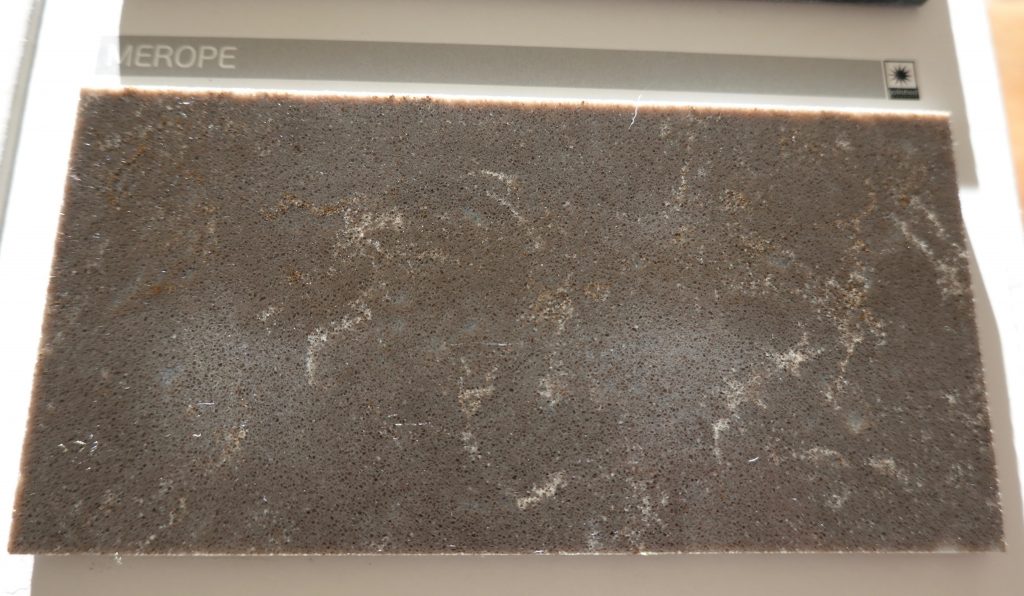 Engineered quartz surfaces are made of two basic things: particles of mineral quartz and resin binders. The mineral components of manufactured quartz slabs are hard and resistant to damage from abrasives. But the resin binders are much softer, and as much as 25% or more of the surface area of an engineered quartz slab is made of resin, not mineral quartz. (For more details on this, see my previous quartz article.) When you look closely at how an abrasive cleaner damages a manufactured quartz surface, you can see that the resin gets scoured away, while the mineral grains are left intact. The result is an uneven and dull finish. An important takeaway is that even though the majority of an engineered quartz surface is made up of minerals, it’s the fillers and binders in between the minerals that are likely to be less durable over time.

The third round of testing aimed to find out which happened first: removal of stains or damage to the surface. I experimented with a variety of cleaning approaches to see what worked.

Food dye stains
Stains from food dye were unresponsive to scrubbing, so I moved on to other methods. Some quartz manufacturers advise against using bleach, while others recommend it. Thus, bleach seemed like a worthwhile cleaner to test—in the name of science, of course.

I used a small amount of undiluted bleach and the scrubby side of a Scotch-Brite kitchen sponge. This lightened the stains in all cases, but didn’t remove them completely. Interestingly, the stains faded overnight and were less visible the next morning. In one case, with Viatera Celeste, the stain was completely invisible the next day. On the other samples, the stains were very faint the next day. This is consistent with information on the Silestone website, which says that bleach can continue to affect their products for 12 hours after application.

Nail polish remover didn’t noticeably lighten the food dye stains. All in all, these stains were the most persistent and difficult to remove.

Engineered quartz is more tolerant of chemical cleaning than physical cleaning.
Cleaning can be thought of as either a mechanical process or a chemical one. Scrubbing action and abrasive materials do their jobs by physically scraping the stains away. The quartz manufacturers’ warnings are correct. Using abrasive cleaners or scouring pads will likely remove the softer portions of the material—the polyester resin binder. Thus, one needs to weigh the need to remove a stain with the likelihood for damaging the surface.

Bleach and nail polish remover work because of their chemistry. That is, they dissolve or react with the stain to make it rinse away or fade to the point where it becomes invisible. These methods worked better than abrasives and did not appear to impact the samples. But in the case of food dye, even full strength bleach still wasn’t always successful in completely cleaning the surface.

Even though this was a fairly extensive test, I didn’t try every combination of staining and cleaning on every color—that would be an enormous project. Furthermore, there are numerous variables that are not practical to control. Slabs vary from batch to batch. Colors and patterns change over time. What some users might call “vigorous” scrubbing, others might consider over-the-top. There are many brands of sponges and scrubbers, and several variants of a given type of cleaner.

These tests offer a general idea of how engineered quartz products hold up, but far and away the best thing to do is test the materials that are relevant to you.

As always, the more you learn, the better. Every surface material has its limitations, no matter if it’s natural or synthetic, common or rare, expensive or economical. If a sales pitch sounds too good to be true, it probably is. While boastful claims make for a compelling marketing narrative, customers are wise to double check and look deeper whenever possible.

In practicality, no material is literally maintenance-free. Every surface, including engineered quartz and natural stones like granite, marble, and quartzite, need to be cared for in a manner that is compatible with its properties. The trick is to understand the properties and be an informed consumer. Just as I advise a science-based approach to shopping for natural stone, I encourage the same curiosity when considering other types of materials, too. 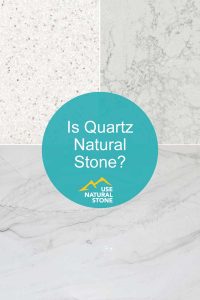 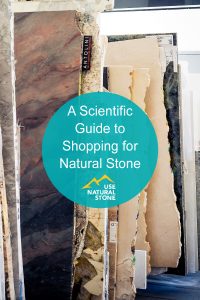 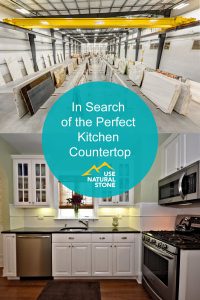