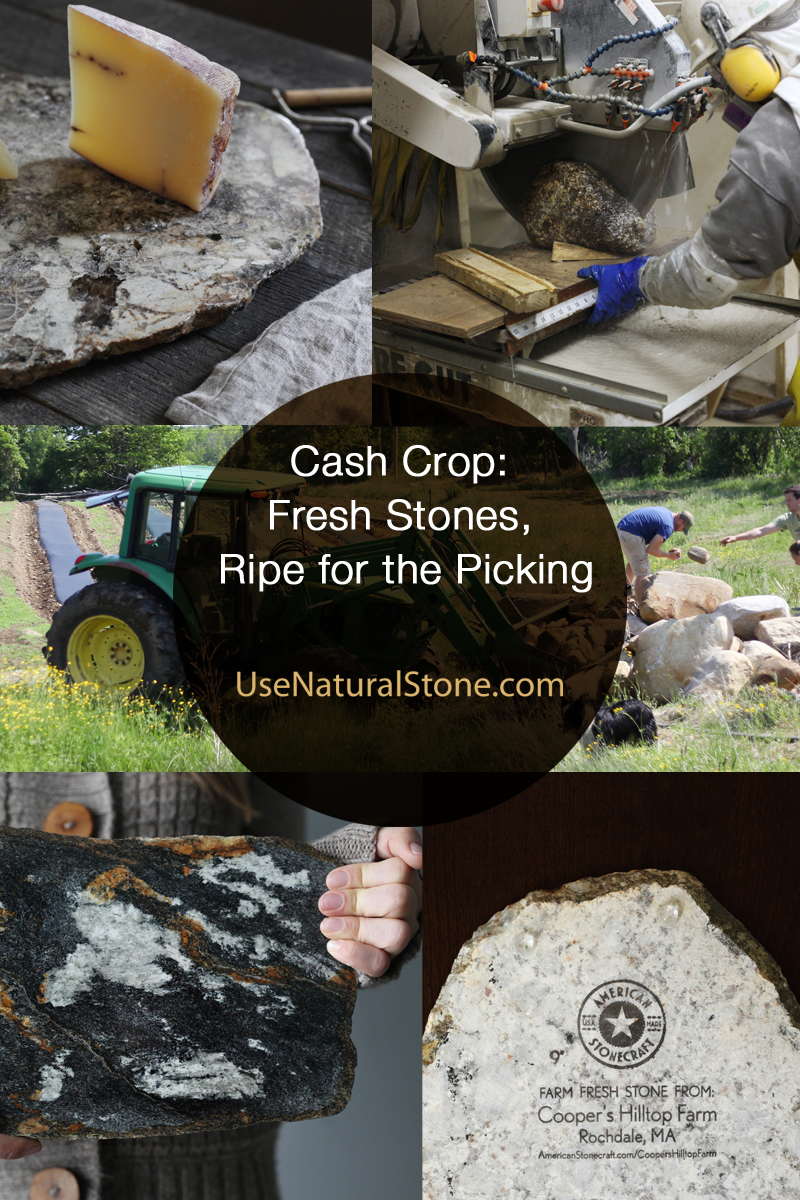 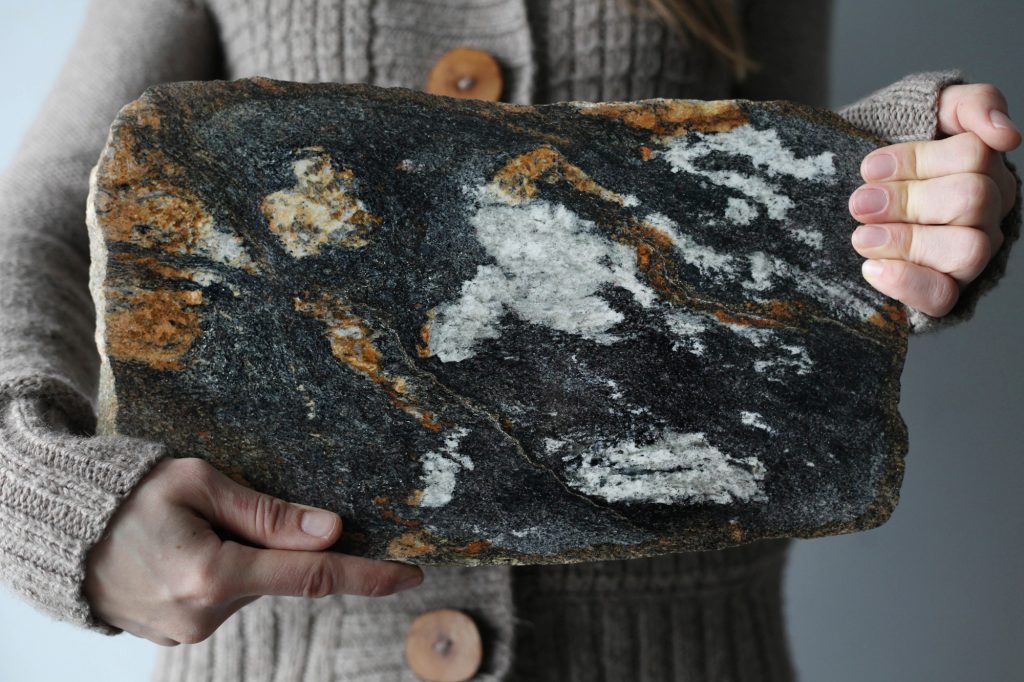 For one man, rocks have become a cash crop. Gerald Croteau grew up around the stone walls that are so popular on farms throughout the Northeast. He claims there are more miles of stone walls in New England than miles between the Earth to the moon. While farmers harvest produce or let their animals graze on the fields, Croteau and his team are busy searching for field stones, ripe for the picking, to make into food slabs, bowls, and coasters.

Stone walls are a pretty distinct piece of New England’s landscape. Even Robert Frost wrote about them in his poem “Mending Wall.”

While glaciers left small and large boulders scattered throughout the topsoil many years ago, it’s the freeze-thaw cycle of winter seasons that perpetually pushes stones back up. The work of clearing stones from the land is never-ending. 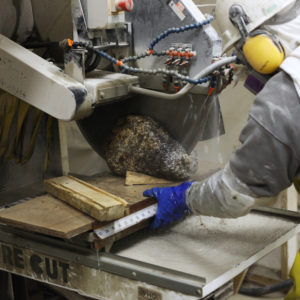 Croteau’s grandfather was a stone mason and while he was always fascinated by stone walls, he never realized the beauty within them. That is, until he visited some families while working abroad and saw the inside of field stone for the first time. He discovered that while these incredible metamorphic stunning boulders were grey on the outside, they were colorful and vibrant inside.

It was then that he realized this would be a great business opportunity, in which he could use his economics experience and education. “I started American Stonecraft to work with farms to add value to these ordinary rocks,” he says.

American Stonecraft is based in Lowell, Massachusetts, and currently partners with about 75 farms all over New England to pick ordinary-looking stones and boulders which will then be transformed into a line of slabs for serving, cooking, coasters, and other tabletop accessories. Croteau and his team have developed a keen eye for the kind of stones and boulders that might have beautiful patterns within them. They pick the rocks, haul them to their workshop where machines help craft them into pieces of functional, food-safe products that the farmers and other retailers across the country can sell. 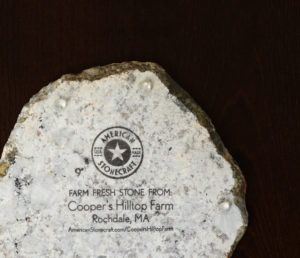 Each finished product shows information about the farm where the stone originated.

The irony of growing rocks on precious farmland isn’t lost on Croteau, or the farmers with whom he works to cultivate his crop.

“In our store at Boston Public Market, our tag line hangs on a sign that says: ‘From a land that grows rock comes the story of farmers who battle them.’ If you ask farmers across the board here in New England, they do joke about it,” admits Croteau.

New England farmers have been battling rocks on their land for generations. Like all farmers, they’ve learned to diversify their offerings in order to maximize the return on their investment. New England farms tend to be smaller in size compared to what most people might think. They’re not the thousands of acres of land that grow corn in the Midwest. As a result, they’re often vertically integrated, meaning they not only produce crops, they also sell them, usually at farmers markets. Selling American Stonecraft products, created from stones collected from their own land, allows farmers to not only add to their merchandising mix, but to extend their selling cycle.

Farmers are rarely ever not busy, but during the winter months, outdoor vegetable production is over and harvest time has ended. American Stonecraft products, though, are not only year-round, they sell particularly well during the holiday season when people are looking for unique gifts with a story. 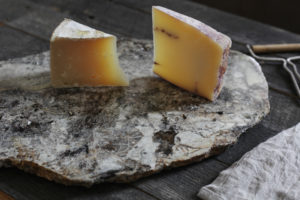 And Croteau has plenty of stories. The first farm he began working with is called Ugly Udder Farm. The stone from the farm is used to make their most popular product in the line: a food slab.

To hear Croteau tell the story, Ugly Udder Farm acquired the name after a farmer began rescuing goats that a breeder didn’t want because their udders weren’t pretty. She was making cheese and soaps from goat’s milk and since all of her goats had “ugly” udders, she named her farm after her goat’s ugly udders.

“To me that just sums it up,” laughs Croteau. “It’s all about telling stories and being memorable and I think she just did a really good job with that.”

The food slab that was created using stone from her farm comes with a label on the bottom of the product that includes the American Stonecraft label, the farm from where the stone was sourced, and a website link to the farm’s story.

Supporting Farmers and Shopping Their Values

Stone walls and the story behind American Stonecraft’s line of slabs, coasters, and other tabletop accessories appeal to so many people because it reminds them of their own childhood or New England history, according to Croteau. He stays connected to his customers by working at the Boston Public Market, a year-round market with about 40 vendors who sell local produce, fish, and artisanal items, one or two shifts a week. 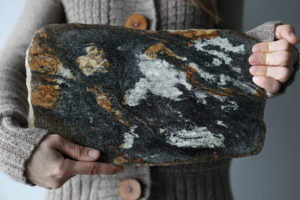 “It’s just a lot of fun to meet people that discover us and have grown up with a stone wall in their backyard, or grown up farming, or just understand this part of our history and then realize how it checks off, they literally say these things, it checks off all the boxes that I have,” Croteau says, in reference to a list of things that touches them.

“People nowadays are such conscious consumers,” he adds. By buying items from American Stonecraft, they feel like they’re supporting the kind of world they want to live in. He has repeat customers who often come back to buy gifts because the products are not only beautiful, unique and one-of-a-kind, but they’re supporting family farms that mean so much to them.