An Innovative Approach to Sourcing Stone 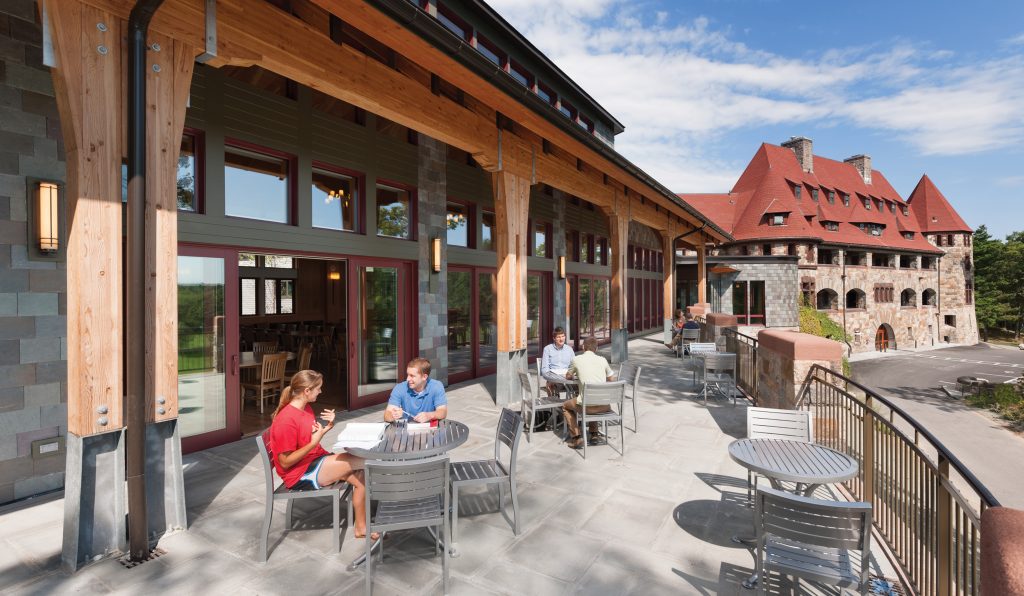 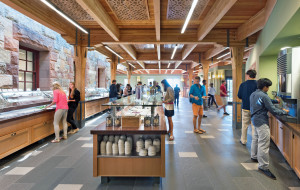 The campus project expanded the castle’s current use by the Noble and Greenough School as a dining facility and faculty apartments — adding 240 new dining seats and an energyefficient servery and open kitchen. Photo Credit: Chuck Choi Architectural Photography

A distinguishing landmark on the campus of the Noble and Greenough School in Dedham, MA, is the solid stone structure that resembles a castle. Originally designed as a private residence by iconic American architect H.H. Richardson in 1886, the Castle is perched on the edge of a rocky escarpment overlooking the Charles River. While the recent restoration and expansion project maintained the aesthetic quality of its exterior stonework, it is the story behind the stone that is most interesting. An extensive search was required to match the existing stone pieces for the new addition to the historic building. Boston-based Architerra Inc. sought the expertise of Kenneth Castellucci & Associates, Inc. of Lincoln, RI, to search for the necessary stone needed for the project. 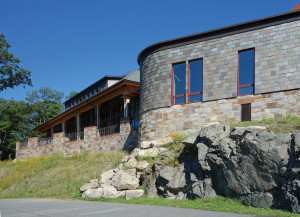 A recent restoration and expansion project at the Noble and Greenough School in Dedham, MA, involved restoring the historic Castle building as well as constructing an addition. An extensive search to match existing stone was led by David Castellucci of Kenneth Castellucci & Associates, Inc., of Lincoln, RI, the stone supplier, fabricator and installer for the project.

“It is a very unusual project,” explained David Castellucci of Kenneth Castellucci & Associates, Inc. “There is so much history from an architectural standpoint and the materials that we were trying to match were no longer available.”

According to Castellucci, the big story with this project was its connection to H.H. Richardson. “This was his last design before he died. He worked with his friend and collaborator Frederick Law Olmsted, considered the father of American Landscape Architecture. When the house was built, he was looking for economical materials for the exterior. It is a wood and steel structural framed building with 2-foot-thick structural stone walls. The prominent inside walls are backed up with brick and faced with buff and brown sandstone.”

The campus project expanded the castle’s current use by the Noble and Greenough School as a dining facility and faculty apartments.

“To visually ground the addition and create aesthetic harmony with the existing building, a battered serpentine-shaped terrace wall was designed, in stone, matching that of the existing 1886 building and its 1920 addition,” said Principal Daniel Bernstein, AIA, LEED BD+C of Architerra Inc. “Boulders salvaged from site excavations were built into the base of the wall to mimic the way that the castle appears to grow from the rocky outcrop on which it was built. Salvaged red sandstone caps top massive stone piers that march along the edge of the Bluestone terrace. Bluestone was also used for the lower level floor at a newly installed elevator vestibule.” 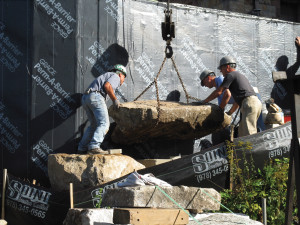 Boulders salvaged from the site excavations were built into the base of a serpentine-shaped terrace wall to mimic the way the castle appears to grow from the rocky outcrop on which it was built. Photo Credit: Architerra Inc.

Completing this project was not an easy task. Richardson had selected Quincy granite for the castle’s original exterior facade. “He tried to find quarries that were local where the stone would be economical,” Castellucci said. “He went to the biggest and best quarry in the area, which was in Quincy, MA.”

The design utilized squares and rectangles of various sizes and colors to create a pattern. Instead of using select uniform architectural grade dimensional stone stock, the design used quarry waste that was full of seams and discolored natural faces in hues of rust/brown/red. The design also required monstrous pieces of stone — some were 20 feet long — to be used as exposed structural beams above the terraces at the third floor roof line. 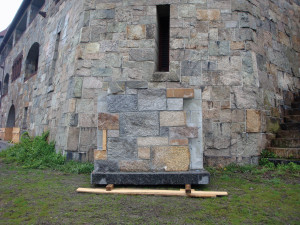 With the various types and colors of stone mock-ups played a key role in the design process. Photo Credit: Architerra Inc.

The quarry in Quincy closed in the 1950s. Castellucci questioned where they would find matching stone for the addition.  “The quarries had been closed for 50 years,” he said. “We thought, ‘Where were we going to get enough Quincy [granite], let alone stone, that was atypical seam-face Quincy?’ We needed a lot of material, at least 150 tons.”

The search for matching stone led Castellucci to a demolition contractor. “There was a demolished train trestle and abutments with vintage stone from the same time period of when the house was built,” he explained. “The demolition contractor took an interest in it. He went to the owners of the property and asked if he could salvage it. He had a huge lot of blocks, good size and well squared because they made buttress walls out of them for the trestle.”

The blocks measured 6 to 8 feet x 2 to 3 feet x 2 to 3 feet, and the best part was that the salvaged stone had a 100-year-old patina. “There was a lot of rust on the outside of the blocks,” he said. “We needed stone that was 4 inches thick, so we took 4 inches off all sides and then split that up. Most of the job was made from repurposed salvaged stone.” 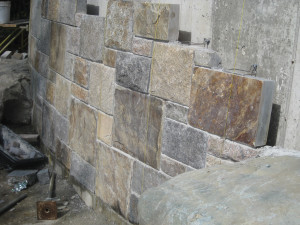 Vermont slate shingles were used as siding on the addition at the “Link” to the existing building.

In addition to Quincy granite, which accounted for 50% of the exterior walls, there was another pinkish-colored stone that was difficult to identify. “When the site excavation for the addition started, I realized that it was the stone from the site,” Castellucci explained. “They had taken a big portion of the stone from the site for the original building.”

According to Castellucci, the original castle was built of five different stone materials. 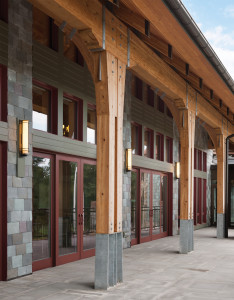 The addition’s exterior was designed to include stone pieces in squares and rectangles of various sizes and colors to create a pattern – reflecting the original castle’s design. Instead of using select uniform architectural grade dimensional stone stock, the design used quarry waste that was full of seams and discolored natural faces in hues of rust/brown/red.

“Some were so obscure,” he said. “Richardson and Olmsted used their favorite general contractor, Norcross Brothers. My family purchased quarries from them. They also owned the reddish brown sandstone quarry that was used as the trim on the original Castle building.” The project needed a greenish/brown stone, which Castellucci was able to find in the storage yard. “We have a lot of stone at our company from the last 40 years working in Rhode Island, Massachusetts, and Connecticut,” said Castellucci.

In the end, eight or nine different stone varieties were used to mimic the look of the original stones. “We had a multi-color of stone pieces mixed in a pattern,” said Castellucci. “We didn’t buy any new stone — nothing was quarried for the job. We repurposed it.” He added that there was a free-standing wall faced both sides with granite from the original building. “We demolished it piece by piece and reused all of the stone. Most of the existing stone was a foot thick, and I only needed 4 inches — for every one piece, we got three.”

The restoration and expansion project at the Noble and Greenough School is a prime example of green building. The entire project — comprising both the total renovation of the castle and the new dining addition — was designed to a LEED Gold standard.

While the new 14,000-square-foot addition nearly doubled the 40,000-square-foot footprint of the Castle, the project results in no increase in overall campus energy use. This was achieved through adding new energy conserving environmental systems, new insulation in the renovation, and high-performance envelope design in the new addition, according to the design team.