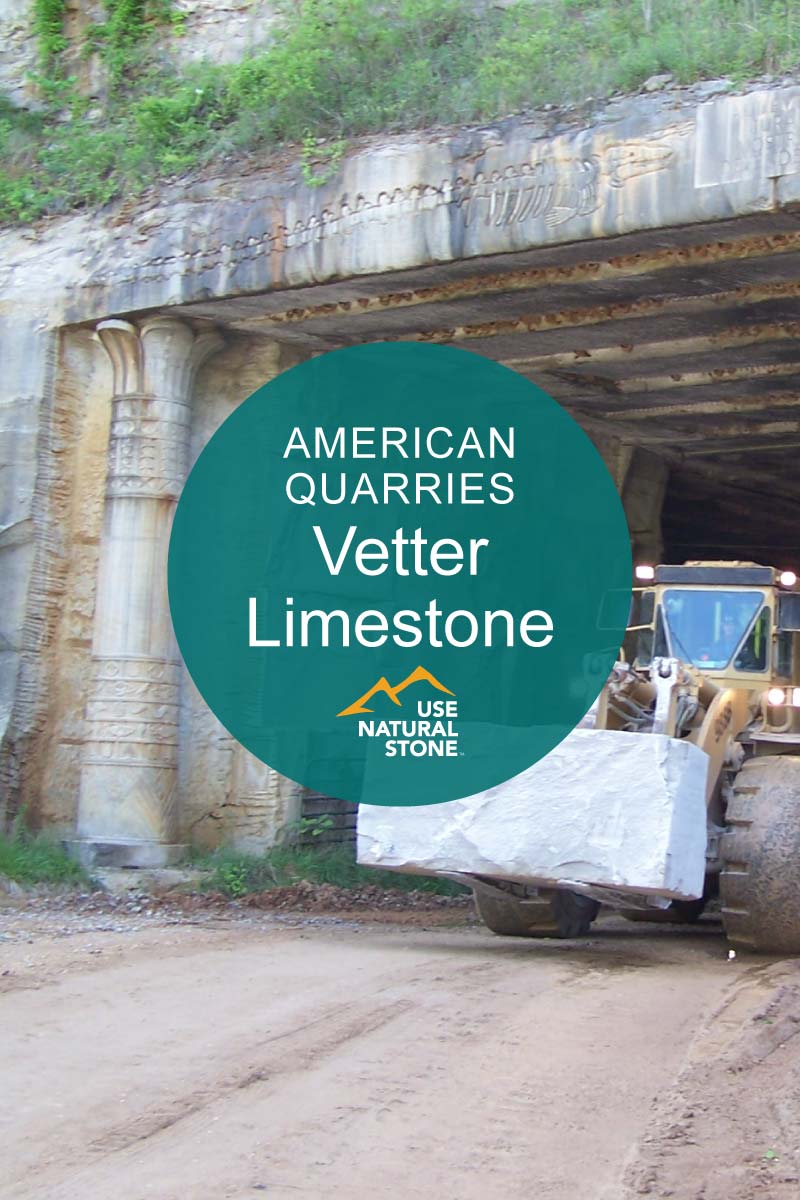 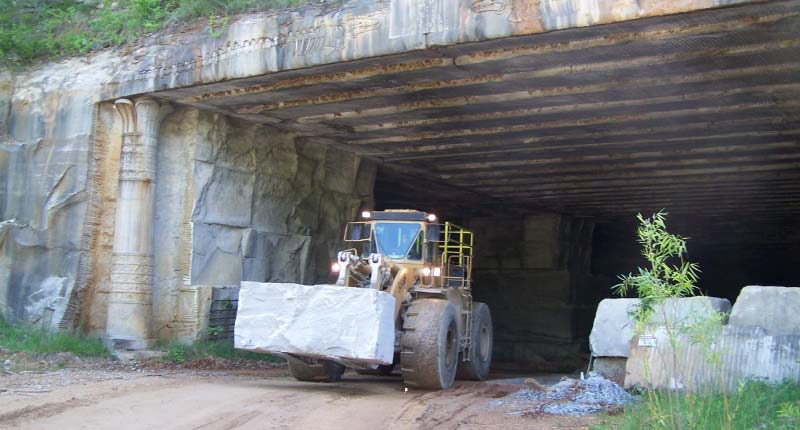 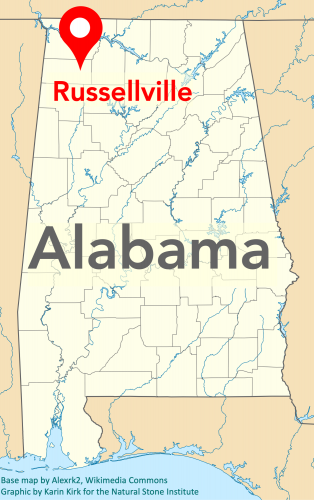 Natural stone is a two-part collaboration. First, the stone is forged by forces of nature. Ancient sea life, adrift in a long-vanished ocean, settled to the seafloor, gradually becoming fused into solid rock from the radiant warmth of the planet. That part of the story is well documented by geology.

But what’s often overlooked is the intensity of human labor required to heft the stone out of the ground and shape it into something useful. These efforts allow the stone to emerge from the earth and attain a second life: as a building stone, monument, fireplace hearth, or garden wall. We celebrate natural materials not only because of nature, but also with gratitude for the human effort that transforms them.

The quarry opened in 1884 as the Rockwood Limestone Company, and in 1956 quarrying moved underground. “It was drills, it was loud, dusty.” Hester recalls that his grandfather would come home from work “just solid white” from limestone dust.

Hester describes how the chronic exposure to noise took its toll on his grandfather’s hearing: “In his later years, he didn’t hear a thing.”

The Journeyman Stonecutters Association of North America was founded in 1853. It’s the oldest active labor union in the United States. At the time the union was chartered, stone carvers were among the highest paid of the building trades, earning wages similar to doctors and lawyers.

By organizing into a union, stonecutters were able to leverage their skills to garner workplace protections that are now, thankfully, commonplace. In 1867, stonecutters were the first trade to secure an 8-hour workday, a full 20 years before the practice became widespread.

One hundred years later, the role of organized workers was still evident. In 1963, laborers at the Rockwood quarry went on strike over a pay raise of 4 cents per hour. In protest, the quarrymen leveraged their industrial know-how, repurposing dynamite normally used in the quarry to blow up the administrative offices. The incident was a not-so-subtle reminder to stay on the good side of people who wield explosives in their daily work.

Thanks in part to labor laws, environmental laws, and unions, American quarries have gradually become less dangerous workplaces with better pay and benefits. Even today, improvements in safety and technology continue to make the natural stone industry less perilous and more productive.

Hester explains that in 1980s and 90s, quarrying switched to diamond belt saws. “That got rid of the dust and the noise but brought in the water and the mud,” he says. Despite the updated methods, “there was still a lot of physical labor. Still sledgehammers; still blasting.”

In 1997, Vetter Stone, a limestone quarrier based in Mankato, Minnesota, bought the business, ushering in a wave of change at the Alabama quarry. 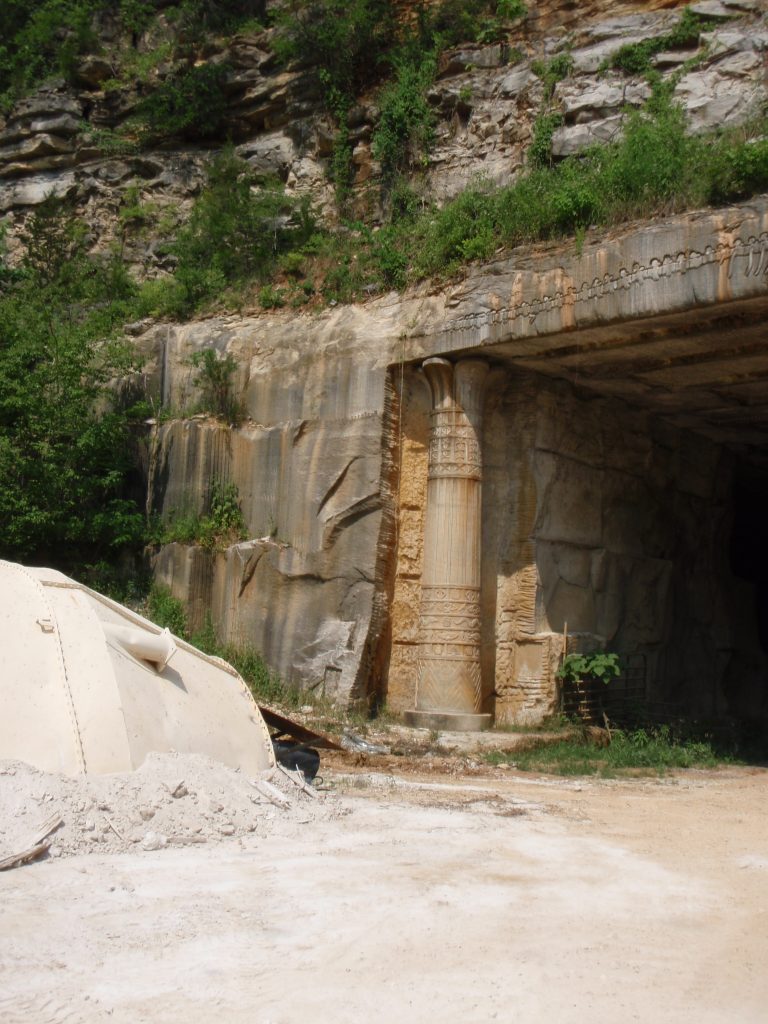 “They put money into this place,” says Tracye Harrison, Alabama Stone’s General Manager. “It was so run down when they bought it. It was in really bad shape.” Harrison is a 32-year veteran of the stone industry, and she was hired not long after Vetter Stone took the reins of the Alabama quarry.

The first order of business was improving the safety of the operations. “They took on that right at the get-go,” says Hester. “There was no safety going on”

Adopting new practices at the quarry was a long play. Harrison recalls that it wasn’t even clear how they were supposed to meet safety standards. Harrison hired Audrey Marsh as her right-hand woman, and the two of them navigated the tricky waters of transforming the company. Hester admires the way the leadership team tackled the change: “Tracye and Audrey, they really stepped it up.”

Harrison, Hester, and Marsh are all quick to praise MSHA (Mine Safety and Health Administration) for helping them build a better program.

“Thank goodness they [MSHA and OSHA] were really understanding and worked with us, because this stuff just wasn’t being done,” Harrison says. “It’s amazing that they helped us the way they did.”

The relationship between the quarry and the government agency could have become an adversarial one, but instead it was a valuable collaboration with the workers’ best interests at the front of their minds. “They just helped us get everything fixed like it needed to be,” says Harrison with a sense of appreciation.

Re-thinking workplace practices requires more than just a directive from above. A new culture needed to be infused throughout the operation. Marsh admits it was major cultural shift to get “the guys” to change their ways beyond the bare minimum. “Hard hats and steel toed shoes was about it for safety,” she recalls.

“Tracye and Audrey and the Vetters themselves, they made safety the top priority, and everybody caught on. It was definitely a culture change,” says Hester. “It took a little while, but now safety is the top priority.”

The proof is in the pudding. The quarry had two inspections the week prior to our conversation. With evident pride, Hester reports: “One inspector said it was the safest quarry he’d ever been in.” 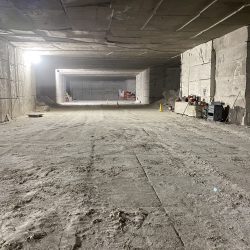 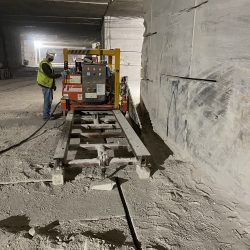 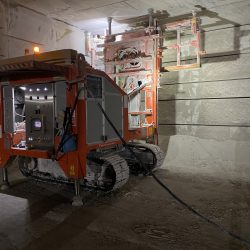 The company is divided into the underground quarry, the production mill, and the offices. “We’re like one big family,” says Hester. The underground quarry operates with a tight-knit staff of 10 to 12 quarriers. Hester continues, “there’s hardly any turnover whatsoever. They enjoy their work and they’re proud of it.”

Harrison is pleased with the improvements that Vetter Stone has brought to the Alabama quarry. “They keep building it up and building it up,” she says. Higher pay and better benefits help the company retain employees. “They’re by far the best owners that have ever been here,” she says. 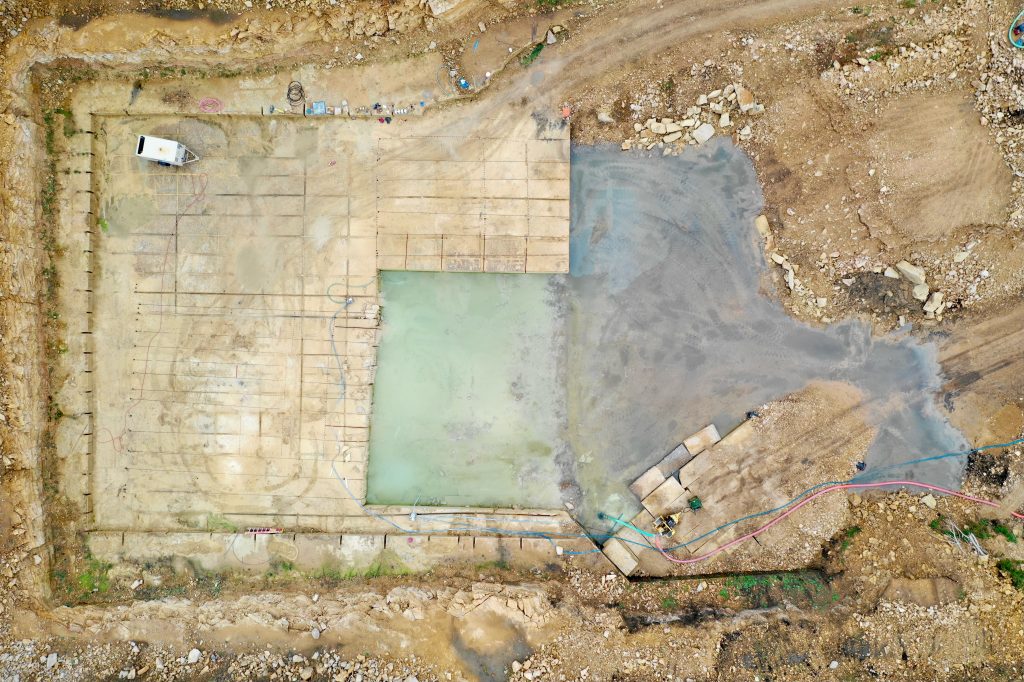 Hester points out how investments in equipment have made the job less strenuous. “In 2004 we got Fantini chainsaws with carbide bits. That got rid of the dust, water, mud, and blasting. It’s more mental work now. There’s very little physical work now,” he says.

But the pride in workmanship remains unchanged. Hester recounts an anecdote from a quarrier named Nicolette. After cutting a block and pulling it away from the quarry wall, she walked across the newly exposed section of rock that hasn’t seen the light of day since the Mississippian Period. “That’s the first step that someone has ever made, right there,” says Hester, smiling. “That’s pretty cool.”

Harrison praises Nicolette, showing a glimpse of the teamwork that makes her employee team so loyal: “She likes to do her own maintenance. She likes to just prove that she can do it. She does a really good job.” 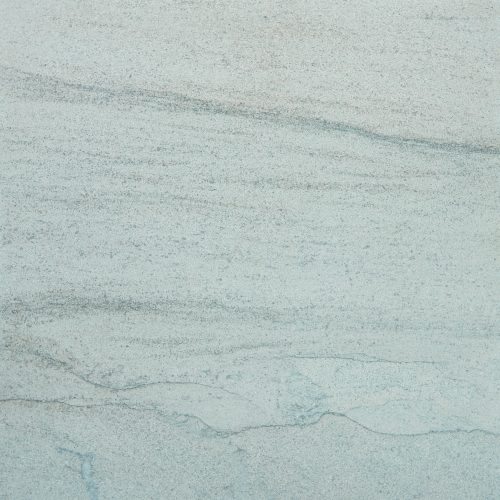 The Federal courthouse in Mobile is clad with Alabama Stone’s signature white limestone.

Wisps of silvery grey lend a sense of character and movement to the stately architecture. Upon closer inspection, the layering is rhythmic and directional, capturing the waves and currents of a coral sand beach, as if sandbars had once migrated right down Joseph Street.

The observation turns out to be almost plausible. The Alabama Stone quarry taps into the Bangor Limestone, a 330-million-year-old remnant of an environment similar to today’s Bahama Bank—a shallow, tropical sea. During that time in geologic history, the northern portion of the state was part of an inland seaway

One of the hallmarks of Alabama Stone is its oolitic texture. Ooids are small, rounded pellets of limestone that are formed when waves slosh particles back and forth in lime-rich seawater. As underwater currents roll the grains around, they become coated in calcium carbonate. The more they roll around, the more layers get added. A magnified cross-section of an ooid reveals an internal structure made of thin, concentric layers.

Ooid sand resembles a collection of small white beads: rounded, glossy, and uniform in shape and size. The same currents that jostled the pellets across the sea floor also piled them up into ripples and shoals, making a cross-bedded pattern in the stone. Cross beds are gracefully curved, pointing in the direction that the water once flowed. A keen-eyed observer can put her finger on a single, individual ripple of sediment; a passing tide from millennia ago, frozen in time.

Projects near and far

Business is brisk at the quarry, with blocks coming out of the ground from April through October, and fabrication humming along year-round. “It’s crazy busy right now and it seems to be holding steady” says Harrison, noting that the Covid pandemic hasn’t diminished demand. “This whole year has been busy,” she says. 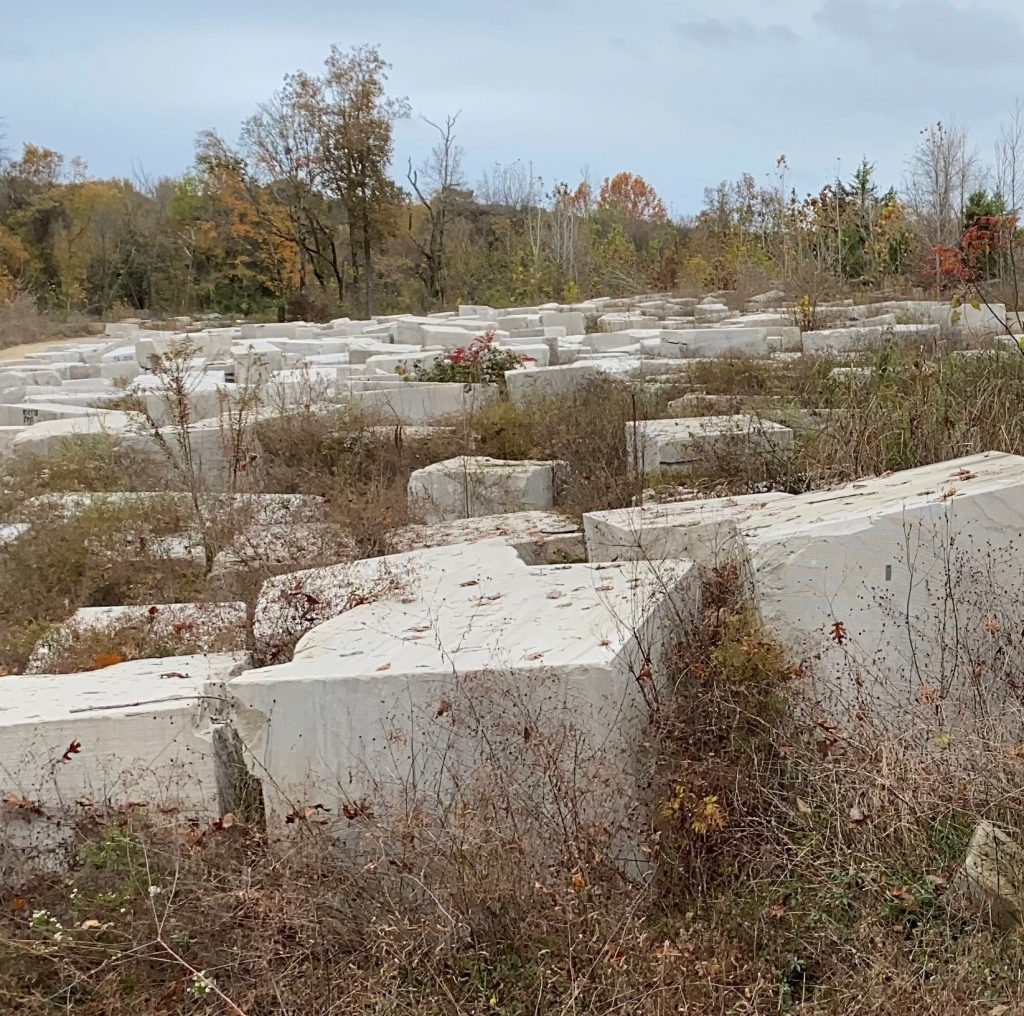 The stone is in demand for projects near and far. “New York City’s got buildings everywhere with this stone on it,” says Harrison, noting that Washington D.C. and Canada are common destinations for Alabama Stone. “We ship all over,” she says.

Most of the work is for custom commercial projects such as universities, banks, courthouses, offices, medical campuses. And on the smaller scale, “today a guy picked up a one-piece hearth for his residence,” notes Harrison. “So we do that, too.”

The stone earns LEED credit for locally sourced material when used within a 100-mile radius of the quarry, and old-fashioned local pride boosts the popularity of the product. “A lot of people want to use us because we’re in Alabama,” says Harrison. “The University of Alabama uses us over and over.”

There’s also a practical reason that architects prefer a domestic product. “When you’re dealing with an overseas stone if you have any sort of problem, you’re six weeks out from a replacement stone,” explains Harrison. “Little things become real big things if it’s holding up a job.”

Harrison made her foray into the stone industry as a draftsperson, producing detailed drawings for each piece of stone. For custom work, every piece of stone has its own pattern and particular dimensions.  “It’s like a jigsaw puzzle,” Marsh says. “You have to get all the pieces to fit just right.”

Harrison brushed off the notion that she’s a female pioneer in a male-dominated industry. “Oh I don’t know,” she says with a sigh. But she admits that she appreciates her leadership role a bit more as she gets older and reflects on her career. At the outset, though, “I was just trying to make a living,” she says. 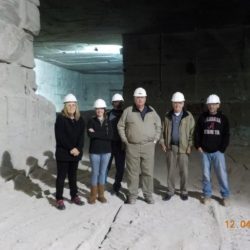 Tracye Harrison with customers at the quarry. 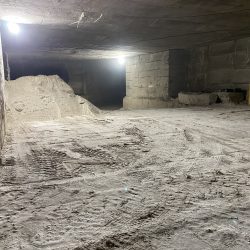 Last year, Harrison was featured by the Natural Stone Institute’s Women in Stone program that offers mentoring, resources, and events for women who work in the stone industry. Harrison doesn’t feel that her gender influenced her path one way or another.

But Harrison’s work speaks for itself, both in terms of the bustling quarry and its productive workforce. Hester is quick to point out what makes Harrison a capable leader: “Tracye is fair to everyone, she hears everyone. When she took over, she demanded that culture change to make it safer and a better place to work. And now we’re reaping the benefits of it. It’s a great place to work. It’s safe. Everybody feels at home. As far as I’ve ever heard, everybody respects her.”

A warm smile spreads across Harrison’s face as she listens to Hester. The sense of appreciation and trust among the three managers is palpable. Between them they have 70 years of experience, and it’s clear they feel a sense of satisfaction in their efforts to make the job better and safer for everyone.

Marsh articulates her pride in the company and her role in shaping it: “It really makes me pleased, when you go somewhere and you see the stone and you think, that came from Russellville. That came from where I work. That makes you feel good. To know that it came from us!”