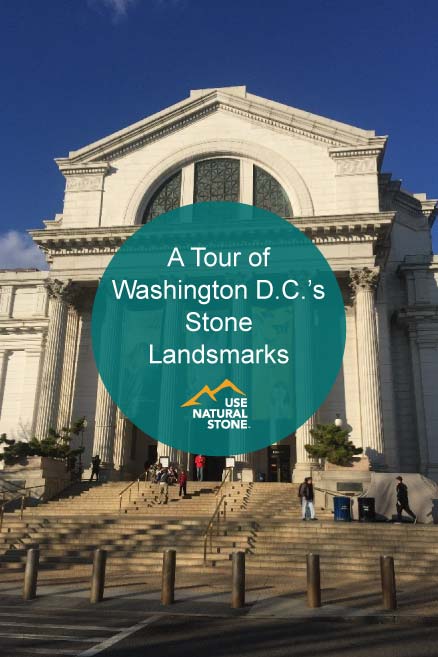 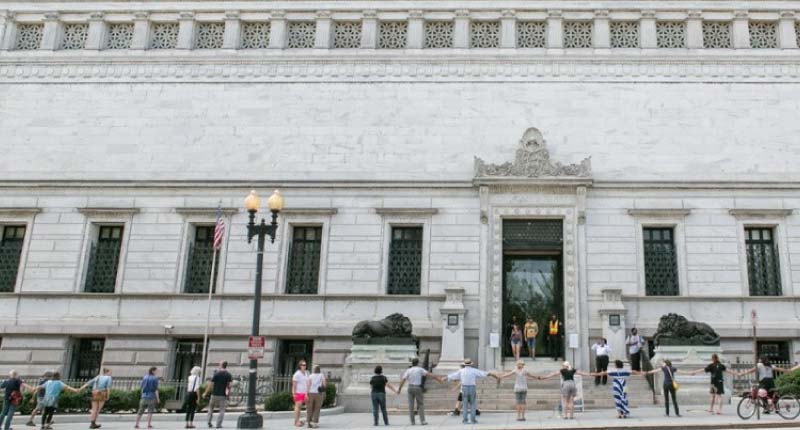 Reprinted with permission from Polycor.

With outstanding monuments and some of the world’s best museums and cultural institutions, Washington, D.C. is a must-see destination. While the sheer number of sites may seem overwhelming, Washington is an easily navigable city. The nation’s capital is rather compact in size and easy to explore on foot. You might say it’s the perfect walking city. Washington was elegantly planned by Frenchman Pierre Charles L’Enfant, who came to America to fight in the Revolutionary War and went on to become a trusted city planner for George Washington.

Each memorial and monument is an opportunity to reflect on the history of the country and its defining moments and people. It’s easy to focus on the individual buildings and monuments. When you do, you will see that many of these historic and important structures are made of stone from America’s greatest quarries. 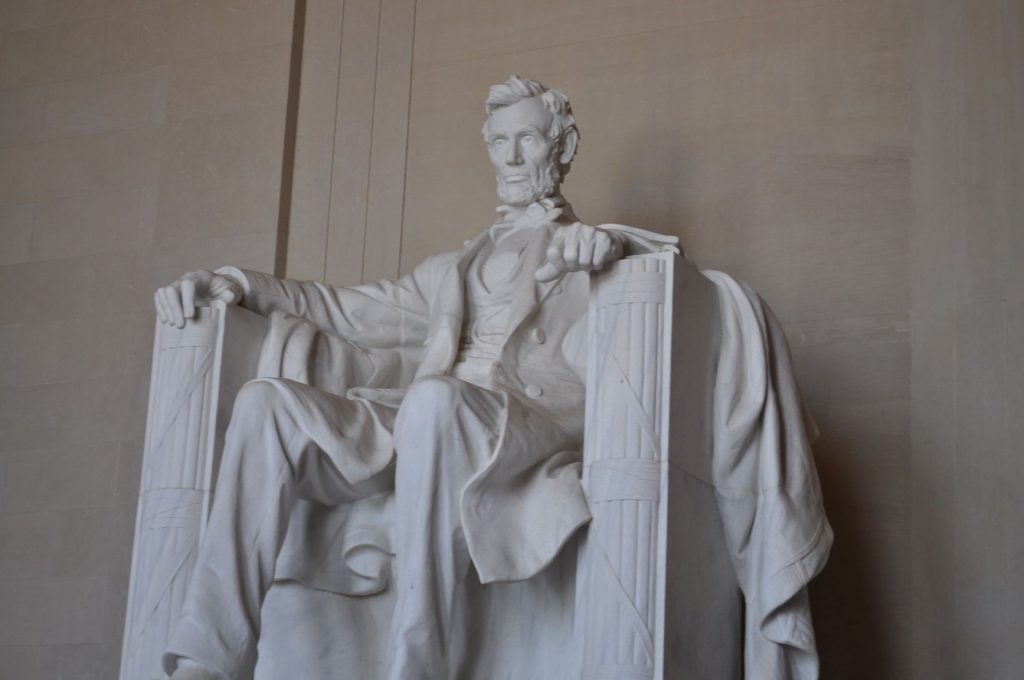 First things first. Start your tour by saying hello to Honest Abe. The Lincoln Memorial is easily one of our favorite sites in the city. Located at the western end of the National Mall, the dignified memorial features an imposing 19-foot statue of a seated President Abraham Lincoln. It overlooks a reflection pool and the views from the memorial are spectacular. Since it was dedicated in 1922, the Lincoln Memorial has been home to many defining moments in American history. It was on the memorial’s steps, for example, that Martin Luther King, Jr. delivered his “I Have a Dream” speech.

The structure was designed by Daniel Chester French in the style of a Greek temple with 36 Doric columns representing the 36 States of the Union at the time of Lincoln’s death. The interior chamber’s columns, lintels and walls were cut from Indian Limestone, a beautiful light-grey to bluish-grey oolitic limestone. It’s an example of how the subtle and sophisticated Indiana Limestone has given some of the most iconic buildings in the country the gravitas and elegance they deserve. The Lincoln statue itself is composed of White Cherokee marble from Georgia, meticulously carved from 28 separate blocks and weighing an astonishing 175 tons. The finished pieces were shipped individually from the renowned Piccirilli Brothers’ studio in NYC direct to Washington to be reassembled with perfectly matching joints, giving the appearance of a monolithic piece of marble. Originating from Polycor’s centuries-old quarry, Georgia marble is both stylish and homogeneous, making it a natural choice for major architectural projects and American heritage buildings. 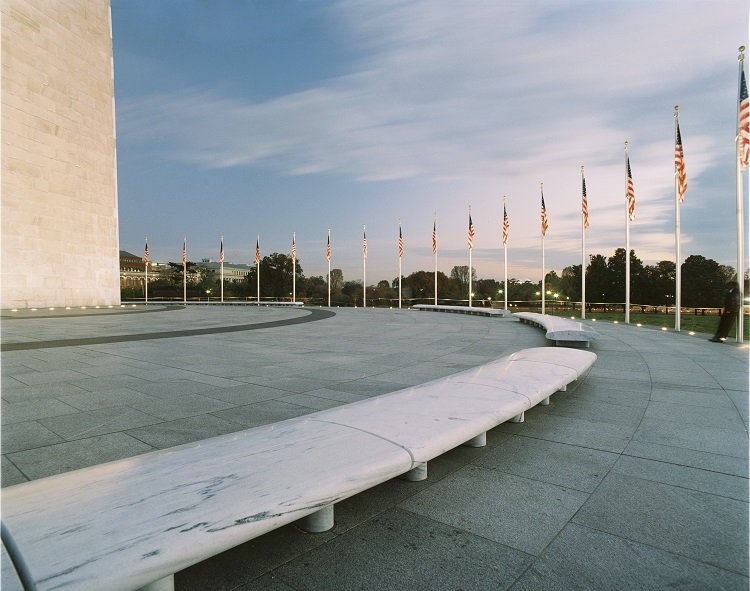 Next, cross through the famed National Mall, America’s most-visited national park (it’s sometimes called America’s front yard). As you wander along the wide, pedestrian-friendly, tree-lined boulevards you can’t help but feel just how much you are surrounded by history, as well as by the present—you’re sure to see political activism in action. The Mall is the perfect place to take five and fuel up. Food trucks have become a less monumental, but no less sought after, attraction. Grab lunch, then head over to the Washington Monument plaza, which surrounds the towering Washington Monument in the center of the Mall. Take your lunch on one of the long and elegant plaza benches made of polished White Cherokee marble. They curve around the plaza, appearing to float on a surface of flamed Cambrian Black granite pavers. With the Washington Monument as a backdrop it’ll be one of the most memorable, and monumental lunches, you’ll have. 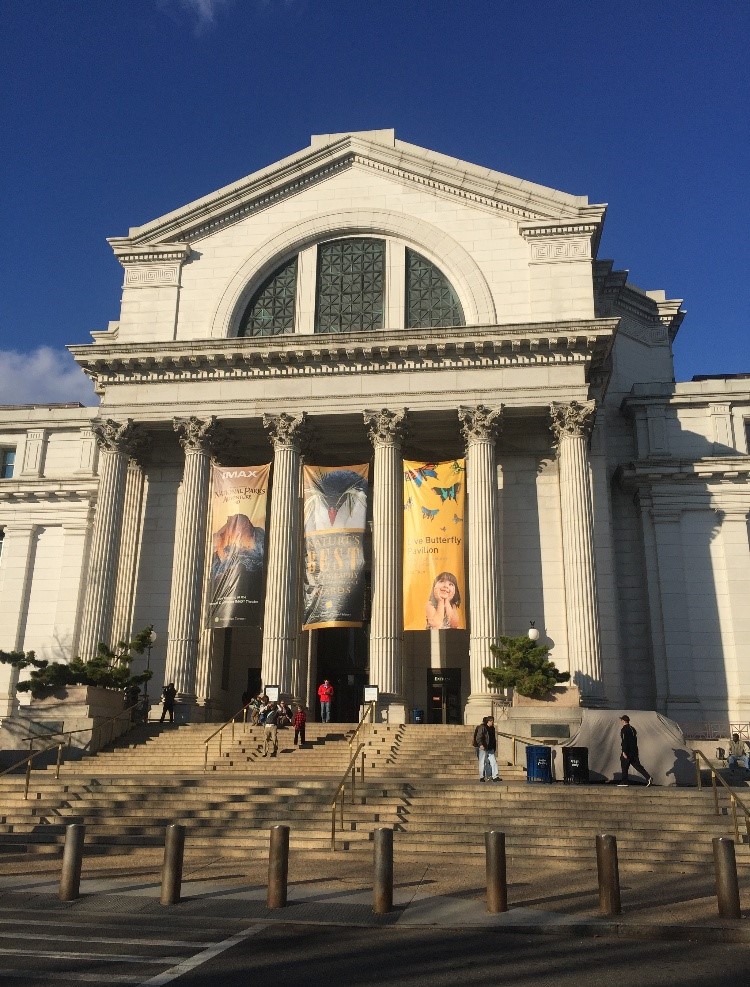 At the far side of the mall are the world-renowned Smithsonian Museums. They are collectively called the Smithsonian Institution, and consist of 17 museums, galleries, and a zoo. The Smithsonian Museum of Natural History is an all-time favorite that first opened in 1910 and is dedicated to natural world discoveries. Inside are 140 million-plus natural science specimens and cultural artifacts. From the outside it beckons you with its green dome and immense size (it’s about as big as 18 football fields). The museum is clad in flawless, even grained polished Bethel White granite quarried in Bethel, Vermont. The stone’s purity of color and uncommon strength have made it a natural fit for grand projects that will stand the test of time and quality. The Bethel White granite has maintained its bright white tonality over the last century thanks to its unique mineral properties. The design by renowned architects Daniel Burnham and Charles McKim includes immense intricately carved Corinthian column capitals—a stunning feature of this Beaux-Arts style that make this stop worth the trip. 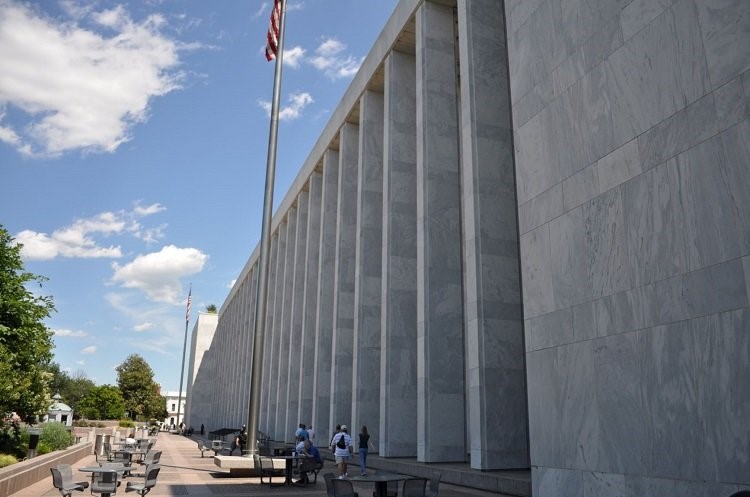 Stop #4: James Madison Memorial Building at the Library of Congress

From the Smithsonian, it’s just a few minutes to the next stop. The James Madison Memorial Building at the Library of Congress is awaiting your arrival. This vast building is both a memorial to a president and the largest library structure in the world (it encompasses 1.5 million square feet of space). That’s fitting, as the 4th president of the United State, and Father of the Constitution, James Madison, was known to be a particularly literate president. The Madison Building was designed by the firm of DeWitt, Poor, and Shelton. Construction began in 1976 and it opened in 1980. With its tall colonnade of unadorned piers, the design references classical architectural ideals while also embracing a modern spirit. The building is clad entirely in large panels of White Cherokee marble. This Georgia marble has been quarried for well over a century and its density and tightly interlocking calcite crystals make it a durable choice for exterior applications. It’s also a popular choice for countertops and other residential applications. 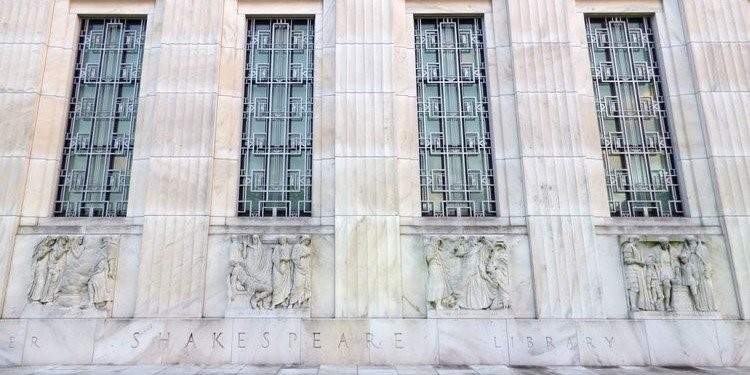 It’s just a couple minutes jaunt, but in a culturally linear path, to the Folger Shakespeare Library. A couple of hours will fly by as you take in the world’s largest collection of Shakespeare-related and rare Renaissance books. The Folger holds more than 250,000 books and 55,000 manuscripts from 1641 to the time of Mark Twain. The museum is also known as an innovator in rare print preservation. Indeed, the contents are wonderful, but for many visitors, the building is an equal draw. It was designed by Paul Philippe Cret, for (and with) Henry and Emily Folger, a New York couple who shared a lifelong passion for Shakespeare and collecting. The building makes a bold figurative statement about the importance of culture to a democracy—and a literal one. It’s extensively ornamented with inscriptions of quotations by and about Shakespeare. But what may grab you first are the bas relief sculptures on the exterior of the building. Carved in White Georgia marble they illustrate Shakespeare’s works with vivid detail. 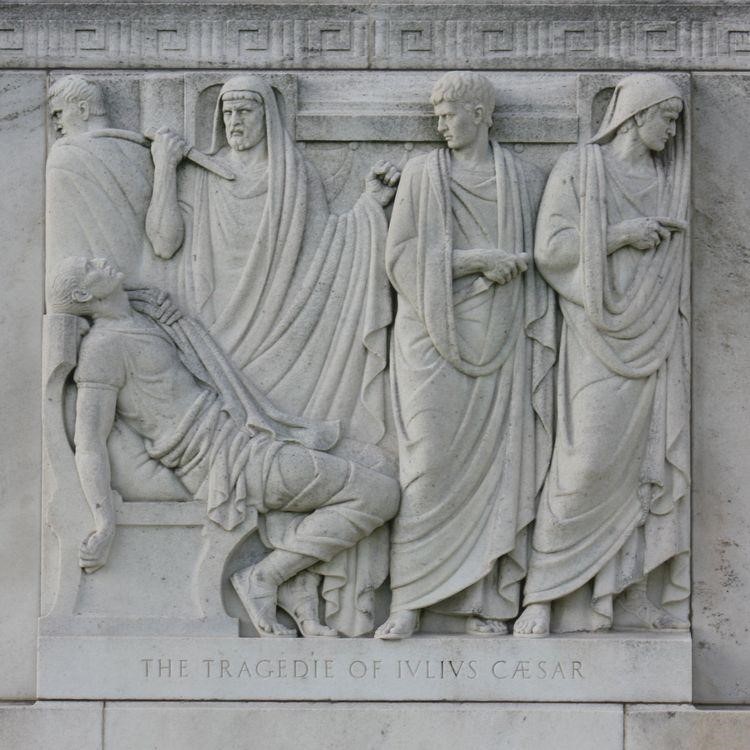 White Georgia marble is an excellent medium for carving and sculpting. 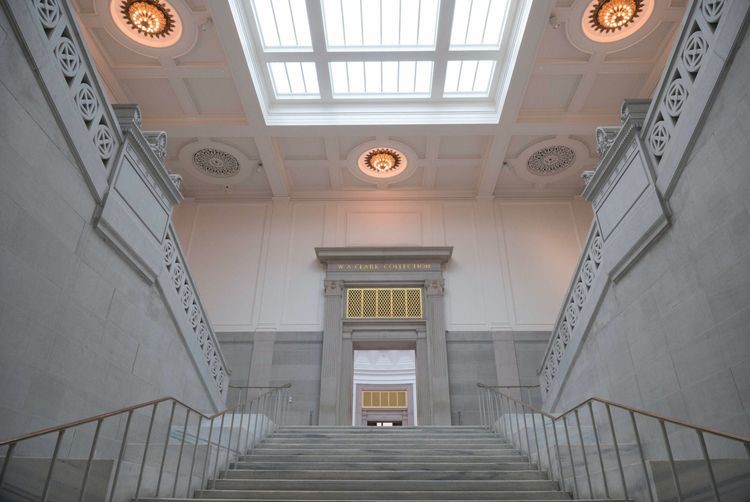 Stop #6: The Corcoran Gallery of Art

Next stop, the Corcoran Gallery of Art. The Beaux-Arts landmark near the White House was long Washington’s oldest private art gallery with a fine collection of American paintings curated by the founder of the museum, William Wilson Corcoran. These include “George Washington” by Gilbert Stuart and “Niagara” by Frederic Edwin Church. The collection also includes works from the great European artists including Delacroix, Renoir, Monet, Rembrandt, Degas, and Picasso. The building was designed by the American architect Ernest Flagg and opened its doors in 1897. Today, the collections have been taken over by the Smithsonian and the National Gallery, and the building now houses the Corcoran College of Art and Design. The lavish style of the building was a natural choice in the 19th century for this kind of private gallery. For art patrons it was a chance to demonstrate their wealth and their public spirit of charity. Of note in the building is the elegant curving facade made of White Georgia marble, and the interior grand staircase, made up of solid blocks of the same marble each over a foot thick. 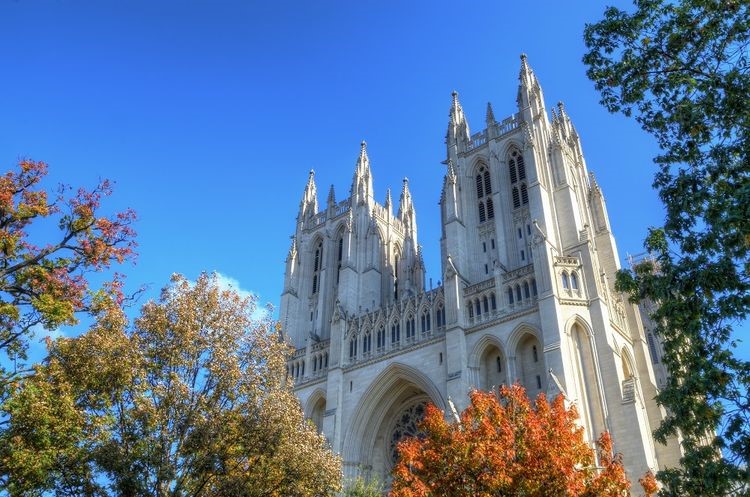 Not far from the famed Smithsonian Zoo, north of the Mall and its monuments, is the majestic National Cathedral. It would be hard to miss the neo-Gothic structure. It’s one of the biggest churches in the US. While construction started at the turn of the 20th century, the National Cathedral employs the traditional building techniques of the 14th-century English Gothic style. The medieval style was hugely innovative in structure, technique, and materials (did we mention it was labor intensive?). The cathedral was built using solid masonry, with no steel reinforcement on any part of the building. The various elements of the building — buttresses, pinnacles, arches, vaulting — bear against each other to keep the building intact and upright.

Most of the architectural stone on the magnificent cathedral was fabricated in the great limestone mills of Indiana. Rustic Buff Indiana limestone used for many of the ornate stone carvings in and around the church: These works of art were executed in clay by sculptors then cast into plaster models to be reproduced in stone by the carvers. The statuary, finials, rosettes, reliefs and other carved elements arrived at the cathedral in block or roughed out form. Indiana limestone’s strength and uniform character made it the natural choice, too, for the flying buttresses and arches that hold the structure together.

Fun fact: The master stone artisans were also given some freedom to add some of their own signature touches to certain carvings on the cathedral such as gargoyles, the menacing-looking carvings on exteriors of medieval churches designed to ward off evil spirits, and, functionally, to direct rainwater from foundations and stained glass windows. Visitors might be surprised to see what looks like a Darth Vader gargoyle. They’re correct. In the 1980s, while the cathedral’s two west towers were under construction, a competition was held for the design of one of the gargoyles. A young teen submitted a drawing of the Star Wars villain and now Darth Vader is embedded in stone on the capital’s National Cathedral. A wonderfully American story. 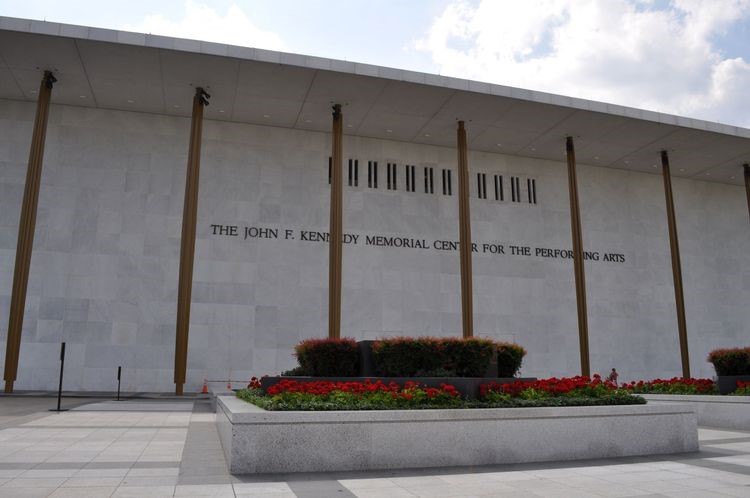 Stop #8: The John F. Kennedy Center for the Performing Arts

Cap off your event-filled day with a concert at the John F. Kennedy Center for the Performing Arts. If your budget allows, snag a ticket to a coveted play or musical. If not, there are free concerts of various genres on the Millennium Stage at 6 p.m. every evening. The center is not far from the Lincoln Memorial where the day of touring started, so we’ve come almost full circle. President Lyndon B. Johnson laid the cornerstone shortly after Kennedy was assassinated, and the center opened in 1971. The Kennedy presidency was in great part defined by its promotion of the arts. Noted authors, musicians, poets and artists frequently visited and performed at the Kennedy White House. Today the center is one of the country’s premier performing arts spaces. It was designed by famed architect Edward Durrell Stone. The expansive plazas are covered in 2″ thick flamed Bethel White granite pavers and treads leading up the grand staircase, as well as surrounding planter walls and caps done in honed finishes. The medium grain, white granite has been quarried in Bethel, Vermont since the 19th century and has become a world standard for monumental grade granite. 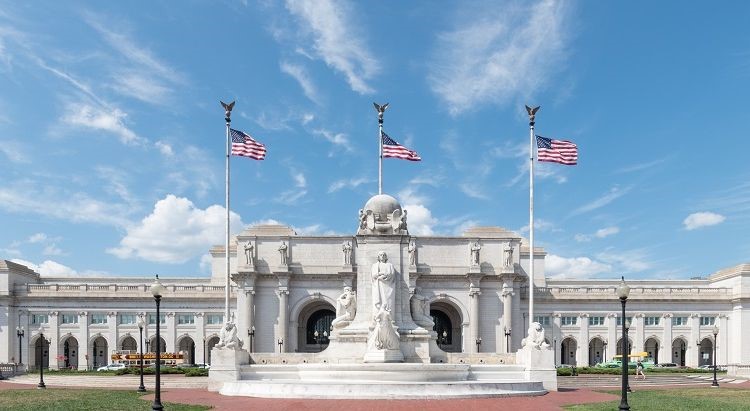 If you are leaving D.C. you might be doing so via Union Station, the capital’s impressive train station. But even if an Amtrak trip isn’t part of the plan, a visit to the spectacular station should be on your list. Union Station opened in 1908 after a three year building project. The Beaux-Arts design, with grand statues, majestic arches, dramatic staircases, gold leaf ceilings and a lovely plaza, is truly remarkable. It was also built with Bethel White granite. At the outset of the building project European stone masters were brought in. One of them carved a small statue of a young woman with flowing hair tumbling over her shoulders. She wears a rippling garment and flowers cradled in her arms. The statue was carved to prove that granite could hold the edges required to make the fine detail needed in the huge tableaux. It has continued to do so up to this day. 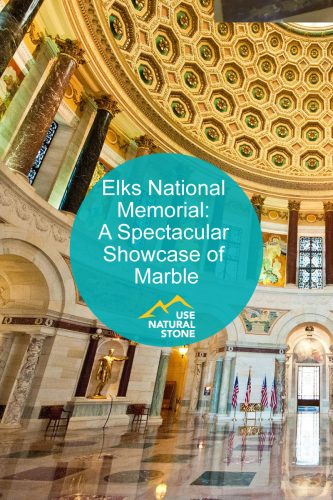 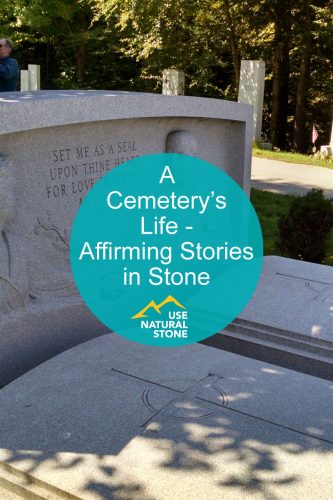 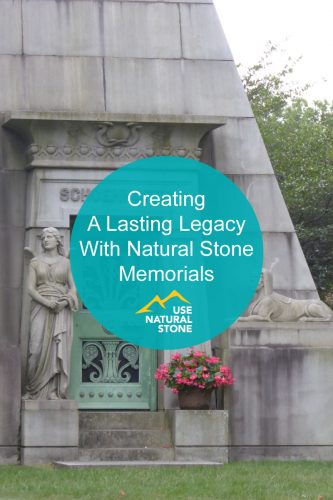