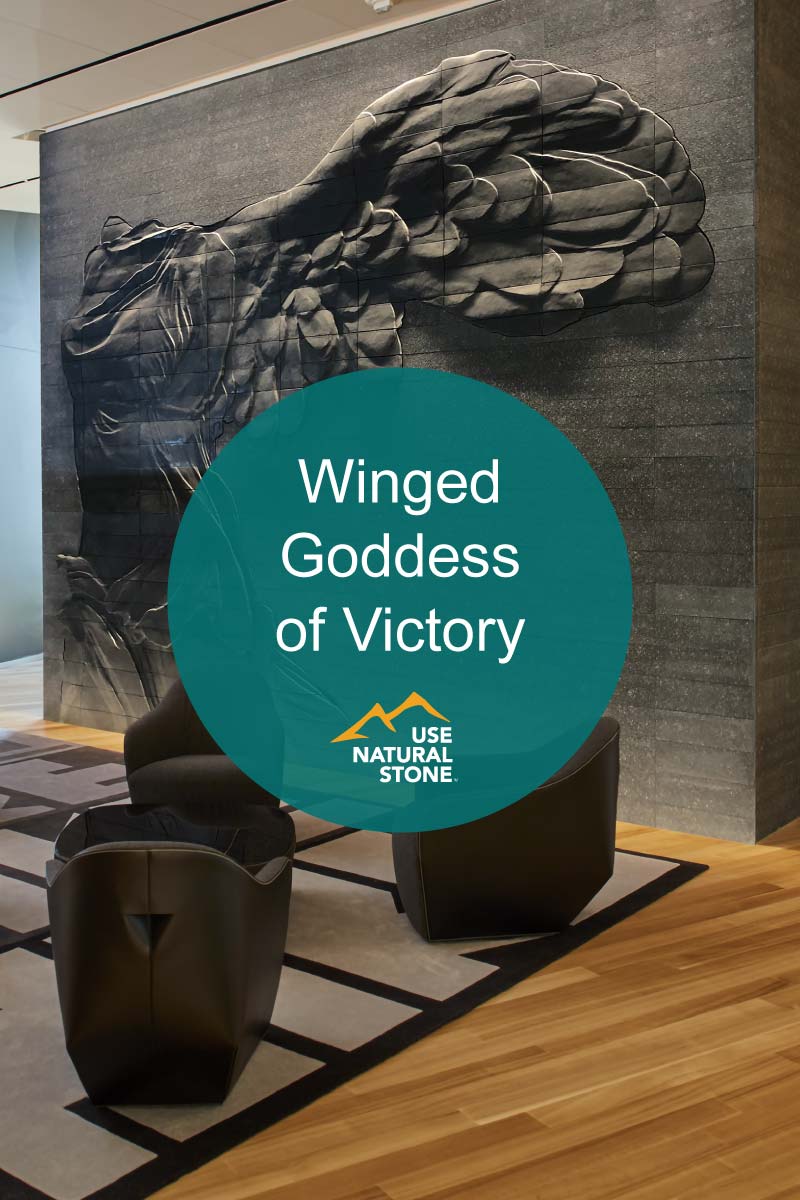 A New Take on a Classic Icon: The Winged Goddess of Victory 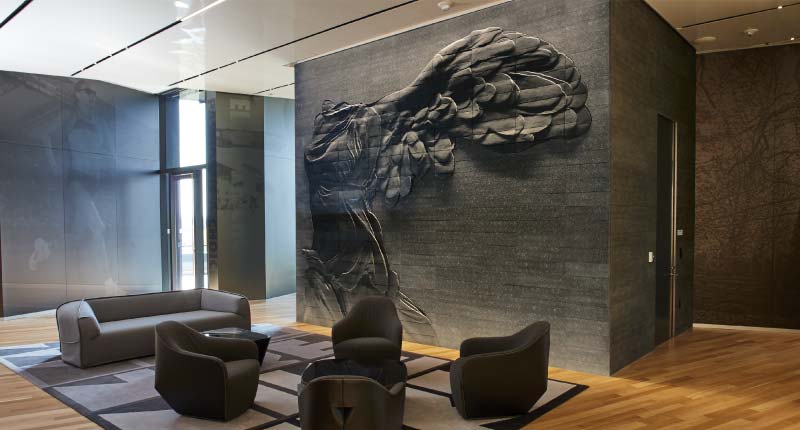 In Ancient Greece, the goddess Nike personified victory. She was a messenger whose wings enabled her to fly over the Earth rewarding victors of battle or athletic competition with fame and glory. The most famous depiction of Nike is the Winged Victory of Samothrace, also known as Nike of Samothrace. This marble Hellenistic sculpture dates to the second century BC and is one of the world’s most celebrated sculptures. In 2017, it caught the eye of a private Fortune 100 company in Portland, Oregon, who tasked a talented team of professionals to reinvent the iconic artwork on the wall of the executive boardroom at its corporate headquarters. 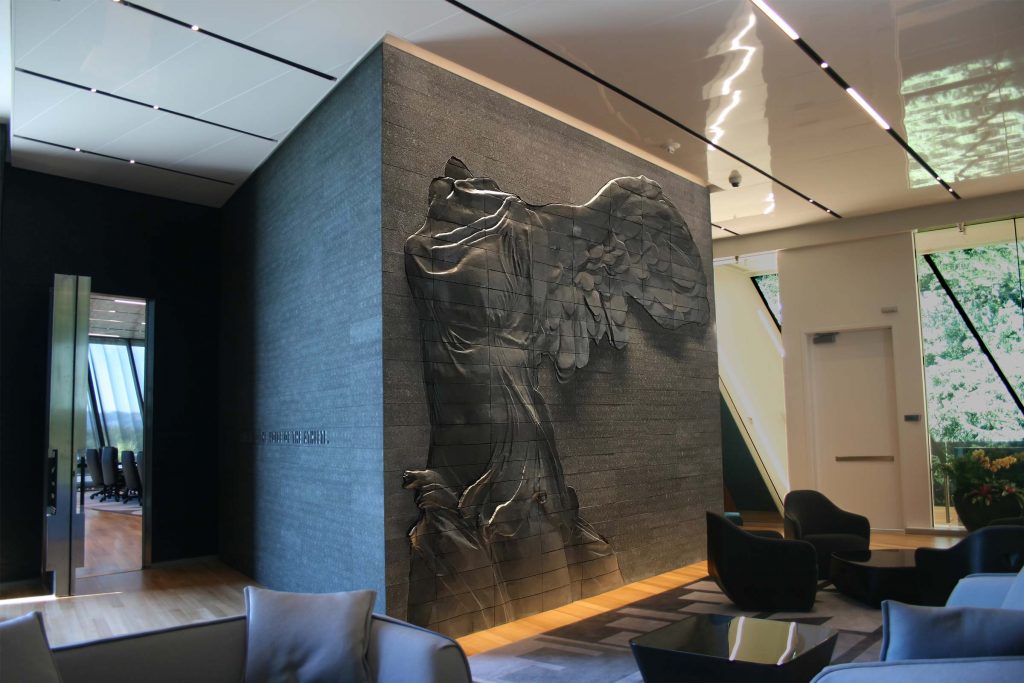 Peter Andrusko, master sculptor and owner of The Andrusko Group in Portland has been crafting stone sculptures for over thirty years. “The Winged Goddess of Victory,” a 15-foot-tall, 18-foot-wide bas-relief comprised of basalt and granite, is one of the most complicated and technically challenging projects he has ever worked on. “I’ve never done anything even remotely as complex,” he said.

“In May of 2017, I was approached by the project manager for special arts projects’ at Hoffman Construction Company and began a dialogue about the viability of creating a massive stone bas-relief sculpture. When I was approached by one of the West Coast’s leading general contractors, I was thrilled. They had found me, which in a sense partly validated decades of effort on my part in trying to become known as a source of quality and innovation in a very obscure artisan niche.”

Andrusko learned some “old school” stone techniques from his father, a successful brick and stone mason, but is mostly self-taught, specifically in robotic Computer Numerical Control (CNC) technology, which has been beneficial to his business. “Robotics is not only the future, more importantly, it’s an absolute gift of life to the carver,” he said. “About 15 years ago, the robotics industry changed and started becoming accessible to workshops. Let’s just say it’s a very natural fit and what I know of hand-craft and my natural abilities in technology found a very, very interesting nexus.”

To create The Winged Goddess of Victory sculpture and wall design, which relied on robotic CNC machinery, Andrusko utilized a basalt quarried in Moses Lake, WA, which was supplied by Stone NW in Vancouver, WA, and Indian Black granite from Savema in Pietrasanta, Italy. “This work is constructed from a very hard, dense and brittle local black basalt, which was then inlayed into a field of waterjet textured Italian black granite tile,” Andrusko said. “There is also some lettering carved into the granite, which is also the product of my studio and hand.”

The basalt used for the sculptural elements is a ubiquitous Pacific Northwestern material that is available in various colors, textures, and forms. “In this particular case, it’s an amazingly tight-grained satiny black that takes a polish,” said Andrusko, who worked with a local stone company that cut the rough blocks to-size and supplied the slabs, which were then cut to fit the super tight specs needed for the project. “The core block dimension is 3 x 6 x 24 inches. Of that overall depth, the carving is contained within just 2 1/2 inches of depth and is then inlayed into the Graffiti granite paneling covering the wall.

According to Andrusko, there are over 300 parts in the finished piece, many of which were first roughed into shape with CNC robotics technology, then hand-finished and fitted into the cut-to-fit granite. “It is a process essentially similar to the one used by many stone carving studios throughout time—in this case, using robotic machines instead of human workers, such as those famously employed by Rodin in his studio to perform the roughing from the original models, which in this case are digital files.” 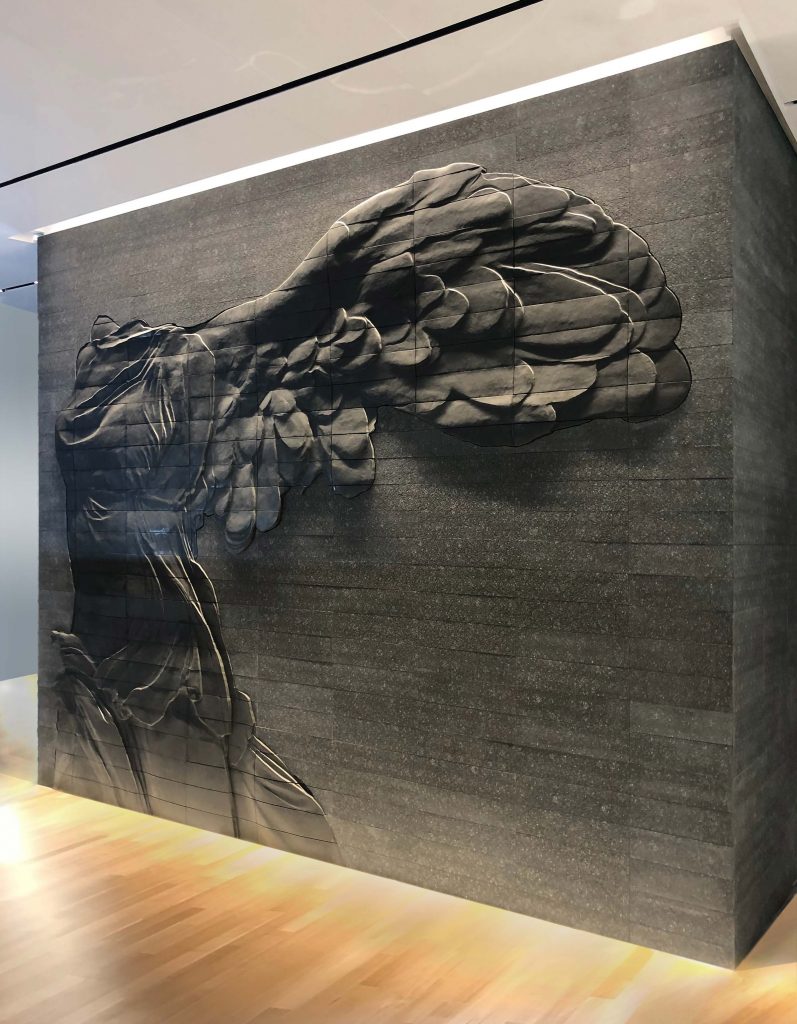 According to Andrusko, the anticipated weight of the stone on its own was intimidating.  “The immediate need was to minimize the overall mass—getting as much detail as possible for something of this scale necessitated a balance between weight reduction (thickness of the module) and down-lighting. Also, keep in mind that all of this mass is hanging off the wall structure along a thin ribbon of floor inside of a modern-constructed building on an upper floor. Due diligence required some engineering attention.”

A compromise was found by creating a 3-inch thickness overall, with a 2 1/2-inch maximum range to work within. “This got us our range and the digital arts team was able to model the lighting and the relief topography to maximize the effect visually,” Andrusko said. “The reality is that there is a massive amount of ambient light in the space, which interferes to some degree with the LED down-light effect during the day, but some of the imagery was taken at night and one can see an amazing depth and clarity of surface that is truly a wonder; it appears far deeper and more defined than the 2 1/2 inches would suggest. A success by the design team and lighting specialists.”

The design team used displacement mapping to create the digital renderings, an alternative computer graphics technique that uses a texture map or heightmap to cause an effect where the actual geometric position of points over the textured surface are displaced, which gives surfaces a great sense of depth and detail, permitting self-occlusion, self-shadowing and silhouettes.

“The value of this is that the computer software I used to develop the cut files can accurately manage the range of black (lowest point) to white (highest point), which are, in essence, user-definable, which allows the Z-axis to be established properly so that everything fits in 3D,” Andrusko detailed. “The hand-carving is to blend and fit everything and to put the finishing touch into the carving.

“There was a great deal of struggling with the size of the file initially and trying to solve some problems like positioning into the fixed grid of the field materials that needed to be discussed and established before breaking the image into precise parts,” Andrusko explained. “Also, the client insisted on 1/16-inch tolerances between parts. Once all the grid issues were worked out, then the parts were segmented into the modules. I broke out the grid elements in granite from the basalt and cut stencils to mark and fit the granite part by part — hand-cut with a ring saw. I initially proposed that this be done with a waterjet, but in the midst of the time crunch, I elected to keep this in-house to cut by hand while the CNC machines were running. It turned out to be a very good decision for reasons I wasn’t expecting having to do with the final fitting. The G-code files were generated to run the machines and smaller parts were nested into the stones in groups. Everything was coded and numbered so that the parts could be fitted and mapped for the installation team.”

Constructing the 300 parts for the project required an intricate process. “The parts cutting involved an initial ‘roughing’ stage of milling,” Andrusko explained. “About 1/16 inch passes to get to the core shape of the part. The secondary stage of milling involved a smaller bit and a change of trajectory that netted the finished part fairly close to the final dimensions needed. That final step involved stacking the stones into a grid, hand-finishing and cleaning, and tightening the cuts and sharp edges in order to have a smooth transition between adjacent parts. The largest single area I was able to get flat at one time in the studio was approximately 4 x 4 feet.”

While the digital technology was needed to create a sculpture of this stature in such a short amount of time, Andrusko believes that hand-carving was still a key factor in the project’s success. “The robotics utilized in the studio amplifies the productive output of the carver manifold, but it still requires the breath of life of the master carver to perform the final steps by hand to finish and detail the sculpture,” he said. “However, what the technology allows is for a single individual to perform the work of dozens of people working practically non-stop for months on end.”

Even with the aid of technology, completing the project was still an arduous task. “I was able to keep running six CNC machines alone for most of four and a half months,” Andrusko said. “My day started at around 5 a.m. and ended at or near 10 p.m. Cutting hard stone requires a very attentive focus. Water supply is critical or there could be a fire, bit break, damage to the work piece, or at minimum a whole bunch of wasted time, so there was no practical way to run the machines all day every day as much as I wanted to or would have liked to. The machines needed to be monitored constantly and any instances of failure caught and corrected as soon as possible. I was often literally running and constantly on my feet moving between machines, changing parts out, swapping bits, clearing obstructed water lines and quickly became attuned to the sounds (healthy and otherwise) of each machine in the studio. I stopped keeping track of time, but it was a relentless grind of 14 to 18 hours a day, seven days a week, and other than a few hours for Thanksgiving and Christmas with family, it didn’t stop until I was done.” 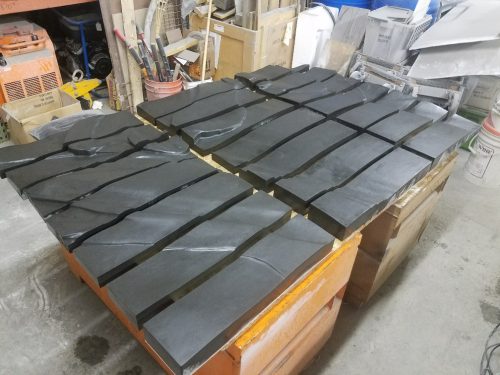 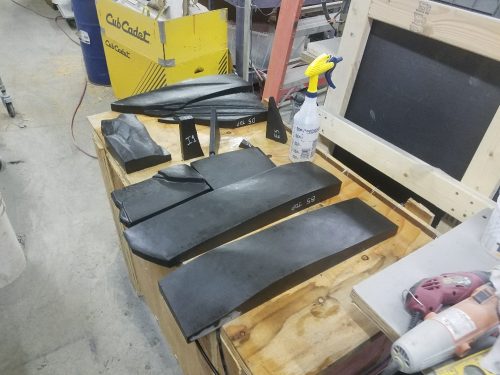 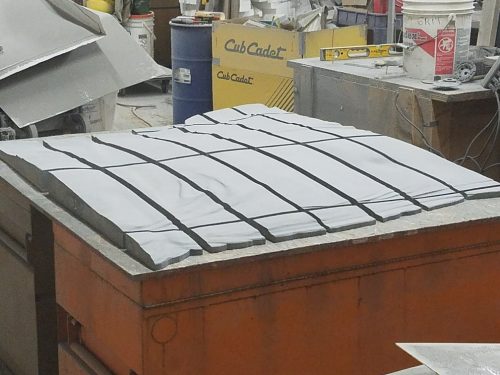 The installation, which was completed in about a month, required one stone mason and three tile setters. The team bonded the wall tiles to USG Corporation’s Durock Brand Cement Backer Board using Laticrete’s 257 Titanium thinset mortar, which is designed for the installation of large-format tiles and gauged porcelain tile panels and slabs. “Thicker carved stones were installed with Latapoxy 310 Stone Adhesive,” said Floyd Goodwin, project manager at Western Tile & Marble. “We used copper wire anchors into studs.”

Goodwin explained how the heavy, irregularly shaped tiles needed to be carefully installed to ensure flatness and desired joint thickness. “Maintaining joint dimensions and plumb was crucial because the carved stone had irregular edges and the substrate was wavy,” Goodwin said.

“They are truly professional craftsmen and I know they were also working under extreme stress and with a really tight schedule,” Andrusko said of the team. “They took my work and completed the site installation without a break or a scratch. I wasn’t needed onsite. There wasn’t a single punch list item related to the sculpture.”

Since the project’s completion, visitors have been amazed by the artwork and its resemblance to the original Winged Victory of Samothrace. “The client loves it,” said Goodwin.

The project received a 2018 Pinnacle Award from the Natural Stone Institute in the Architectural Carving/Lettering/Sculpture category. “One would assume the hope of any artist is to somehow imbue the breath of life into the inanimate; to effect in some profound way the beholder of the work,” Andrusko said. “That this now exists in the physical world where others can experience it makes me very happy.” 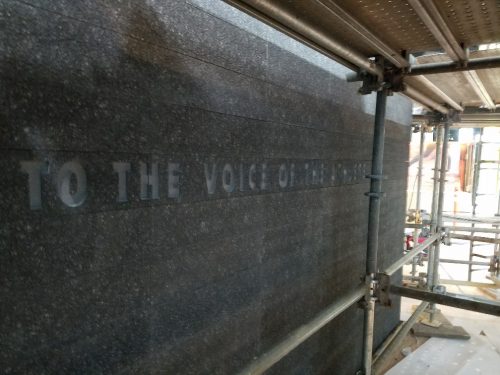 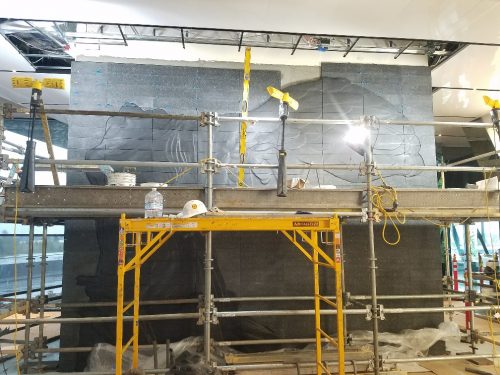 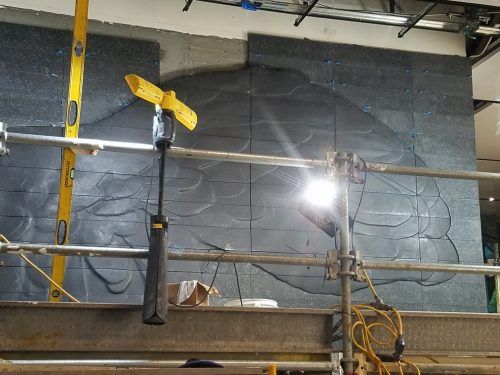 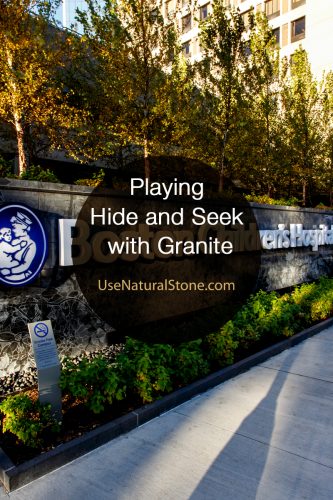 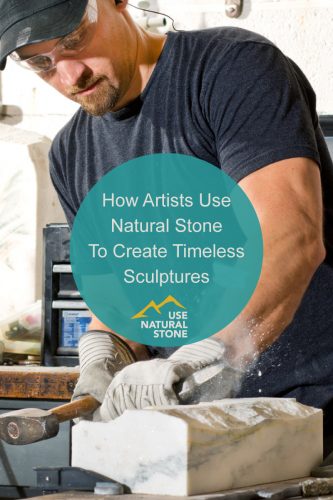 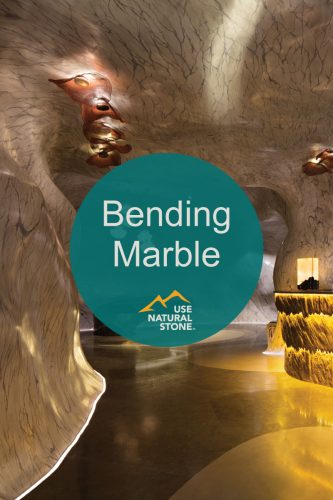