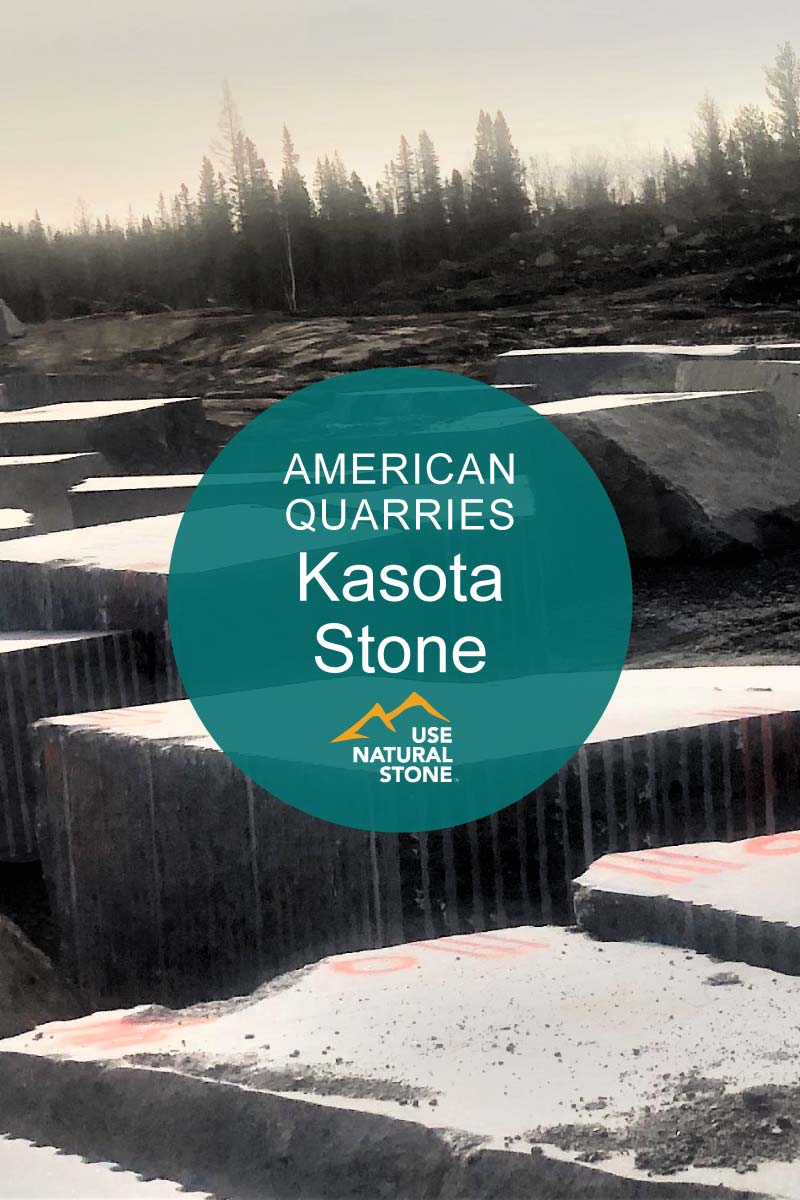 Get alerts via email when new articles are posted. 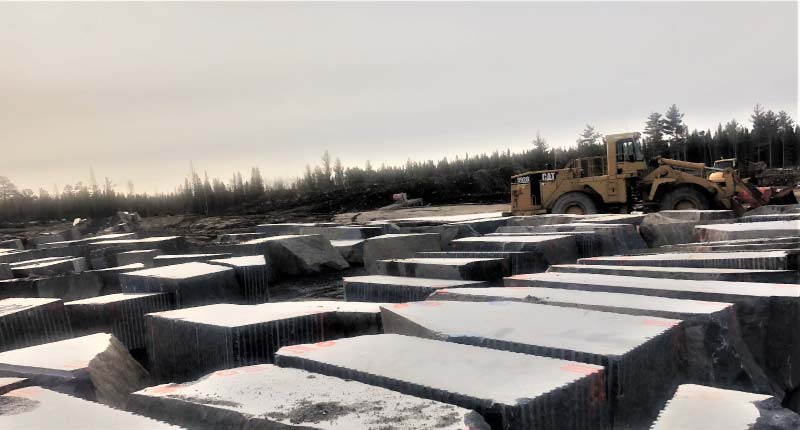 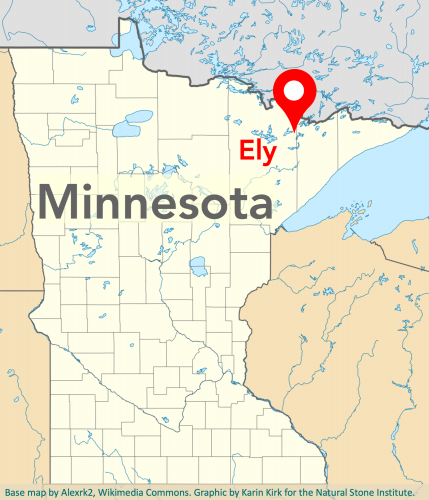 Jake Barkley appears to be perched on the edge of his seat. In a Zoom conversation with Barkley and his colleagues at Kasota Stone, the vibe is one of casual intensity and sharp focus. Much of the stone industry rests on centuries-old quarries with a multi-generational history of operations, but Kasota Stone emerged only seven years ago. “We’re kind of breaking in on the scene,” says Barkley, the principal founder of the company.

Barkley and his team bring forth an unusual business model, a collaboration with the State of Minnesota, and a clearly-articulated determination to grow and thrive.

“How do we scale up and grow this business at a rapid rate to be able to compete at a national and international level?” asks Barkley, reflecting on the question that’s driven him for the past seven years. “That kind of stuff just doesn’t happen by accident.”

Kasota Stone adopted an approach called Entrepreneurial Operating System, which is a framework to help companies understand their goals so they can stay focused on their main purpose. Business decisions are centered around a set of core values, which Barkley recites: “Commitment to excellence, tenacity to deliver, empowered optimism, problem solver, and family.” He adds, “It kind of sounds squishy, but for us, it’s real.”

The best place to see the values in motion is to look at the people at the company. “One of our strengths is our people,” says Barkley. “In the quarry business, there is nothing easy that happens here,” he says, acknowledging that it’s one of the toughest jobs he’s ever had. “Some of these folks just work their tails off and tenacity to deliver is first and foremost one of our best core values,” he says. “We’re super proud of that.”

During the pandemic, “big get-togethers just haven’t happened” says Barkley, “which is like the antithesis of building your culture.” Undeterred, the management team has been facilitating mobile, outdoor lunch gatherings for each department. “Colin makes a mean lunch that nobody can resist,” Barkley says with a grin, referring to Colin Kimball, the company ‘integrator,’ who oversees the various departments throughout the company. 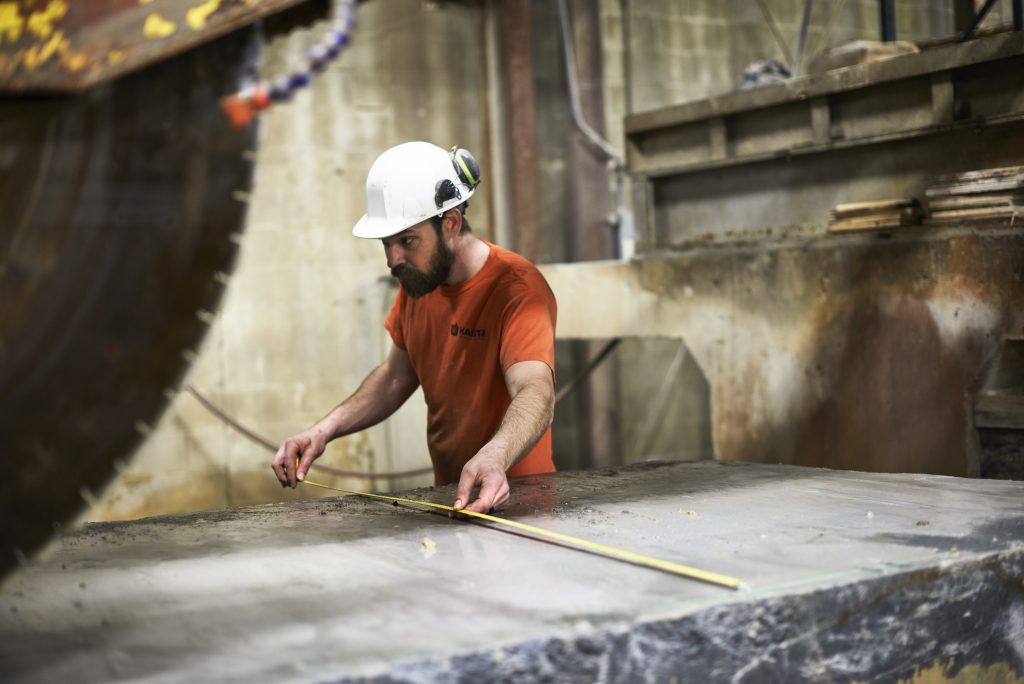 Brandon Archer, Director of Sales and Marketing, jumps in with a recent anecdote: “We did one in January and it had to be 15 degrees outside and Colin and I were cooking burgers. It was fun. When you bring some dedication and actually go out to deliver ­– people appreciate that.”

Perhaps a healthy appetite is an unspoken addition to Kasota’s core values. “We’ve got a bunch of big, strong eaters on our team,” Kimball mused.

“The find of a lifetime”

Kasota’s initial foray into natural stone production was a limestone quarry at the company’s headquarters in Mankato, MN. In the last few years, they’ve opened to two new granite quarries in northern Minnesota ­–Superior Northern granite near Ely, and a green granite quarry near Isabella. Barkley describes the company’s Superior Northern granite as “a deposit of rare quality.” 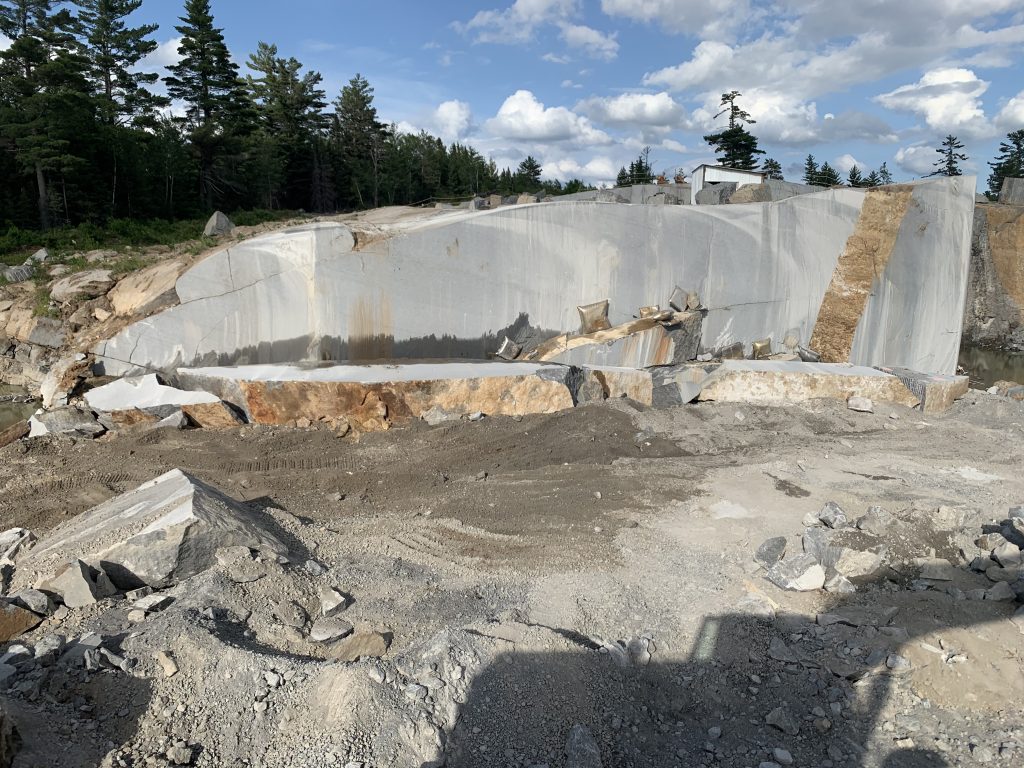 The discovery was no accident. Minnesota’s Department of Natural Resources is charged with finding and managing mineral resources in the state. A state geologist identified the sparkling black granite as one with market potential, and Kasota leased the land from the state and began quarrying in 2015.

The stone has few joints or fractures, and can be extracted in large, flawless blocks. Barkley describes quarry faces over 100 feet long and 40 feet tall with no irregularities or cracks. “The color is consistent the whole way,” he adds. 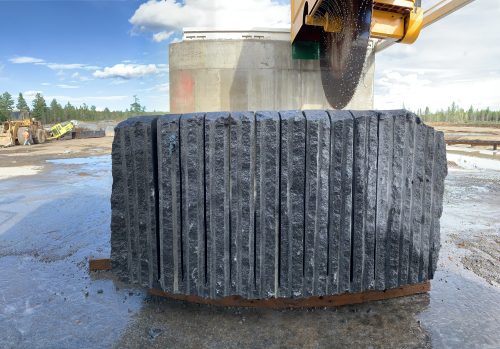 If you want to please your geology friends, Superior Northern is called anorthosite. The term ‘black granite’ is a geologic oxymoron, because granites are light colored by definition. Superior Northern is made almost entirely of dark grey feldspar. Feldspar crystals have flat surfaces that reflect light, and the larger the crystals, the bigger the wow-factor. Depending on the surface finish, Superior Northern can have a subtle glint, a hologram-like twinkle, or a brilliant gleaming sparkle.

Barkley recalls that the geologist who found the deposit “went bonkers for it because he knew what we had in there,” he says. “It was the find of a lifetime.”

Around 1.1 billion years ago, the North American continent literally began to tear itself in half. Driven by a plume of heat rising through Earth’s mantle, the landscape that straddles today’s Minnesota-Wisconsin state line cracked open, with Minnesota heading northwestward, and Wisconsin pulling away to the south. This feature is called the Midcontinent Rift, and it was potentially the birth of a new ocean.

As the tectonic plate started to rupture into two pieces, basaltic lava oozed up and filled in the cracks. The plate stretched further apart, more lava seeped in, and the sequence repeated. The stretched and broken crust created a low area in the landscape; a basin, if you will. This process went on for millions of years, and the basin widened and eventually filled with water. The Atlantic Ocean was formed the same way, and is still continuing to widen today, pulling Europe and North America ever farther apart by about an inch each year.

But the Midcontinent Rift stopped rifting, and geologists still aren’t exactly sure why. After around 20 million years the action stopped. An ocean wasn’t destined to separate Wisconsin and Minnesota after all, and North America remained united as a single continent. Geologists call this a ‘failed rift,’ which seems a bit judgmental.

The Midcontinent Rift left behind a layer 10 miles thick of various igneous and volcanic rocks. Today, old lava flows form beautiful cliffs along the north shore of Lake Superior. An expanse of dark colored, dense igneous rock now sits north of Lake Superior, called the Duluth Complex. Most of the rocks in the Duluth Complex didn’t erupt like lava. They were formed in vast, underground pools of magma that cooled slowly over millennia. As the magma cooled, the semi-molten rock separated out into layers of different chemistries and densities. Pockets of metallic elements settled to the bottom of the magma chamber. Today, ores of nickel, copper, and platinum are found in the Duluth Complex, setting the stage for mining.

Amid mining controversy, quarry is “a win”

Public opinion in the rural Ely area is sharply divided over prospects for a new copper mine. Mining for metallic ores has a tragic legacy of land and water that remains contaminated for generations to come, forcing residents to choose between economic gain and environmental loss. That dilemma is thankfully moot when it comes to a granite quarry—natural stone is inert and nonpolluting.

“We can do what we do without releasing any sulfur and without discharging water that has contaminants in it,” says Barkley. Quarrying stone “is something you can do here that benefits economics and the community and the state, but we’re not doing all these harmful things along the way.” 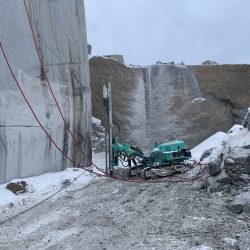 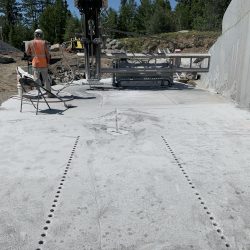 Barkley says that people in the region are “hypersensitive to heavy metal mining,” and the topic is fraught with conflict. Amidst that controversy, the quarry offers a more agreeable option.

“We’re viewed as kind of a big win for this type of work in this industry,” he says.

From stones to school funding

Mining royalties are an important economic contribution to the state of Minnesota. Companies that extract minerals and rock from publicly owned land pay a royalty to the public coffers. The Superior Northern quarry sits on School Trust land, which means that the royalties help fund the state’s school system. In 2020, Minnesota’s School Trust lands generated $28 million in royalties for public education.

The active quarry occupies 36 acres within a leased property of 120 acres. “It is just beautiful,” says Barkley. He describes the site as a “drive-in quarry” because the deposit juts upward from ground level, with almost no topsoil above the rock. “The glaciers wiped it clean,” says Barkley.

“Just drive up and there’s the face—unreal,” says Barkley, panning his hands across an unseen slab of rock. “Like I said, it is rare.” 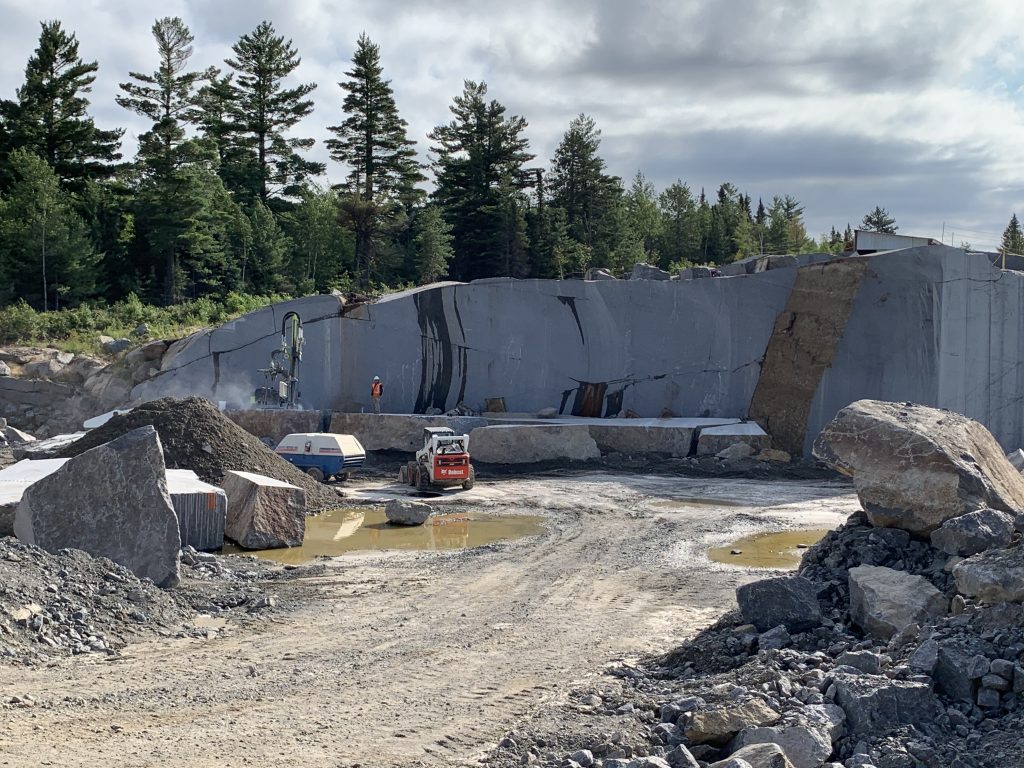 The current emphasis for their black granite is landscape architecture, according to Archer. “We are having a lot of success with granite pavers right now,” he says. “Landscape is a big part of our business, but we do a lot of cut-to-size architectural stone as well,” says Archer.

Superior Northern is suited for walls, sculptures, and monuments, and the lack of fracturing in the stone makes it adaptable to many uses. The granite is fabricated in their Mankato factory, or sold as raw blocks and slabs. 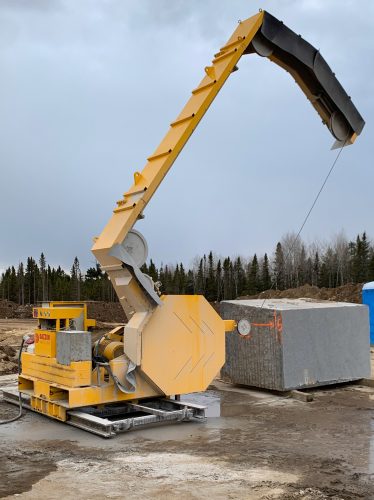 Concrete has a cheaper upfront price, but Barkley explains, “a lot of those materials were having issues after ten or fifteen years, from road salt and other things.” Over the long haul, granite outlasts concrete several times over, says Barkley. “So we’re finding a good niche—using stone in those instances where it can stand up to the elements.”

Archer fills in more details, “I’ve gotten a lot of feedback from architects that they absolutely love natural stone,” but the higher price can be a drawback. “We’re always having to coach and really help them to look beyond the initial upfront costs and consider the lifetime costs and benefits.”

“We’re more sustainable than the concrete,” adds Barkley. Concrete production releases CO2 from crushing limestone and uses substantial amounts of energy to manufacture. Concrete accounts for 8% of global carbon emissions. For natural stone, the only emissions come from cutting, finishing, and transporting it. The material itself needs no energy inputs.

As 2021 reaches its midpoint, many of us are still wondering what the evolving pandemic has in store for our lives. Barkley reflects on implications for their company as we shift from staying home to branching out again. “I feel like part of the society change in the last year might be people wanting to engage with the outdoors and a simpler life.”

These changes have a direct connection to their business focus, as Kimball explains, “Every commercial project I have seen lately has an acute focus on how to get a great green space.”

Green spaces can be part of a park, waterfront, restaurant, or business plaza. Stone elements within a green space can include pavers, benches, outcroppings, and retaining walls. Using natural stone emphasizes a connection with the natural landscape, and “it’s really clear that people have a heightened level of comfort outside,” says Kimball.

Archer emphasizes that the large blocks of Superior Northern are well-suited for “seat blocks,” and Kimball noted that schools are interested in outdoor benches, “They’re getting ready for next year already, where they want to have 4th grade reading time outside.”

Barkley chimes in, “You know, we talk a lot about how the world has changed in the last year and a half, well, people have changed too. A lot of people are exhausted right now and they are realizing that there’s more to life.”

Barkley takes the conversation full circle by linking back to the company’s vision. “Our purpose is to enrich lives and enhance communities. We want to bring people together in these greenspaces. If we can be a part of that, we want to be.”

An outdoor gathering place for family, friends, and impromptu socializing amongst natural elements may be just the tonic for a weary society.

Barkley adds, “It is my belief that this trend is going to outlive the virus.”