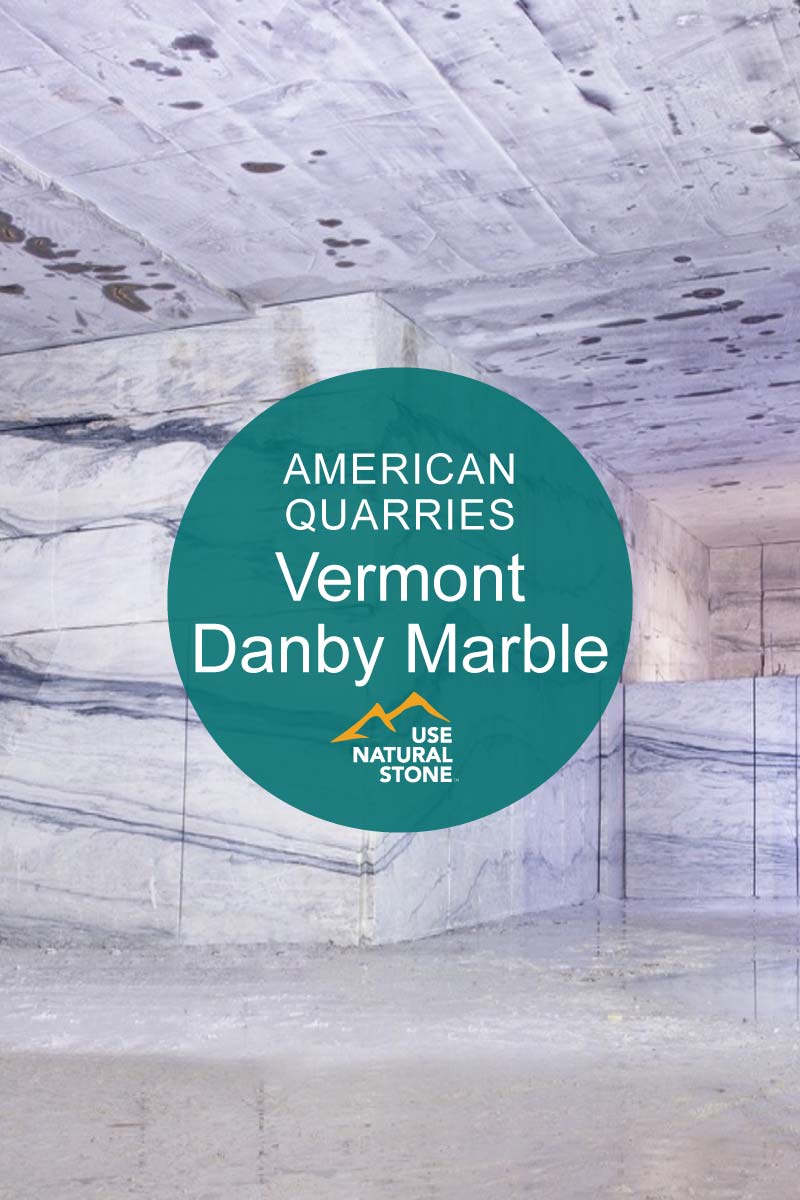 A Mountain with a Heart of Marble: Going Underground with Vermont Danby Marble 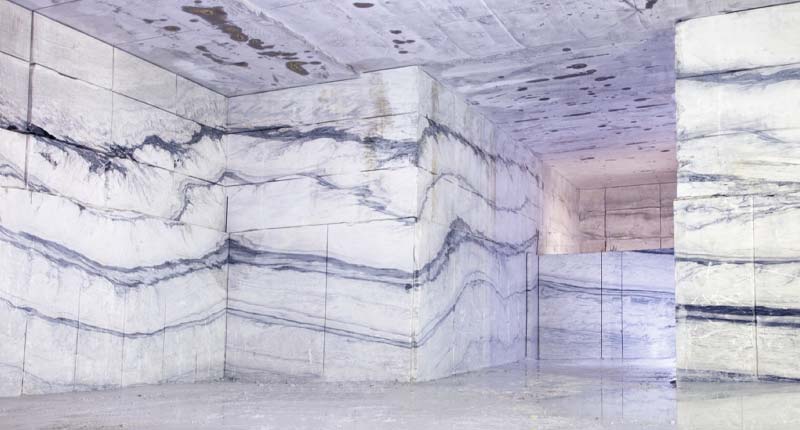 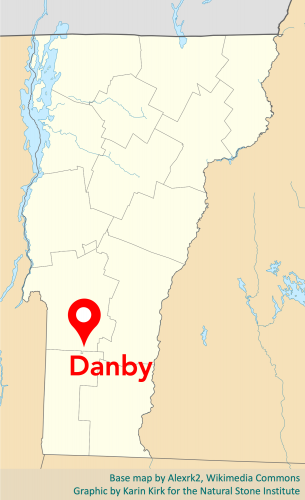 A visitor to the quiet Vermont village of Danby might admire the rolling mountains, stately maple trees, and idyllic small farms. Bed and breakfasts, autumn foliage, and wintertime skiing are among the area’s famous attractions.

But passers-by are unlikely to even realize the tranquil town is also home to a world-class industry. “Unless you know what you’re looking for you never would know that we’re up here,” says Peter Prvulovic, head of sales and marketing for Vermont Quarries Corporation.

Vermont Quarries is the source of Danby marble, a stone with a devoted following among kitchen designers and homeowners and a rich history in American architecture. But the company – quite literally – is on the downlow. “If you know where to look,” says Prvulovic, “you would see a white open space in the middle of a forest.”

Tucked inside Dorset Mountain is the world’s largest underground marble quarry, spanning an area of about 16 football fields and stretching for over a mile – all underground. There’s one entrance to the Vermont Danby quarry, and it’s the same one that’s been in use for over 100 years.

“It’s like a city,” says Luca Mannolini, describing the bright lighting, machines whirring, trucks scurrying enormous blocks of white stone across cavernous spaces, and skilled workers at the helm of state of the art fabrication equipment.

“We do everything in-house,” says Mannolini, the quarry’s General Manager. “And everything underground.”

The Danby quarry sprung to life in the 1850s, working above ground at first, then shifting to underground operations in 1902. In Vermont’s marble heyday, dozens of quarries worked the state’s famous “marble belt.” But one by one, the quarries closed. The Danby quarry was not spared. It also stalled in the 1970s.

In pursuit of high-quality marble, a partnership of two Italian companies, R.E.D. Graniti and Mazzucchelli Marmi, revived the Danby quarry. R.E.D. Graniti is headquartered in Italy’s Carrara region but owns and operates quarries all around the world, including Colorado Stone Quarries and Virginia Mist. Mazzucchelli Marmi is also based in Carrara, where they quarry marble and coordinate sales of marble and quartzite worldwide.

Mannolini moved from Italy to Vermont in 1996 with the tall task of resurrecting the idle quarry, and he’s ushered the business through major changes. “When I came here 25 years ago, without a flashlight in your pocket you didn’t know where to go,” he says.

Since its rebirth in 1993, the company has made steady improvements, from machinery, to workforce training, to customer relations. Mannolini is quick to credit his core team, which includes Prvulovic and quarry manager Keith Millard. While Prvulovic keeps the marble flowing to customers, Millard drives the operation from the opposite end, as he organizes the quarrying to keep a steady supply of fresh stone. “We rely on Keith to get us the right material to feed our gang saws,” says Mannolini. He adds, “We can have all the modern equipment in the world, but if we do not have the right material that equipment is not worth anything.”

Production line entirely inside the mountain

Under R.E.D. Graniti and Mazzucchelli ownership, along with Mannolini’s leadership, the quarry was revived from a dormant state to one that produces over 7,000 square feet of finished slabs per day. For context, that’s enough marble to cover 40 to 50 kitchens every day.

“Our entire production is inside the vacant portions of the quarry that have been quarried out in the 1900s,” explains Prvulovic. “We do our quarrying, our slabbing, our finishing of the slabs, and shipping, all within our mountain.”

The quarry operates with a quick tempo, and Prvulovic appears to have abundant energy to keep pace. “We cut from 6am to almost 11pm on a daily basis, Monday through Friday. Just to give you an idea,” says Prvulovic. “They keep Dan and me busy here!” he laughs, speaking of his colleague Dan Drew, the west coast sales representative.

Most quarry operations have to contend with weather, and many in northern climates close during the winter. “That’s the wonderful thing about being underground,” says Prvulovic. “You can work as many days as you want and you can’t use the rain, snow, sleet, or anything else as an excuse.” 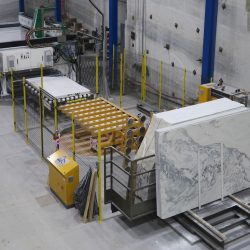 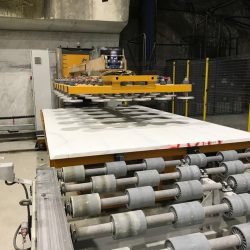 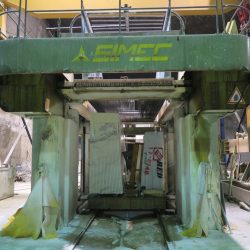 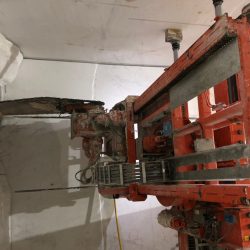 From quarry to countertop in 160 miles

It would be hard to imagine a shorter production chain from quarrying a rough block to producing a finished, packaged product, all before the stone sees the light of day.

From there, most of the stone is shipped a short distance to meet bustling demand in the Northeast. “Obviously this makes it a more sustainable material because we’re not wasting fuel to ship material all over the place,” says Prvulovic.

Danby marble earns LEED points for locally-derived materials when used within a 500-mile radius. Boston, Philadelphia, and New York City all sit inside that perimeter. For example, it’s only 160 miles from the Danby quarry to downtown Boston. Compare that with a shipping distance of around 4,000 miles for a stone imported from South America or Europe, or a whopping 7,700 miles from Asia. Using Vermont marble would shave off 96% to 98% of the shipping distance compared to an imported stone.

Another advantage of the direct supply chain is quick turnaround. “We’re able to deliver to the market in days, what other places would take weeks or months,” says Prvulovic. Between fast production and short shipping distance, the company can get stone to its customers quickly, and keep projects running on schedule. 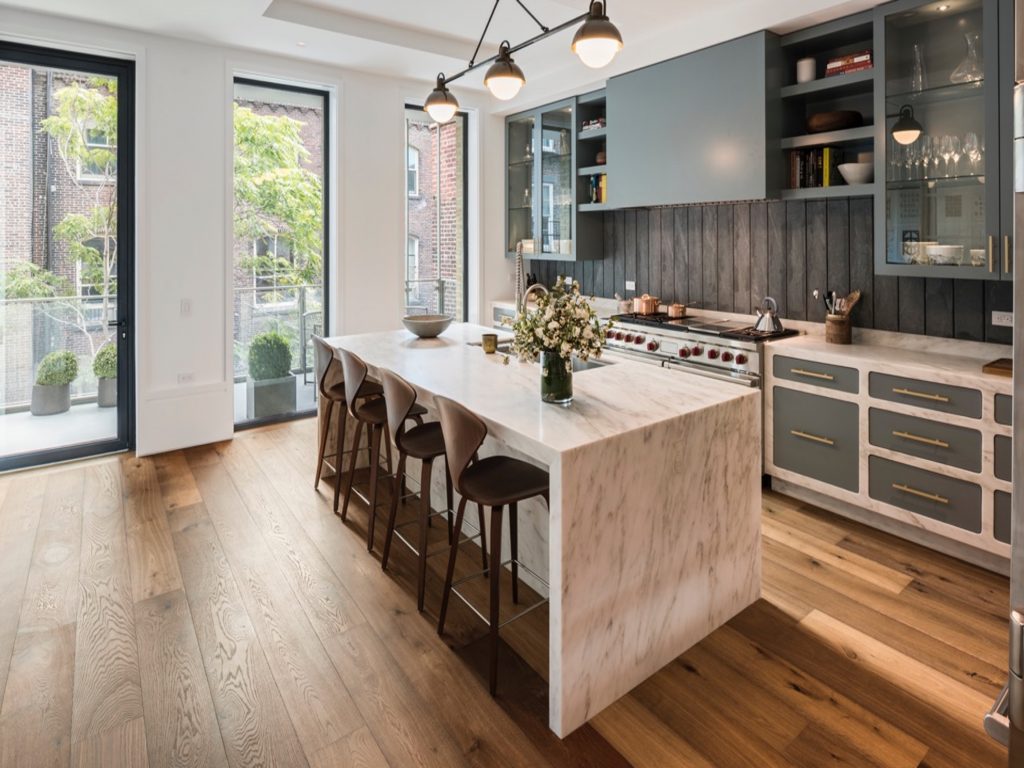 Sustainable from start to finish

The minimal footprint of the Danby quarry creates a low environmental impact. The landscape is not disrupted, blocks are not cleaved from a mountainside, and the operations don’t generate a big hole in the ground.

“We’re basically occupying parts of the mountain that are already vacant,” says Prvulovic. “It just made sense for us to fill those voids and repurpose them.”

In an underground workplace, air quality is of utmost importance. Mannolini explained that all the cutting and polishing machinery is electrical, and the modern diesel loaders are equipped so they produce minimal exhaust.

The quarry has a large ventilation shaft to circulate fresh air, and the operation is subject to frequent air sampling. “We never had a single day where we didn’t pass,” says Mannolini. A major advantage of American stone is the stringent measures in place to protect workers and the natural environment. For some customers, that’s one of the appeals of domestic stone.

Companywide, R.E.D. Graniti strives for sustainable practices, and the Vermont Quarries are beginning the process of pursuing Natural Stone Council sustainability certification. “We as a company believe it’s a very important aspect for us,” says Prvulovic. NSC’s formal sustainability assessment will help the company “see exactly where we fit in,” says Prvulovic. “We’re just getting started.” 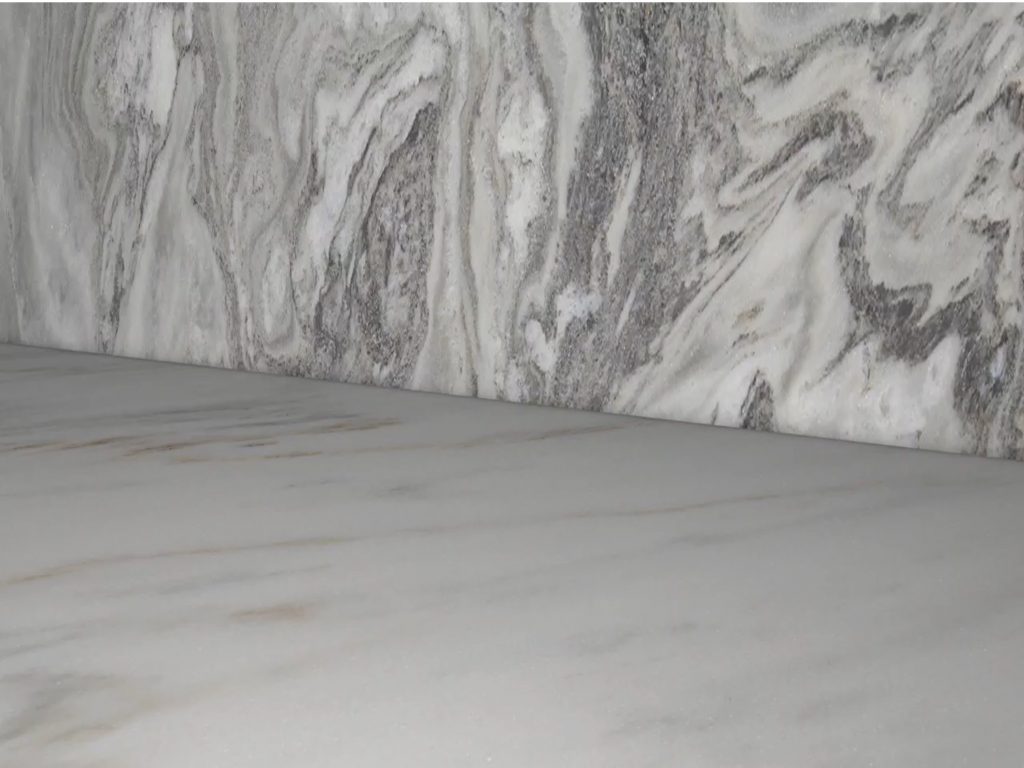 “What people are looking for in the stone is mainly the beauty,” Mannolini says, emphasizing a quintessentially Italian sense of style. Prvulovic follows up with the practicality, pointing out that Danby’s low absorption rate (0.06% to 0.08%) compared to other marbles (typically 0.1% to 0.2%) means Danby marble is less likely to stain. It’s also why Danby marble shrugs off the elements when used outdoors, where it’s been a reliable, historical building stone for over 100 years.

The U.S. Supreme Court, Jefferson Memorial, headstones and amphitheater at the Arlington National Cemetery, and the New York public library are a few well-known examples of buildings that use Danby marble. “It’s been tested, so to speak,” says Prvulovic. 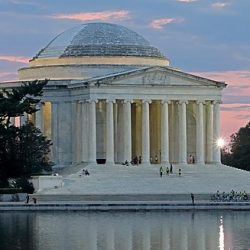 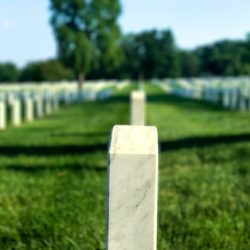 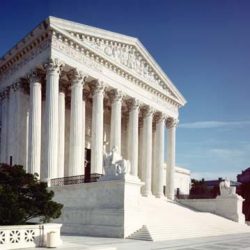 Colors and patterns to suit many tastes

The company is best known for Imperial Danby, which has wispy veins of caramel bronze and warm grey on a pure white background. Several different strata of marble run through Dorset Mountain, allowing for variations in color, veining, and pattern. “We have different sections for different colors,” says Prvulovic.

The quarry produces ten different varieties of marble, from the green-on-white of Vermont Cipollino, to the vivid grey and brown Fantastico Danby, to the serene subtlety of Olympian White. In addition to the varieties of colors, the blocks can be cut either parallel to the grain, or perpendicular to it, which changes the aesthetic character of the slab.

Mannolini, who is a geologist, notes that the stone is all the same, technically speaking – it’s all marble. But just like a few drops of food coloring will greatly change the look of vanilla frosting, small amounts of phyllosilicate minerals (in Montclair Danby) or clay minerals (in Imperial Danby) can create an entirely different appearance and mood.

“That’s what makes us one of the more different quarries in the world, is that we’re able to extract so many different colors from the same mountain,” explains Prvulovic. 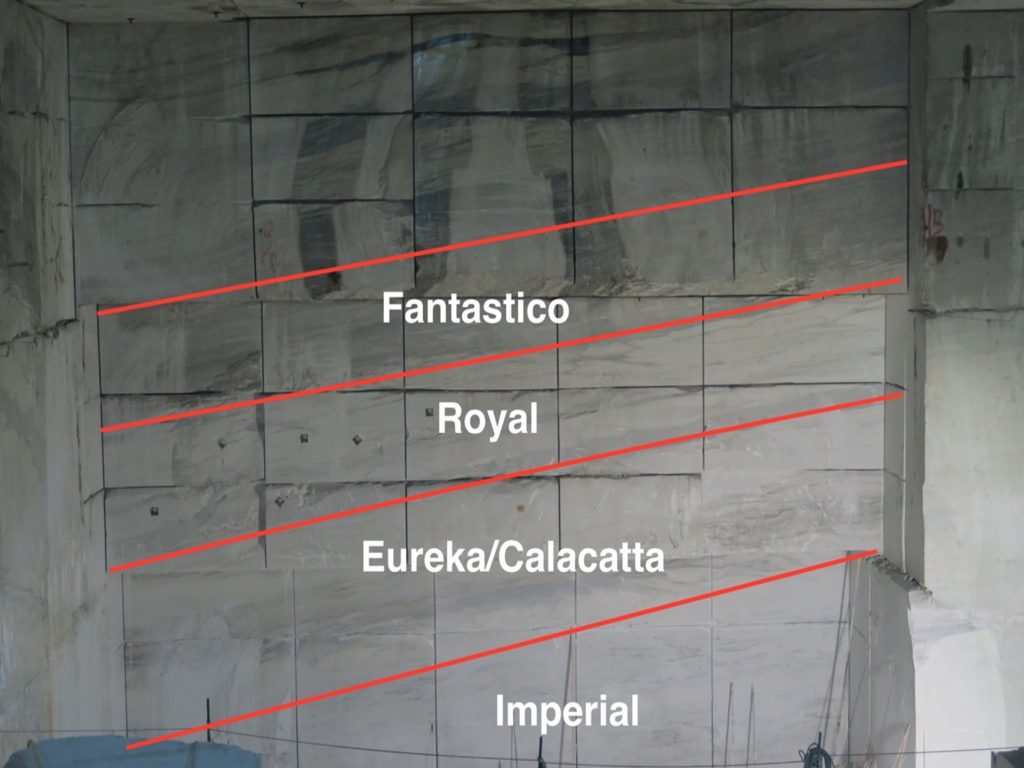 Origins of the marble belt

You can re-create the geology of western Vermont with this simple demonstration. Place a throw rug on a smooth floor, with one end of it up against a wall. Get a brisk running start, then leap onto the throw rug and surf it across the floor and toward the wall. The rug will fold into an accordion of wrinkles (and you may or may not remain upright).

In this exciting re-enactment, you’d be playing the role of a volcanic chain of islands, which collided into the eastern U.S. about 440 million years ago. The throw rug would represent the pre-existing rocks, which were marine sandstones, limestones, and shales. These rocks got caught in a geologic crumple-zone as the collision took formerly flat-lying layers and folded them into long, linear mountain ranges that run roughly north-south up the length of western Vermont. The original sedimentary rocks became recrystallized into metamorphic rocks, and the rock was folded in on itself, transforming ribbons of clay and mica into stunning patterns within the marble.

Danby marble comes from the Shelburne Formation, a thin band of rock that runs down the length of Vermont and on southward into Massachusetts. Many quarries in the region tapped into this same formation, spread out up and down the marble belt.

Mannolini noted that since most of the older quarries have closed, Danby’s importance has grown. “Vermont Danby marble can be used for repairs and restoration of historical marbles of the northeast,” he says.

Despite competition from imported stones and engineered stone products, the public’s desire for authentic Danby marble is unwavering. “Our product has been on an upswing for the last ten years,” says Prvulovic. “We see better and better demand from every side of our country.”

Prvulovic is bullish for the future of the quarry. “We’re never going to be one of those companies that says ‘yep, we got this, this is where we’re staying.’ It doesn’t work that way in this industry.”

Mannolini and his team keeps watch over the geology of the mountain, overseeing periodic surveys of the rock and plotting future development. “We are not worried about running out of marble,” explains Mannolini. Prvulovic quickly chimes in, “Not in our lifetime anyway!”