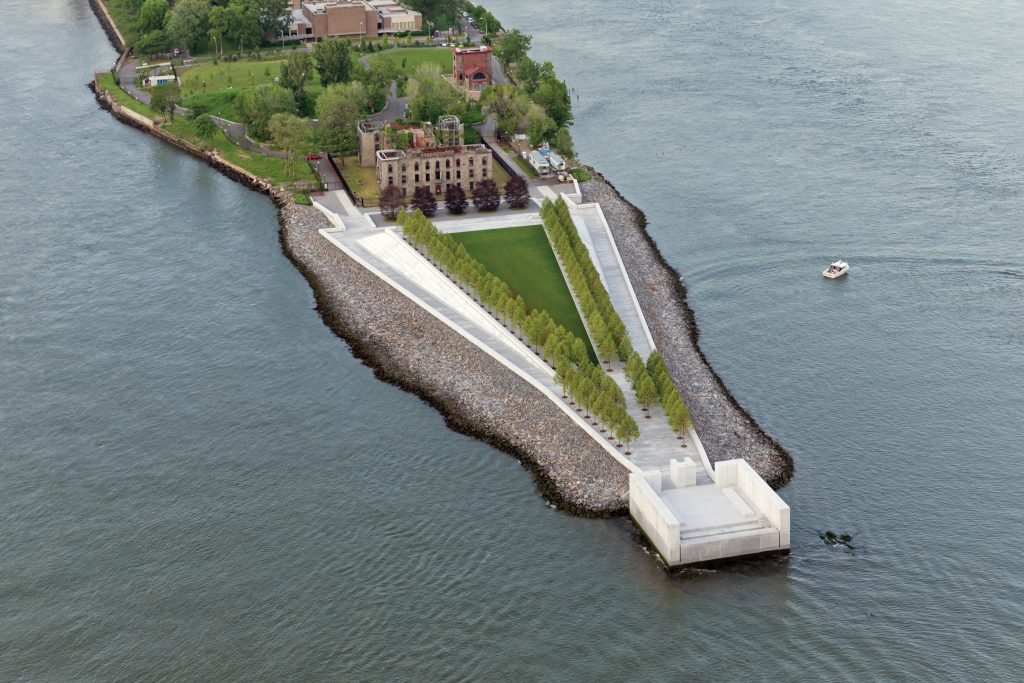 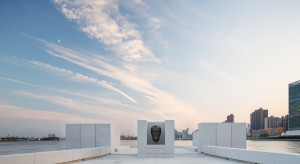 The world-renowned architect Louis I. Kahn, FAIA, was selected to design the memorial — known as the Franklin D. Roosevelt Four Freedoms Park. Kahn looked to the New York-based architectural firm Mitchell/Giurgola Architects, LLP to be the Architect of Record. Although detailed plans were completed in 1973, the project was delayed by Kahn’s unexpected death and remained stagnant until the early 1990s, when New York State undertook a project to reconstruct the sea walls around Roosevelt Island. This reawakened interest in the Four Freedoms Park. In response to vast public interest in Kahn’s work, The Roosevelt Institute formed a subsidiary organization, the Four Freedoms Park, LLC, to carry the FDR Four Freedoms Park project to completion. The necessary funds were raised and construction finally began in March 2010.

Plans for Kahn’s Four Freedoms Park were very thorough, with a distinct conceptual design that embraces two primordial elements: the garden and the room. “The garden represents mankind’s influence over nature, and the room, for Kahn, is the beginning of architecture,” said Paul Broches, FAIA and Partner in Charge at Mitchell/Giurgola. 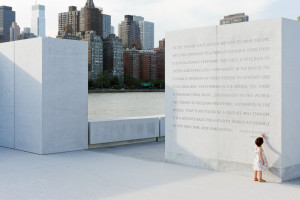 Text from FDR’s Four Freedoms speech delivered to Congress on January 6, 1941 — which highlighted the Four Freedoms: Freedom of Speech and Expression, Freedom of Worship, Freedom from Want and Freedom from Fear — is carved into a pair of 6- x 6- x 12-inch-high granite columns, which also form the backdrop of the sculpture. Photo Credit: Franklin D. Roosevelt for Freedoms Park, © Iwan Baan

Visitors pass through a series of five elements: the Entry, Garden and Promenade, Forecourt, Sculpture Court, and the Room — each of which was geometrically planned out in regard to the stonework. The broad, tree-sheltered entrance is located immediately south of the historical Small Pox Hospital, where the memorial essentially begins. “Visitors can proceed by either climbing a broad stairway to the top of a south sloping lawn bordered on either side by an allée [a straight route with a line of trees running along each side] of little leaf Linden trees; or, by walking along the east or west promenades along the East River’s edge,” said Broches. Both routes — which are protected by low broad granite walls, providing places to sit — lead to a granite-paved Forecourt also bordered by Linden trees. A sculpture court establishes a fitting site for a memorial sculpture of Franklin Delano Roosevelt, facing back toward the Garden. Beyond the sculpture is one of the highlights of the memorial, the Room, a 72-foot square open to the sky and enclosed on three sides by granite columns. Carved into a pair of the granite columns is text from FDR’s Four Freedoms speech, delivered to Congress on January 6, 1941. “The materials of the Memorial are simple and abstract; those of a timeless civic place,” said Broches. “Granite paving, granite walls, and geometrically placed trees are organized to create space and mass. Being inside the Room reveals the River, the United Nations, the skyline, the sky, and the people who share the experience.” 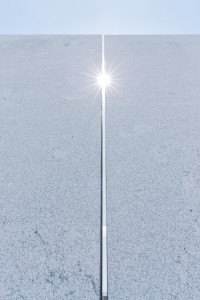 “The Room is actually an open 72-foot square plaza surrounded by 28 freestanding granite columns, each weighing 36 tons separated from the next by a 1-inch gap,” said Broches. Placing the columns only 1-inch apart was one of the most challenging aspects of the project. Photo Credit: Franklin D. Roosevelt for Freedoms Park, © Iwan Baan

The firm faced a handful of challenges due to natural forces, structural issues, climate changes, and precision when constructing the park and reviving the original designs.  “The 35-year hiatus between original concept and commencement of construction was filled with frequent attempts to start up, raise funds, and gather political support,” said Broches. Since Four Freedoms Park is located at the very southern tip of Roosevelt Island, the entire park is vulnerable to potentially enormous storm impacts. In 2012, the first year of the park’s completion, it was blasted by Hurricane Sandy, but was undamaged. “Not a single one of the 120 little leaf Lindens was out of alignment,” said Broches. Another challenge dealt with the structuring of certain aspects of the memorial, such as the foundations and setting of stone. “The Room is an open square plaza surrounded by 28 freestanding granite columns, each weighing 36 tons, separated from the next by a 1-inch gap,” noted Mitchell/Giurgola Architects partner John Kurtz, AIA, site architect of the project. “Of particular concern — and of considerable challenge to engineers Weidlinger and Associates and Langan Engineers — was the design of the foundations to support the enormous gravity load and aggressive lateral wind and water forces.” To resolve the problem, the foundation structure was modified to make it more robust, constructed of granite blocks that were laid horizontally, replacing a concrete base that was to be faced with granite. “Foundation caissons to counter lateral forces and 1-inch diameter stainless steel tie downs were introduced into the columns to restrain against overturning,” said Kurtz. “None of this extensive reinforcement is visible.” Related to the structural challenges were the climate challenges presented by the sea level of the East River. “Due to the rising sea level experienced between 1973 and today, the elevation of the entire project had to be raised. There was a conflict between the desire to respect the rising sea level, but also to preserve the experience of visitors and bring them very close to the water,” said Kurtz. 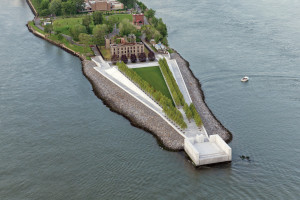 Lastly, Mitchell/Giurgola was faced with ensuring that contractors adhered to the precision of Kahn’s design. “The Kahn design inspired everyone on the project, from stone masons to crane operators, with the precision with which every construction activity had to be carried out.” said Kurtz. The finish on the stone was specified by Kahn to be “saw cut,” i.e., no further work on the surface after the saw passed through it, which was challenging on multiple fronts. “If any damage occurred during any of these steps, that stone risked being rejected, even if it weighed 36 tons,” Kurtz continued. “The real mastery of Kahn’s vision only emerged as construction progressed,” remarked Gina Pollara, former Four Freedoms Park Executive Director. “The work is a study in scale and relativity: dimension and shape shifts as one moves through the site.  The perception of distance expands and contracts.” While Mitchell/Giurgola Architects were confronted by enormous challenges, they were able to carry out Kahn’s original vision.  “We were loyal to the original design, and Kahn was so sure about what he wanted to do; nevertheless, he left some unresolved details that required extraordinary care to fill in the blanks by all members of the project team.” 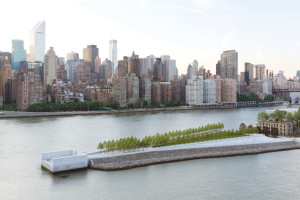 In total, there were 261,000 4-inch hand-placed cobblestone cubes installed throughout the Park, and approximately 10,000 square feet of complex angled embankment stones that vary in size.

North Carolina Granite Corp. of Mt. Airy, NC — the world’s largest open-face quarry — provided all of the granite for the project. A total of 12,100 tons were quarried, producing 7,700 tons of dimensioned granite. Four Freedoms Park was the heaviest stone-setting job undertaken in New York City to date, requiring five different types of cranes and lifts and roughly 100 trained stone setters. The stones were too heavy to be trucked across the only bridge connecting Roosevelt Island to Queens, so all Room stones were trucked to New Jersey and then barged to the construction site. The process of repositioning or “tripping” a granite block of these sizes from a horizontal to a vertical position has not changed since the construction of the pyramids in ancient Egypt, so all stones were set in large sand pits where they could be turned slowly without damaging corners or edges. The project was completed in October 2012, after 30 months of construction. The Park has been very well received since its completion, with over 150,000 visitors in its first year. The project has received numerous awards and has been featured in publications including The New York Times and The Wall Street Journal. “The FDR memorial engages the land and the water,” explained Broches. “It creates a bond between the built world and the natural world, and between the culture of the city and the culture of man. The Memorial embodies the ideals of FDR and transcends them. It is both grounded in the materials of the earth and the ephemera of the sky. It is at once self-contained and infinitely expansive.”